Next on The Scoop: What Cats Would Do With Their Extra Hour of Sunlight
Ask a Vet 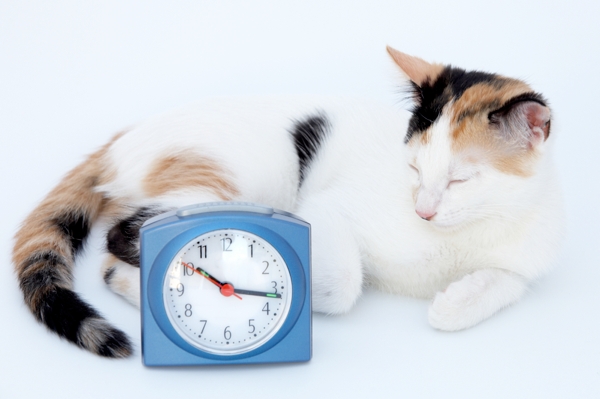 Your mornings might be hard for a few days after you "spring forward," but is your cat affected by Daylight Saving Time?

I love Daylight Saving Time. I love the extra relaxing hour of evening that it provides. I love that it heralds the onset of spring. In my opinion, it’s just about the best possible use for an hour. And let’s face it: An hour isn’t much.

But Daylight Saving Time, which starts Sunday, March 10, this year, has its detractors. Just as alarmists feared that fluoridation of the water supply was a communist plot (a plot, evidently, for Americans to stop suffering from cavities), some people claim that Daylight Saving Time harms health through disruption of circadian rhythms, or leads to excess energy use, or simply represents a lost hour of sleep. Several governments, notably those in Saudi Arabia, North Korea and Arizona, do not recognize Daylight Saving Time.

But, for the sake of thoroughness, let’s revisit those possible health issues. Specifically, because I’m a veterinarian, let’s talk about the potential health issues your pet may suffer as a result of Daylight Saving Time.

Are cats affected by the one-hour time change during Daylight Saving Time? 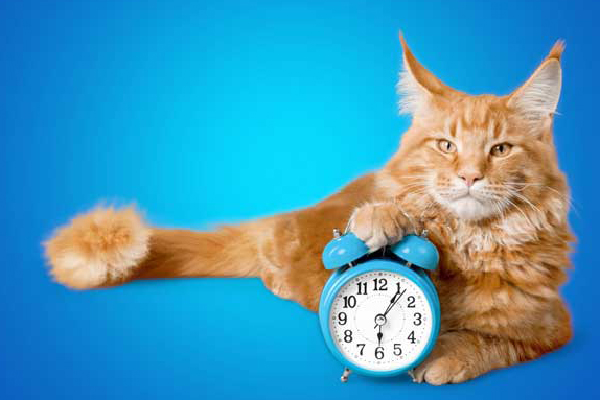 The one-hour time change for Daylight Saving Time probably won’t affect your cat too much. Photography by Billion Photos / Shutterstock.

My experience of the effects of one-hour time changes in pets is this: They are negligible. It’s one thing to fly your cat from Seattle to Mumbai (or Hawaii to Japan). She will experience significant jet lag, not to mention culture shock. It’s another thing to move the clock ahead or back by an hour. In my experience, most pets simply don’t notice. And why would they?

Let’s start with the worst part of Daylight Saving Time: You have to get up for work at a time that feels like an hour earlier for at least a week. Ostensibly, your cat might also have to get up earlier (although I’ll bet many pets simply keep sleeping — I know my dog does). Regardless, I doubt your cat has to worry about getting to work on time. Waking up early isn’t so bad if, rather than heading into the office, you get to lounge around all day like most cats do.

If you regularly sleep six to eight hours a night and then have to high-tail it to work, that lost hour hurts. But what if you’re a cat and you usually sleep 16 to 18 hours out of every 24? If you could go back to sleep for as long as you wanted after the alarm went off (perhaps after first eating breakfast), would you really notice if the alarm went off an hour earlier, never mind the scrambling and complaining your owner was doing?

Cats and dogs are highly adaptable. Part of their job is to adjust to our schedules. Do you and your cat wake up at precisely the same time every day?  I certainly hope not. If you do, I hereby diagnose your pet’s life as boring. (I am precluded by law from diagnosing your life as boring, but you can draw your own conclusions.) In that case, I recommend that you try to shake things up a bit. You and your cat will be happier for it.

If you have to go into work early, Miss Tibbs adapts. If you get to sleep in on a Saturday, Fluffy sleeps in too. Cats and dogs can roll with these sorts of changes, and for the vastly overwhelming majority of them, an hour here or there won’t be a big deal.

Remember that both species were domesticated before humans had invented the concept of time. Outside of the tropics, photoperiods (the lengths of each day) vary with the seasons. Human schedules differed with the length of each day, and our pets’ schedules varied right along with ours.

That said, there is one veterinary-specific aspect of the time change that should be addressed: medications. Many pet meds are prescribed to be given at intervals of eight, 12, or 24 hours. If your cat normally receives her thyroid medication at 8 a.m. and 8 p.m., what should you do when the time changes? Continue to administer it at last week’s time, or adjust to the change and administer it at 9 and 9 until Standard Time returns?

In the overwhelming majority of cases, it doesn’t matter. With rare exceptions (which generally involve medications that normally would be administered only in an ICU setting), giving your kitty her medicine an hour early or late won’t make any difference at all.

There are, however, a couple of exceptions. The first is insulin, which is used to treat diabetes. If you give your cat her dose too early, it could lead to dangerous low blood sugar levels. The good news is that, even for insulin, the risks of changing the timing of administration by an hour are very small. It probably won’t matter. However, if your pet is diabetic, check with your vet about how this drug should be administered after the time change.

Another exception is furosemide, also known as Lasix, which is used to treat heart failure. Again, for most pets, an hour’s difference in timing probably won’t matter. But if you want to be safe, discuss it with your vet this week.

If you’re still worried that Daylight Saving Time is bad, I have two propositions. First, and most simply, why bother changing the clock at all? This would eliminate time changes and the minor complications they cause.

If year-round Daylight Saving Time is unpalatable, then I have an idea that everyone surely would accept. Let’s change the timing of the time change.

Instead of boringly switching over at 2 a.m. on Sundays, wouldn’t it be better to “spring forward” at 4 p.m. on Friday? It’d certainly make the weekend get here faster. And we could then “fall back” at 5 a.m. Monday. The new timing would lead to one better Friday and one better Monday each year, with no downside that any person would notice. And, like the current time change regimen, it would have negligible effect on our pets.

Learn more about your cats and sleeping on Catster.com:

4 comments on “Will Daylight Saving Time Make My Cat Bonkers?”