Next on The Scoop: Hello Kitty Grand Café
Catster Magazine 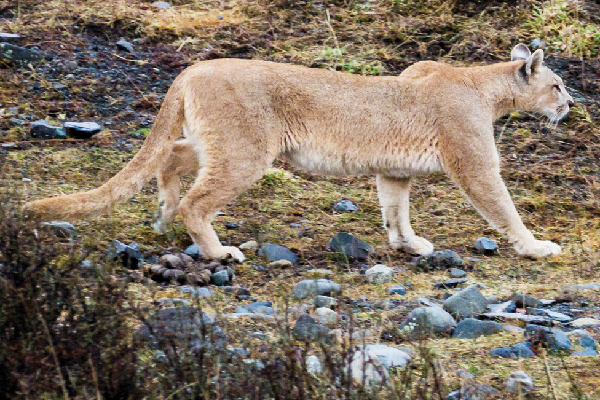 Get Up Close and Personal With Mountain Lions, or Pumas, in Chile

Looking to see pumas — a.k.a. mountain lions or cougars? A puma trekking trip in Chile's Patagonia region might be your best bet.

I’ve seen lions, leopards and cheetahs in the wild, but even though I live in, hike and mountain bike in cougar country — Southern California — I’ve never seen a mountain lion. The second largest big cat in the Americas, outranked only by the jaguar, the mountain lion has a reputation for being secretive and stealthy. But in Chile, pumas, as the tawny cats are known there, are making a name for themselves in tourist circles. Patagonia is becoming the go-to place to see pumas in the wild.

Chile and Its Mountain Lions or Pumas

Chile is unusual for its dearth of predators. Pumas, as well as raptors like the Andean condor, are the primary threats to prey animals. Their range takes them from the country’s far north all the way south to the Strait of Magellan. In Patagonia, where prey is abundant, pumas tend to be larger than in the rest of the Americas. They feed on guanacos (relatives of the llama), hares, geese, rheas (distant relatives of ostrich and emu) and, along the coast, penguins.

Because pumas rule the Patagonian landscape, which is populated more by sheep, cattle and guanacos than by humans, they stalk fearlessly over the grasslands, little deigning to notice the humans who have come to see them. They are much more interested in hunting a pair of hares near Hotel Las Torres in Torres del Paine National Park, ignoring the tourists following behind them with binoculars and cameras.

A number of hotels in the area now offer puma trekking trips in which guests go out with a guide familiar with the animals’ habits. While they might not be as visible or accessible as the lions ubiquitous in Africa, with a good guide, visitors stand an excellent chance of seeing them. “Guiding is always the most important part,” says wildlife biologist Bill Given, owner and founder of travel company The Wild Source. “You need guides with local knowledge to know the best locations and the different individuals and their habits. Mountain lions, or pumas as they’re called here, often have regular habits. They like to patrol a certain area. That’s their known range, and they’ll come through on a regular time sequence.”

It snowed heavily our first day out, and the pumas slept in, but we were fortunate to have sightings on the second and third days, including the aforementioned hare hunt (both hares easily eluded the puma and lived to hop another day) and a pair of pumas mating.

While we weren’t fortunate enough to see them, some smaller, lesser-known cats also make their homes throughout the rugged Chilean countryside, which ranges from mountains to desert to coast.

One of the rarest is the Andean mountain cat (Leopardus jacobita), typically found at elevations of 5,900 feet or higher, and little seen except on camera traps. Weighing about 9 pounds, they sport a silver-gray coat with brownish-yellow patches on the body and a thick, bushy, banded tail.

The colocolo (Leopardus colocolo), also known as the pampas cat, is even smaller, weighing in at 4 to 8 pounds. Like the puma, colocolos are at home in many different habitats, including grassland, woodland, marshes, open forests, semi-arid desert and steppe country up to 16,000 feet. Their appearance varies, ranging from smoky gray to dark rusty brown to russet spotting. Colocolos dine on small mammals, rodents, reptiles, birds, eggs and beetles.

One of the more common cats in South America is Geoffroy’s cat (Leopardus geoffroyi), named after 19th-century French zoologist Etienne Geoffroy Saint-Hilaire. In Chile, the Geoffroy’s cat is found in the Andes, Araucania, Aysen and Magallanes regions. Little bigger than a domestic cat at 7 to 17 pounds, the spotted feline with the yellow-brown to silver-gray coat has a tail that can make up a third of the body’s total length. Geoffroy’s cat hunts rodents, hares, frogs and fish, among other small prey. Unusual habit: His “litter box” is in the treetops.

Least in size of the wildcats of the Americas, the kodkod, or guigna (Leopardus guigna), weighs 4 to 6 pounds. The tiny night stalker travels across treetops in Chile’s Coquimbo and Aysen regions in search of rodents, birds and reptiles. His grayish-brown to russet coat has small dark spots on the body, irregular lines on the upper back and neck, and dark stripes beneath the eyes, giving him the appearance of a puma kitten.

Kim Campbell Thornton has written about cats and dogs for more than 30 years. She is the author of more than two dozen books and hundreds of articles on pet care, health and behavior.