Next on The Scoop: The Bengal: What to Know About This Spotted Beauty 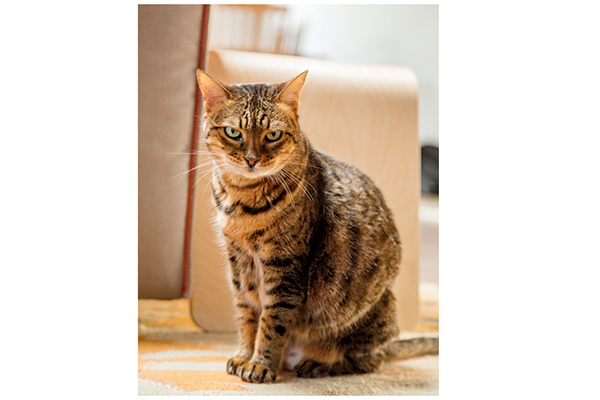 Stella tells all about fireworks and the stress they may cause for cats.

The Fourth of July can be a stressful time for our kitties, what with the flashes and bangs and scent of gunpowder in the air. I asked my cat, Stella, what I could do to make the evening more pleasant for her.

Stella, I’m worried about fireworks scaring you this Fourth of July. Do you think you’ll be OK? Can I set you up a safe area in the back bedroom?
Remind me of the laws about class A fireworks again?

Um, they’re illegal?
Yeah, but is California Health & Safety Code section 12677 actually enforced, you know, for a non-commercial display in a residential area lasting let’s say a half-hour for an audience of mostly animals?

I really have no idea. You seem to know a lot about fireworks.
I’m just wondering about the police response if someone, hypothetically, were to launch 10 pounds of ‘works shipped overnight from Mexico.

Why are you wondering that?
Just bored. Exercising my brain.

Well, good for you, I guess. In other news, we got another package to hold for our new neighbor Madame S. Katte.
Great. Just put it with the others in the back bedroom.

I still have a hard time believing someone moved in, in the dead of night and told you to accept her packages when she went off on vacation.
You know I’m up all hours of the night.

You’re a cat.
Maybe she thought I was a dog.

People don’t go around telling animals to accept their packages for them.
Maybe she thought I was your daughter! You know, in the moonlight I look like a 13-year-old YouTube makeup prodigy.

You do not.
Don’t be cruel!

Back to the Fourth, Stella. I just want to know if you’re going to be OK if I go out.
Relax, I’ll be fine. I’ll just hole up in the back room with the packages.

Huh.
And a bucket of water, in case I can’t work the fire extinguishers.

I’m starting to think I shouldn’t leave the house, Stella.
Oh, come on! What fun is hiding from fireworks if you’re here?

I’m also starting to think I should look inside those packages.
You will not! Tampering with the mail is a federal offense. Those belong to Madame S. Katte.

AKA Stella the cat?
So what if we have similar names? She’s a classy lady.

Stella, if you stole my credit card number to buy fireworks I’m going to be really angry.
You NEVER let me launch fireworks. What kind of cat owner are you?

The aggrieved kind.
Just ONE TIME I want to launch a Roman candle. Is that too much to ask? Actually, 50 Roman candles.

Listen, how about we compromise with a sparkler? Did you buy a pack?
I bought a thousand packs. We’ll light up the block.

I’ll be glad when this holiday is over.
Do you need a safe space? I can put some blankets and beef jerky in the closet.

Stella, a Bengal, has a firm grip on her handler, freelance writer Michael Leaverton, whom she rescued from an alt weekly many meals ago. They live in San Diego.