Next on The Scoop: 7 of My Biggest Pet Peeves Related to Cats
Catster Tips

Fat Cat Epidemic: 5 Signs That Your Cat Is Obese

For Pet Obesity Awareness Day, learn to recognize the signs of an overweight cat and how to develop a weight-loss strategy if your cat needs one.

With glaring problems right in front of them, people freak out and lose their minds over the strangest and most remote things, like the Ebola virus or voter fraud. There is a huge problem in America, and chances are it’s purring in your lap or taking up half the couch. We’re talking about cat obesity. 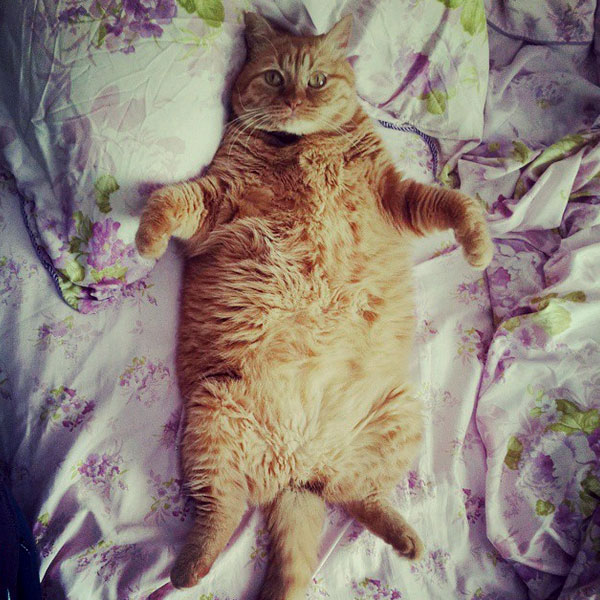 No matter what research you’re consulting, more than half of the cats in the United States right now are overweight, and many are obese. The ASPCA estimates that about a third of American households have at least one cat, for a total number of 74-96 million cats in our homes. That means there are between 37-48 overweight or obese cats. Every other person reading this has an overweight cat. 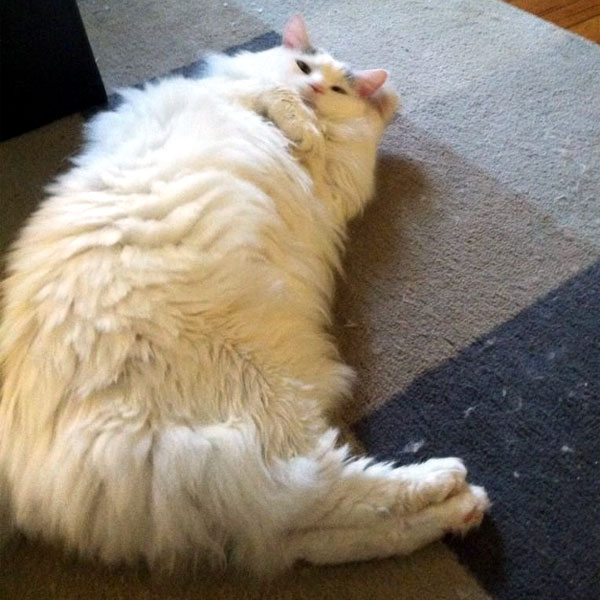 Cat owners and domesticity are partly at issue. We tend to overfeed our cats. That many cats spend the vast majority of their lifespans indoors means they have no predators, and therefore no inducement to do much of anything in the way of physical activity. Cats seem content to sit there, and we are content to allow it. Let’s be clear, though; we’re not fat-shaming cats or blaming cat owners, simply providing context and information. 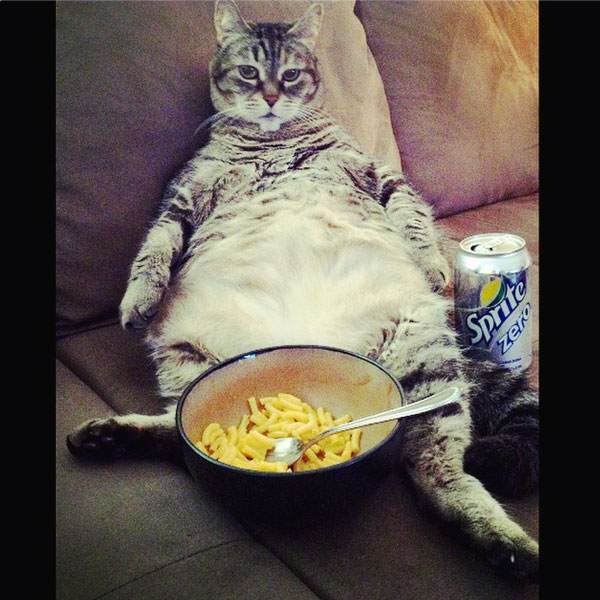 How can you tell if your cat is overweight?

It is unsurprising to learn that cat body types vary widely among various cat breeds. Some, like the Maine Coon, for instance, are larger and heavier by nature. It is simplistic, but ballpark enough, to say that that the average cat’s normal healthy weight is between seven and 11 pounds. Terms like “overweight” and “obese” take on different meanings accordingly. 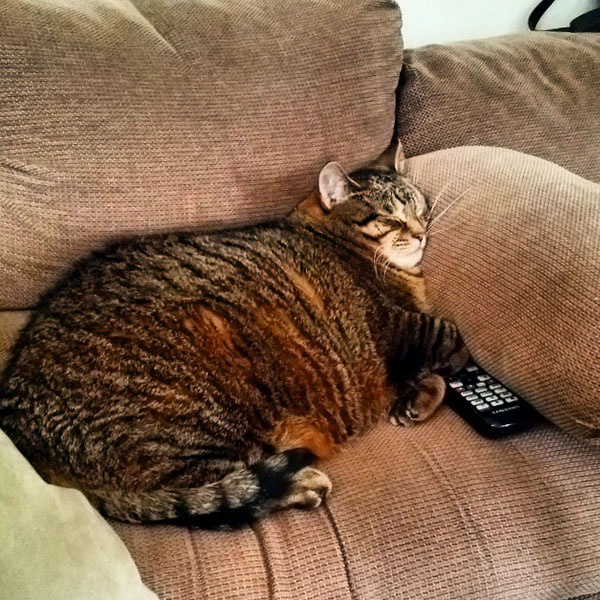 If obesity is defined as being 20 percent over standard, that means that even four or five extra pounds can make a significant difference to your cat’s lifespan and the quality of life she leads.

Too much fat on a cat’s body has system-wide ramifications on a cat’s health. A cat who is obese may have regular trouble breathing, which may be audible. Snoring during sleep is similar. The sound you’re hearing is the cat’s lungs struggling to inflate with fresh oxygen and the relief when she is able to exhale. 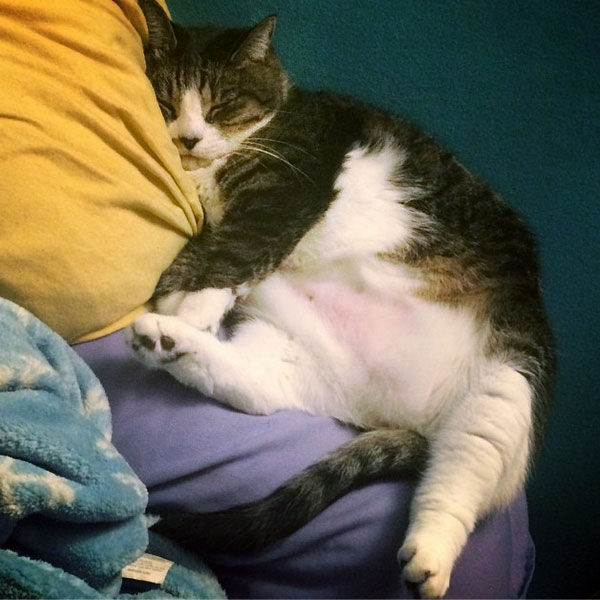 Insufficient oxygen affects all of a cat’s vital systems and can lead to cumulative issues like congestive heart failure, as well as chronic liver and kidney problems.

Sign 2: Your cat is less active, not as playful

Of course, as cats age, they slow down. Some weight gain is also typical with age. We’re talking about normal, prime-of-life cats, who once leapt onto counters, now seemingly missing jumps onto the couch. Overweight cats who are carrying around extra pounds, or obese cats with even more, run the risk of long-term damage to their bones, joints, and ligaments. 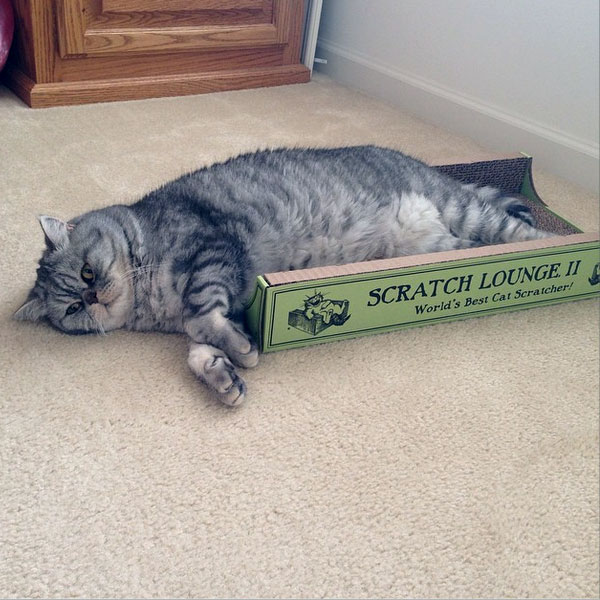 Osteoarthritis is common in obese cats, as is ligament damage in their leg joints. A cat who is losing a step or two may well be seeing the early onset of arthritis or spinal problems.

An overweight cat is less able to perform his wonted daily grooming, and obese cats nearly incapable. The longer this persists, the more quickly the condition of their skin and coat will deteriorate. With excess skin oils and dandruff, there is also every chance a cat may be developing skin infections. A cat who is leaving body prints on bedsheets or is clearly not flake-free for extended periods may be obese. 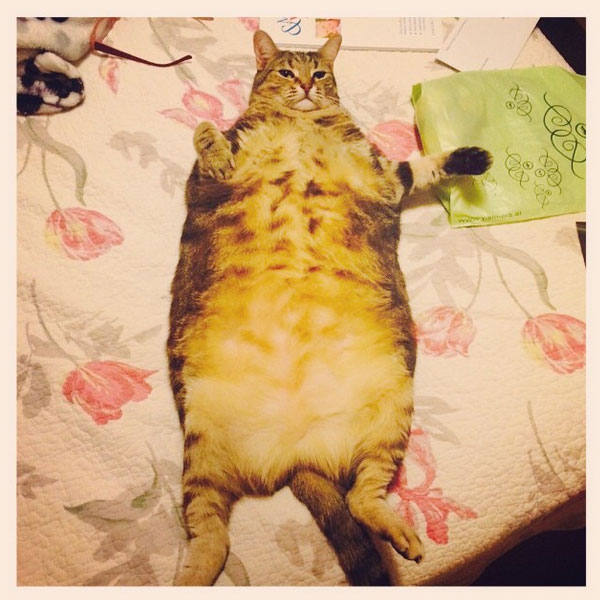 And this isn’t the half of it, because standard cat grooming also takes into account their hind parts and all points of egress for urine and feces. Which leads to our fourth sign: 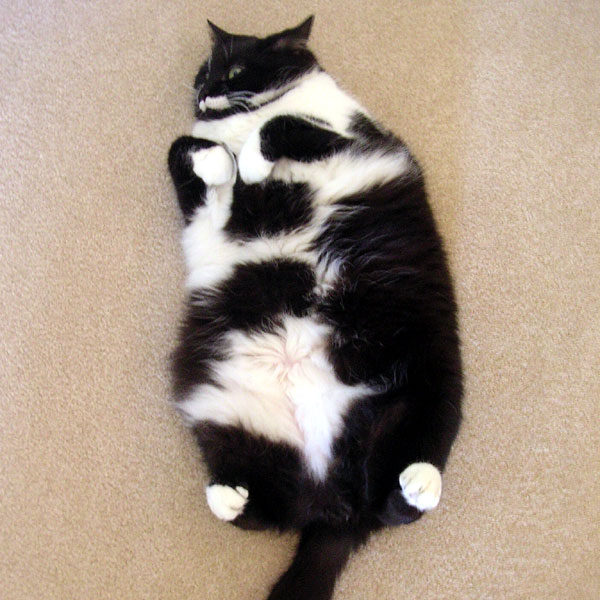 Viewed from overhead, a cat’s body tends to tuck inward between the ribs and the hips. From the side, or in profile, a normal-weight cat’s abdomen tends to be a relatively straight line from the ribs to the hips. The lower the stomach hangs as you approach the hips, the greater chance your cat is overweight or obese. 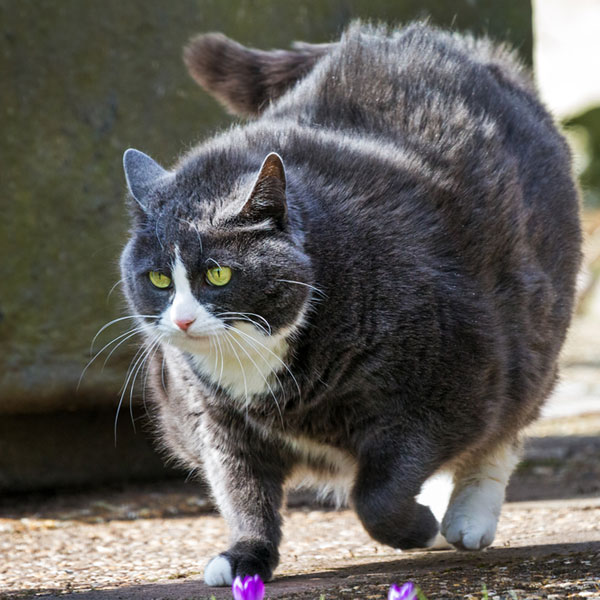 What can cat owners do?

First of all, don’t panic. A cat shouldn’t fast, nor should she be starved. Cat weight loss should be programmatic, consistent, and most importantly — most vitally — gradual and incremental. Feline obesity is a serious problem and one that should always be tackled in consultation with a veterinarian. Rapid weight loss is dangerous for anyone, especially cats, who should have a goal of losing half to three-quarters of a pound per month. 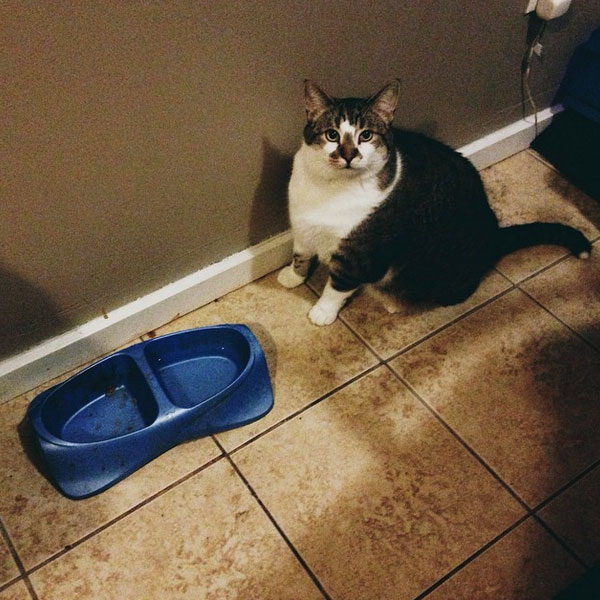 Along with possible changes in food and portions, exercise is essential to cat weight loss. A cat exercising? I can envision thousands of Catster readers rolling their eyes simultaneously at the very notion. A new cat tree? Cat toys? You know what activities appeal to your cat better than anyone. Use your knowledge to your cat’s advantage. October 8 has been designated Pet Obesity Awareness Day, but addressing the issue will take time and concerted effort on all sides.