Next on The Scoop: Steinbeck’s Lost Cat Tale
Cats In History

Ever wonder if there's a reason for those waving cats you see? They’re called Maneki Neko — a.k.a. Lucky Cats or Fortune Cats — and this is their story.

If you’ve ever visited a Chinese or Japanese restaurant, Asian supermarket, or any Chinatown shop for that matter, you’ve probably noticed a little cat figurine perched quietly by the cash register. This Fortune Cat, or Maneki Neko, is a lucky cat charm that’s very popular in Japanese and Chinese cultures. The Maneki Neko is a talisman that is believed to attract good luck and fortune for its owners. Thus, it’s very common to find a Maneki Neko on display in stores, restaurants and other businesses.

Aside from finding it really cute, I never knew the meaning behind the “Fortune Cat” other than it was supposed to be lucky. Being a curious cat, I decided to delve further and uncovered five interesting facts about the cheeky little Maneki Neko. 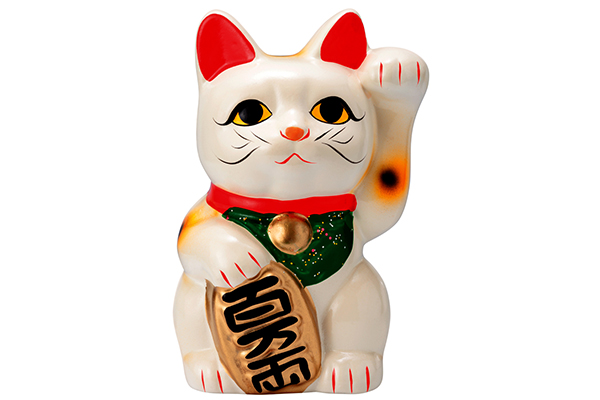 A Maneki Neko is also known as a Lucky Cat or Fortune Cat. Photography by Danny Smythe / Shutterstock.

Fortune Cat is known as Maneki Neko in Japanese, which means “beckoning cat.” The cat has its paw raised as if it’s waving in good fortune for its owners. Other common monikers include Lucky Cat, Money Cat, Waving Cat and Welcoming Cat.

2. The Legends Behind the Maneki Neko

No one can quite agree as to how the first Maneki Neko came to be. However, most will agree that Lucky Cats first appeared during the Edo period in Japan (17th century to mid-19th century).

There are a couple of popular legends about the origins of the Maneki Neko. The first tells of a wealthy man who took shelter from a rainstorm under a tree next to a temple. He noticed a cat that seemed to be beckoning to him, so he followed it inside the temple. Shortly thereafter, lightning struck the tree he had been standing under. Because the cat had saved his life, the man was so grateful, he became a benefactor of the temple and brought it much prosperity. When he passed away, a statue of the cat was made in his honor.

Another common legend surrounding the Maneki Neko is a really peculiar one. A geisha had a pet cat that she adored. One day, it was tugging at her kimono and the owner of the brothel thought the cat was possessed, so he sliced off its head with a sword. (Yeah, gruesome! No cats were harmed in the writing of this article.) The flying cat head landed on a snake about to strike and the fangs killed the snake and saved the woman. The geisha was so distraught by the loss of her cat that one of her customers made a statue of the cat to cheer her up.

3. The Significance of the Raised Maneki Neko Paw

There’s actually a meaning behind which paw the Maneki Neko cat is holding up. If it’s the left paw, this is supposed to attract customers. If the right paw is raised, this invites good fortune and money.

They both sound pretty good to me, which is why sometimes you can find a Fortune Cat with both of its paws in the air. Two paws up can also represent protection.

4. The Symbolism Behind the Maneki Neko Colors

While you’ll most commonly see a white Maneki Neko with orange and black spots, there are quite a few color variations of the Maneki Neko and they each have a special meaning.

5. The Meaning Behind What the Maneki Neko Is Wearing and Holding

Maneki Neko is a finely dressed cat usually adorned with a bib, collar and bell. In the Edo period, it was common for wealthy people to dress their pet cats this way; a bell was tied to the collar so that owners could keep track of their cats’ whereabouts.

Fortune Cat figurines often holding other things in their paws. These include:

Regardless of the name, legend, raised paw, color or item in its paw, you basically can’t go wrong with a Maneki Neko perched by your side.

Tell us: Do you have any Maneki Neko in your home or place of business?

This piece was originally published in 2012.

Holly Tse is a Green Cat Expert. She is the author of Make Your Own Cat Toys: Saving the Planet One Cat Toy at a Time and the creator of GreenLittleCat.com, the longest-running blog dedicated exclusively to greener living ideas for cats and cat lovers. Her book, blog, and articles have been featured on Oregon Live, The Daily Cat, AdoptaPet.com and Catster.com, as well as in magazines such as All You and Feline Wellness. Holly is a lifelong environmentalist who draws her inspiration from her cat, Furball, who has been living an eco-friendly lifestyle since he was adopted as a kitten. Holly’s mission is to green the planet one cat at a time by offering simple and fun advice for cat lovers all over the world.