Next on The Scoop: 4 Reasons Our Cats Love Us
Catster Tips 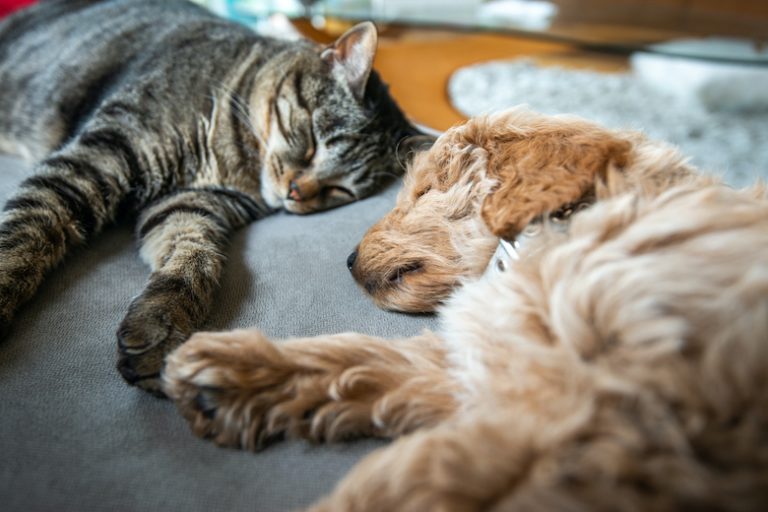 Can This Relationship Work? Tips for Keeping Dogs and Cats Together

Some dogs and cats become great friends, and really enjoy each other’s company. More realistically, many dogs and cats sharing the same abode learn to tolerate each other.

There are dog people, there are cat people, and there is a substantial number of people who love both canines and felines. If you fall into the latter category, you should prove able to keep dogs and cats under the same roof safely with proper planning and training.

Some dogs and cats become great friends, and really enjoy each other’s company. More realistically, many dogs and cats sharing the same abode learn to tolerate each other.

When your household includes dogs and cats, your goal is a harmonious home, where neither species feels threatened or bullied by the other. A harmonious home doesn’t happen overnight, but it is achievable with most cats and dogs.

For best results, adopt or acquire a puppy or kitten at about the same time. Canines and felines who start sharing a household before their first birthdays usually adjust with the fewest issues.

Ideally, introduce a puppy and kitten by the age of 16 weeks. This is the peak socialization period for these youngsters. They are both exploring and learning about the world, and they are often happy to make a new little friend.

Animals brought together as adults can still do well. If you are adopting a cat or dog, look for one with a prior history of living with the other species. A calm adult dog is probably a better choice for joining a household already containing a cat than a high-energy canine.

Dogs with high prey drive pose a greater danger to cats than those who don’t possess a strong instinct to hunt down and capture prey.  Some dog breeds to avoid if you want a cat in the home include:

In general, terriers are not good with cats, because they were originally bred to kill other, smaller creatures. While there is no doubt that individual dogs from breeds with high prey drive may get along with cats, they are the exception.

Other dog breeds usually fare pretty well with felines. These include:

The American Kennel Club recommends dogs from the toy group as cat companions, as well as those from the sporting group. Toys, as the name implies, are bred to serve as loving lapdogs. Most are the same size or smaller than the average cat. The sporting group includes spaniels, retrievers, and setters. These good-natured dogs like to please and make friends, and their sociable nature makes them potential cat buddies.

Dogs from the herding group, such as the various types of collies, may get along with felines, but their herding instinct can make a cat’s life difficult. While the term “herding cats” refers to attempts to control the uncontrollable, that won’t stop a determined border collie or similar breed. 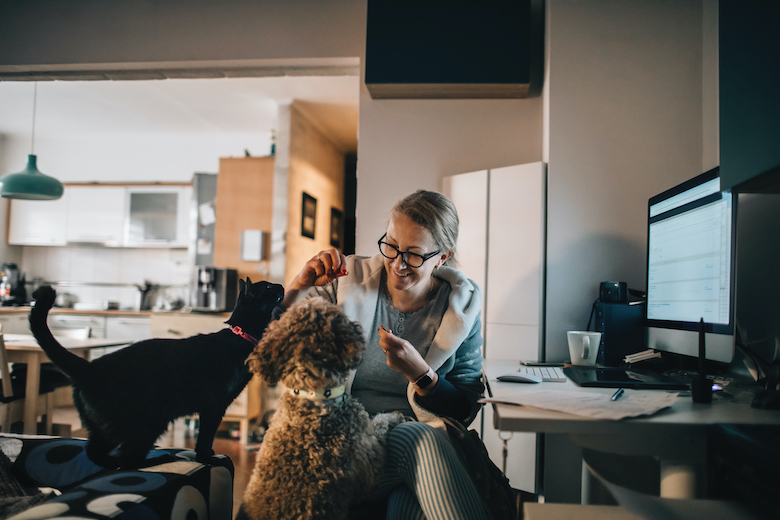 How to introduce your cat to your dog or vice versa

You may want to keep the animals separated for the first few days so they can get used to each other’s scent. Place towels, bedding, or blankets used by the other pet in the areas in which each is confined.

When the initial meeting occurs, allow the pets in the same room but keep the dog leashed and let the cat loose. Kitty establishes the tone.

Stay calm and let them check each other out without getting too close. Wait until they are basically ignoring each other and separate them again. This is a process you may have to repeat for several days until they show little interest in the other.

Even if they seem to get along, do not leave them alone unsupervised for at least a month. You must ensure neither will hurt the other. For peace of mind, you may always want to separate them if no one is home for much of the day.

If you already have a dog and are thinking of adding a cat, ensure your canine has basic obedience training. He must know and obey terms such as “leave it” if he starts annoying Kitty.

Cats with claws will defend themselves, and that could mean swiping at a dog’s eyes. Keep Kitty’s claws trimmed to minimize potential damage.

Food can quickly become a source of conflict, so make sure Fido and Fluffy are always fed separately.

Give your cat plenty of privacy when it comes to the litter box. Not only are most dogs inordinately fond of litter box deposits, but even if they cannot access the litter box their presence anywhere near it can intimidate cats. A dog in the home can cause a cat to start eliminating inappropriately, as the euphemism goes, but that is sometimes due to a lack of solitude while conducting this business.

Make sure each pet has their own safe space, where they can get away from each other.

Patience is a virtue

Depending on the pets involved, a dog and cat can learn to tolerate each other right away, or the process could take weeks. Sometimes, a dog and cat are truly incompatible and you may have to rehome the newer arrival. Most, however, will eventually accept the other’s presence with no fuss. You know instinctively when harmony in the home is achieved.

Read Next: How to Introduce Your Cat to a New Baby

One comment on “Can This Relationship Work? Tips for Keeping Dogs and Cats Together”