Next on The Scoop: A Fabulous Feline Artist
Ask a Behaviorist 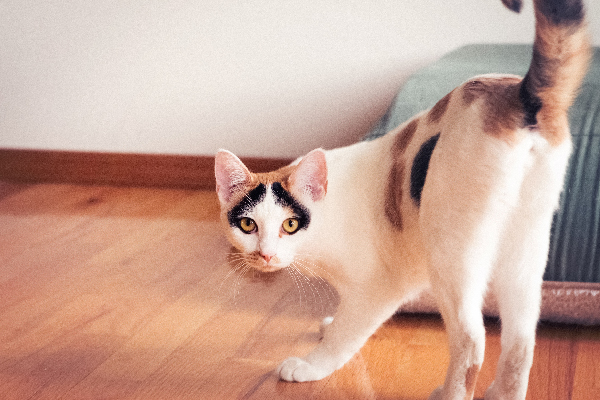 Cat Spraying — Why Does It Happen and What Can You Do?

All cats — male and female, fixed or not — can spray. Check out these reasons for cats spraying, what to do when it happens and how to stop it.

Cats don’t need high-tech devices to communicate. In addition to body language, vocalizing, scratching objects and rubbing, they use urine to broadcast their intentions and emotions. Cat spraying, which is one form of urine marking, is not hugely popular with people, especially when done indoors.

It can be difficult to tell the difference between cat peeing and cat spraying because some cats stand instead of squat while urinating. The smell and the amount of urine indicate whether it’s urinating or a cat spraying behavior. Spray is highly pungent because it contains pheromones. This unpleasant smell sometimes is the only indicator that cats have sprayed in the house. One positive note is that less urine is deposited when cats spray than when they urinate.

Kitties are sometimes caught in the act — backing up to a vertical surface, treading with the front paws, and quickly twitching their tails while spraying. Simultaneously, they may close their eyes.

The reasons behind cat spraying 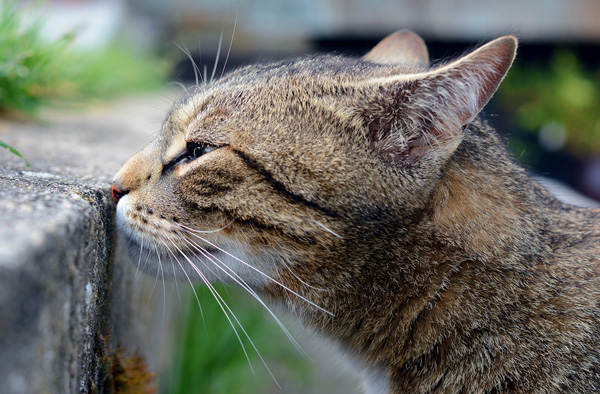 Cat spraying is a form of communication: broadcasting availability and emotions of the spraying cat. Photography by DavidTB / Shutterstock.

Urine is a powerful communication tool — cats can tell a great deal about each other from it including age, sex, status and sexual availability. Although adult cats of both genders, whole as well as fixed, might spray under specific circumstances, intact ones are most often guilty of the smelly behavior.

Whole males, as a rule, are prone to cat spraying behaviors. Pheromones, released into the urine, advertise they’re ready, willing and on the alert for girlfriends. Additionally, cat spraying broadcasts clear messages to other male cats to stay away. Intact female cats spray, too — the chemicals in their urine indicate where they are in their cycle.

Spray from intact cats is more pungent than from those who are fixed. The unpleasant smell is easier to detect from a distance — important for advertising for a special friend.

What causes cat spraying in spayed and neutered cats

Although spayed and neutered cats aren’t looking to connect with members of the opposite sex, they have other reasons to engage in cat spraying including …

Cat spraying is the feline version of drawing lines in the sand and putting up “no trespassing” signs. Kitties are territorial — the far-reaching effects of the pungent urine lets other animals in the hood know the extent of their stomping grounds.

Inside cats sometimes spray around doors and windows when they see or smell unfamiliar cats hanging out around their homes. They spray to mark territories and because they can’t reach the intruders to chase them away or engage with them. Often, the unwelcome visitors leave their own calling cards, which the resident felines smell.

3. Recognizing their own scents

Cats sometimes will spray inside their territories so they can smell and recognize their own scents.

Some cats will spray new furniture or objects that are brought into their homes.

Insecurities and stress can trigger cat spraying. Some cats are more sensitive than others, responding by marking to situations such as other cats, household changes, owners traveling, illness, new household pets and even schedule changes.

Some cats will spray their favorite people’s belongings in an effort to mix scents together and create a bond. Another reason is for security. Stressed, fearful cats will sometimes spray objects that smell like their owners, helping the cats feel a little more secure.

7. Not adjusting to change

Some cats do not adjust well to household changes, including problems between the humans residents, a new baby, schedule changes, moving and remodeling.

Conflicts in multicat households can cause cat spraying. Stressed, anxious and threatened felines will spray in order to communicate status and territorial boundaries. In theory, the smelly behavior might keep cats from fighting. Cats who engage in hostilities often are scratched and bitten. Settling wars through cat spraying is much safer.

How to stop cat spraying

The following tips and suggestions help stop cat spraying, and they also help stop the behavior before it begins:

Never punish cats when they spray. Don’t yell, rub noses in the urine, or hit them. Those responses will cause kitties to feel more stressed and escalate behaviors. Sadly, it also breaks the bonds between them and the punisher. Kitties aren’t being bad — they have good reasons for marking. Instead, identify the causes for the behavior and address them.

2. Use an enzyme cleaner

Thoroughly clean marked areas with an effective enzyme cleaner. It might take a couple of applications until the smell is eliminated.

Change your cat’s association with the targeted areas after the areas have been cleaned with the enzyme cleaner. Do activities she enjoys such as playing, petting and clicker training on the areas. Placing toys and scratchers near them will also change how she relates to the sprayed spots.

Using synthetic pheromones around the marked areas can help calm and relax your cat.

Temporarily keep your kitty out of the rooms that are being sprayed.

If your cat is spraying a family member’s belongings, encourage the person to feed, play, and interact with the kitty every day.

Increase the resources to reduce the competition in multi-cat households. Provide more vertical territory, hiding places, scratchers, and toys throughout your home. You might need to add feeding stations, placing them a distance from each other. Make sure there are enough clean litter boxes — one per cat, plus one, and place them in different areas of your home. Sometimes separating warring cats from each other and gradually reintroducing them will stop the squabbling and cat spraying behaviors.

Keep neighborhood cats off your property by placing safe deterrents around the outside perimeter of your home. Temporarily block your kitty’s view of the unwelcome visitors by covering windows. After the intruders stop visiting, uncover the windows.

Help your cat feel more secure and less anxious by doing activities she enjoys every day, such as playing, treasure hunts and clicker training.

Before assuming your cat has a behavior challenge, have a veterinarian examine her in order to rule out any possible medical problems that could be causing her to spray.

Newly adopted kitties need to be separated from your resident felines and gradually introduced. It might take a month or longer to introduce them to each other with a minimum of stress.

Some final thoughts on cat spraying

Although cat spraying can happen with any cat, it is a behavior that intact cats are more likely to engage in than those who are fixed. Once the reasons for the smelly behavior are identified, you should be able to stop it or at least reduce the occurrences by addressing the causes and modifying the environment.

Can’t tell if your cat sprayed and not sure how to clean it up? Follow these tips >>

Got a cat behavior question for Marilyn? Ask our behaviorist in the comments below and you might be featured in an upcoming column. If you suspect a behavioral problem, always rule out any possible medical issues that may be causing the behavior by first having your cat examined by a veterinarian.

She is also an award winning author. Her book Naughty No More! focuses on solving cat behavior problems through clicker training and other positive reinforcement methods. Marilyn is big on education — she feels it is important for cat parents to know the reasons behind their cat’s behaviors. She is a frequent guest on television and radio, answering cat behavior questions and helping people understand their cats.

What Exactly Is A Mackerel Tabby Cat?

58 comments on “Cat Spraying — Why Does It Happen and What Can You Do?”