Next on The Scoop: Are Cat Whiskers Good Luck? 5 Myths and Superstitions Surrounding Cat Whiskers
Behavior 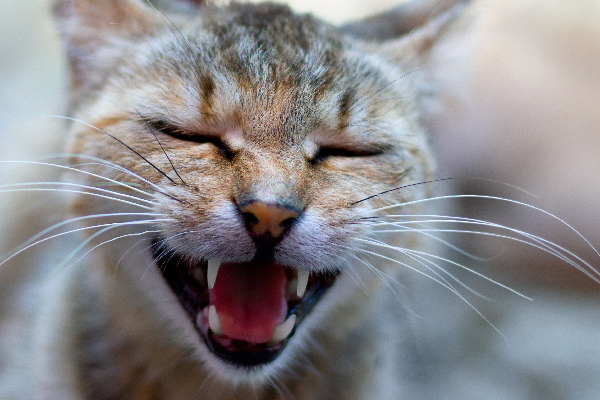 Cat Screaming — What It Sounds Like and What It Means

Is your cat screaming — or are you not sure what this cat noise sounds like? And why do cats scream? Let’s talk about what causes cat screaming and which cats are most likely to scream.

For those who have heard a cat scream, the sound is unforgettable — a piercing, multisyllabic yowl that shocks the senses and demands your undivided attention. A screaming cat can wake you from even the deepest sleep. Cat screaming may conjure up Halloween-type images of arched backs, extended claws and bared fangs. And most importantly, cat screaming can scare the crap out of humans and other cats alike, which is often (but not always) exactly what the screaming cat intended. If you’ve never heard a cat scream, perhaps you’ve been to a haunted house? You know those spring-loaded, shrieking ghouls that jump out of the walls at the moment you least expect it? Yeah — that’s about what it’s like the first time you hear a cat scream — particularly if it’s your cat who’s screaming.

If you need a reminder that these cute, cuddly creatures we love so much come fully loaded with the instincts and equipment to hunt and kill their prey, just listen to a cat screaming. It’s a gut-wrenching, primal sound, and cats use it to convey a wide variety of emotions.

A cat screaming sounds a lot like a human screaming, except a bit more urgent and desperate — kind of like something out of a horror movie. The sound can rise and fall in intensity like crashing ocean waves, or cat screaming can be sudden and shrill, the equivalent of a human yelling, “Hey! Watch it!”

Here’s a video of cat screaming to demonstrate:

Note: For a cat who is screaming at an outside cat, cover the windows or doors so that your indoor kitty can no longer see the outdoor cat. A (gentle!) towel throw (similar to what’s done at the end of this video) should also help distract and diffuse the situation.

What is cat screaming?

A “scream” is just one of the hundreds of sounds cats can make. In fact, cats are extremely vocal animals, capable of making nearly ten times as many sounds as dogs. But the cat scream is exactly what it sounds like – a sustained, high-pitched vocalization that is often accompanied by growls or yowls. Cat screaming is instantly and utterly distinctive — there’s no mistaking this sound for anything other than what it is.

Cat screaming is fairly uncommon, which is probably why it sounds so shocking. The time of day cat screaming usually happens makes this sound even more alarming. You’re more likely to hear cats screaming while it’s dark out and you’re trying to sleep for the simple reason that cats are crepuscular, meaning they’re most active at dawn and dusk — and that includes fighting outside your bedroom window, of course.

Why do cats scream?

One of the main reasons cats scream is because they’re angry or afraid — hence why cat screaming often happens during cat fights. According to cat behaviorist Jackson Galaxy, “The sympathetic nervous system kicks in with the ‘fight or flight’ reflex; if there’s nowhere to flee, the only option is to fight. A fear-aggressive cat is extremely fearsome in itself; this is a cat that can hurt you, badly. Be very careful!”

Cats don’t only scream out of aggression, though. Cats may also scream when they are ill. Galaxy recommends staying on top of veterinary checkups to catch any health concerns before they become so severe as to warrant one of those cat screams. Aging cats can show signs of confusion or dementia, and they may scream if they get startled or fearful of their surroundings.

Cats may also scream if they’re in distress. Ever accidentally locked your kitty in a closet? She probably wasn’t shy about communicating her displeasure with your unintentional negligence. And if you’ve ever accidentally stepped on your cat’s tail, you’ve also probably been privy to some cat screaming — you may have been so alarmed that you screamed yourself!

Finally, cats might scream while mating or while searching for a mate. Needless to say, screaming cats are not concerned about waking the neighbors.

Which cats are more likely to scream?

As is the case with most behaviors, certain cats are more likely to scream than others. Two major factors are the cat’s temperament and environment — is the cat living in a multi-cat home where he regularly needs to establish his dominance in the social hierarchy? Is he easily over-stimulated or startled? Was he handled roughly as a kitten? All of these aspects of a cat’s home and development can make him more or less likely to scream.

Additionally, unaltered cats who aren’t spayed or neutered are more likely to scream out of aggression or due to hormones. When I first adopted my calico cat, Phoenix, she was in heat, and she wandered around the house screaming at night for several days until I was able to get her spayed.

Galaxy offers this bit of advice: “Intact cat aggression includes both maternal aggression (totally normal behavior in a new mother when defending her kittens), and territorial tomcat aggression. Intact cats, both male and female, tend to be more aggressive as well as highly territorial; and they are also apt to spray urine on any and all convenient surfaces. The solution: spay/neuter, of course!”