Next on The Scoop: Train Your Kitty to Walk with a Cat Harness and Leash
Catster Magazine 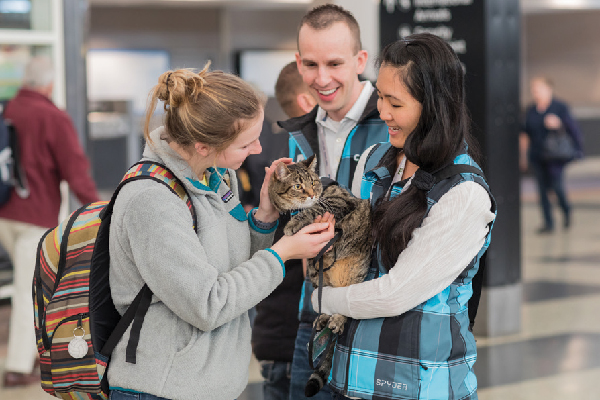 Here’s a little confession: I’m terrified of flying. And I know I’m not alone. If you’re a nervous flier and happen to be flying out of Denver International Airport, keep an eye out for Xeli. She’s a therapy cat who puts travelers at ease by giving their moods a little boost, as well as relieving their tension and anxiety. Xeli is part of the airport’s Canine Airport Therapy Squad (CATS) — made up of more than 100 certified therapy dogs — that is, until Xeli joined as the first feline. She volunteers for two-hour shifts (with her human companion). You’ll recognize her by her blue, plaid Pet Me vest.

Xeli’s pet parents, Liane and Nathan Pensack-Rinehart, adopted her when she was a few months old. She’s super friendly and calm. “Because of her calm and attention-seeking personality, she is a great therapy cat, who loves attention along with being held and pet, regardless of who it is,” Liane says.

Certified through Pet Partners (along with “dad” Nathan), Xeli started her therapy cat career at places like Johnson & Wales University when Pet Partners helped students calm down during finals week. She’s also visited a memory care unit at a local assisted-living facility. But when they found out that Denver Airport’s CATS was looking for an honorary cat to join the team,
Liane and Nathan thought it would be the perfect place to volunteer. Once Liane got certified to be a therapy handler with Xeli, they were ready to go. Liane admits that it’s always a little awkward when they go to the airport.

Because Xeli is so small and doesn’t really walk on a leash, Liane and Nathan have to hold her, and people don’t always notice her or know that Liane and Nathan are there as volunteers. “When we see someone staring, doing a double take or whispering, ‘Look, it’s a cat,’ we invite them to pet her and explain that she is there for them, to provide therapy and kitty cuddles,” Liane says.

They get a lot of mixed reactions — everything from enthusiastic cat lovers to those who say “No thanks” because they’re allergic. And some people are just grateful — especially those missing their cats at home. “Holding and petting Xeli gives them comfort,” Liane says.

When not soothing frazzled fliers, Xeli hangs out with her three dog and two cat siblings. She also enjoys sleeping, lounging and rolling around in fresh catnip. She loves visitors, greeting everyone and trying to find the nearest available lap.