Next on The Scoop: What’s Up, Pudge?
Catster DIY

How to Make a Cat-Friendly Alternative to a Christmas Tree

My Ghost Cat was nearly injured by a falling tree last year, so this year I aimed for a compromise.

To me, nothing says Christmas quite like my cat’s furry little face peeking out from between tree branches and twinkling lights. For years my husband and I never prevented our kitties — Ghost Cat and Specter — from scaling our false tree and swatting at the plastic, unbreakable baubles we selected specifically with them in mind. I always thought Christmas trees are just too tempting to expect a cat to ignore, but after ours fell and almost crushed Ghost Cat last year I knew we needed a tree that was meant to be climbed — and my journey to find a DIY Catmas tree began.

Our safer tree alternative for Christmas 2016. All photos by Heather Marcoux

The day after Ghost Cat’s near-death experience (okay, maybe I’m exaggerating, the tree missed her, but it was still loud and scary) I started planning for a cat-safe Christmas 2016, and boy, did I have some big ideas. I told my husband about my plans for the “cat tree Christmas tree,” a product I planned to launch on Kickstarter. I envisioned a carpeted cat tree shaped like a full-sized Christmas tree, complete with a sisal-wrapped trunk and a base of presents that would double as little cat beds. In my mind colorful, cat-nip filled baubles hung from several branch-like platforms with built-in LED lighting. I saw my cats safely scaling something that would be fun, festive, and — most importantly — safe and sturdy.

I assured my doubtful husband the idea of a cat-safe Christmas tree would definitely be a hit with cat people, and I told him I would build a prototype over the following year. Like usual, I overestimated my construction skills (nonexistent) and underestimated costs (do you know how much carpet remnants go for these days?) and when the holiday season rolled back around the prototype still existed only in my mind.

I spent the final weeks of November seeking a Plan B for a cat-safe tree. A life-size cardboard cutout would be safe, but it flattened my festive feelings. A two-foot tree wouldn’t crush anyone, but it fell short on Christmas spirit. I would have to create a scaled down, easier version of my dream Catmas tree. 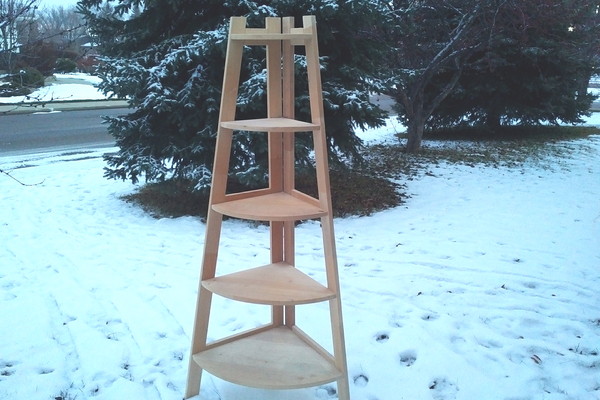 Ikea’s Heri shelf was the perfect base for this project.

What I needed was something sturdy, climbable, tree-shaped and cheap. Enter the Ikea Heri corner shelf, a now-discontinued unpainted wood unit that can be frequently found on classified sites and at garage sales for less than the cost of a string of Christmas lights. (Lots of companies make such items — just search for “corner shelves” and see what appears.) I happened to have one handy, gathering dust in my sunroom. My cats climb it all the time and have never knocked it over, as the corner shape lends wall support.

After a trip to the hardware store I was armed with green spray paint, sisal rope, fake pine garland and a candy-cane rope light to use in place of traditional, less cat-friendly decorations (such as the dreaded tinsel or glass balls). Salvaging the tree topper and strings of lights from our old fake tree, I got to work decorating the Heri for festive feline fun.

I wrapped up a couple of Ghost Cat’s favorite things in the world (Amazon boxes) in Christmas paper and filled them with soft materials, turning them into cat beds for the lower levels. The midsection of the tree became a climbing area, complete with a a kitty step ladder made from an old baby formula can and a paper towel roll. On the highest shelf I hung a red, sparkly cat toy that almost looks like it belongs on a Christmas tree. 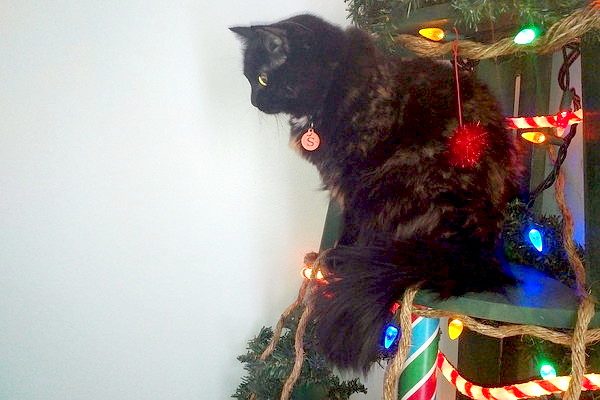 Specter checking out the top level, complete with dangling bobs.

At first, Ghost Cat and Specter were confused by the new tree. In years past they would get excited as soon as I pulled the false one out of storage, and they would start climbing before I even had the thing assembled. Maybe it was lingering aroma of spray paint, but both of the kitties spent a couple hours eyeing the Heri tree before finally climbing onto it. 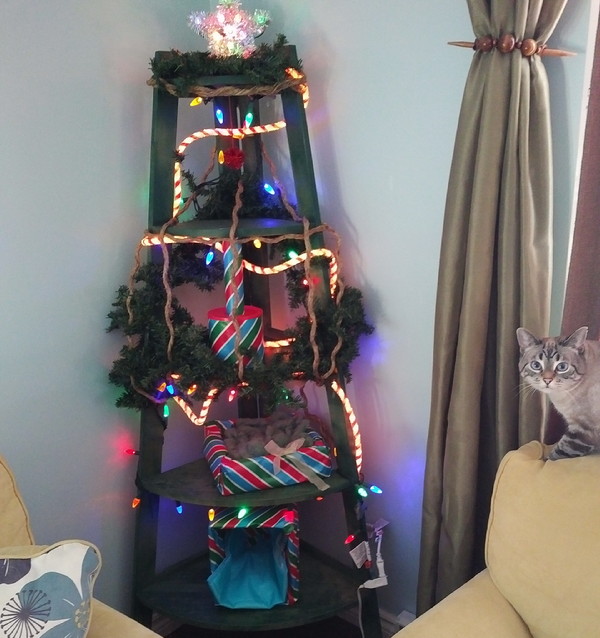 The moment I lit the new tree. Ghost Cat is giving me a look that says “Um, where’s the real tree, Mom?”

Eventually Ghost Cat began enjoying herself, moving from shelf to shelf and jumping from the Heri to the couches and back again. Specter, meanwhile, investigated the cat beds on the lower shelves. The “tree” has been up for weeks with no signs of toppling. It warms my heart to see Ghost Cat and Speck getting into the Christmas spirit without risking a trip to the vet (or worse).

I still think a carpeted version would be better, but unless someone else launches that Kickstarter (or teaches me how to use power tools) I’ll probably use the Heri again next year too.