Next on The Scoop: 6 Tips for a Planning the Perfect Cat-Themed Party for Kids
Let's Talk

Have You Ever Driven Across the Country with Your Cats? I Just Did!

I'm moving from East Coast to West with my feline family. Have you done something crazy like that?

After months of preparation, it was time to make the biggest journey of my life. Not in terms of geography — I’ve been to Europe a few times — but certainly in terms of logistics and life upheaval value: I donated, sold or threw away almost all of my belongings, crammed the rest into my car, and the Paws and Effect Gang and I set off from our old home in Portland, Maine to our new life in Seattle. 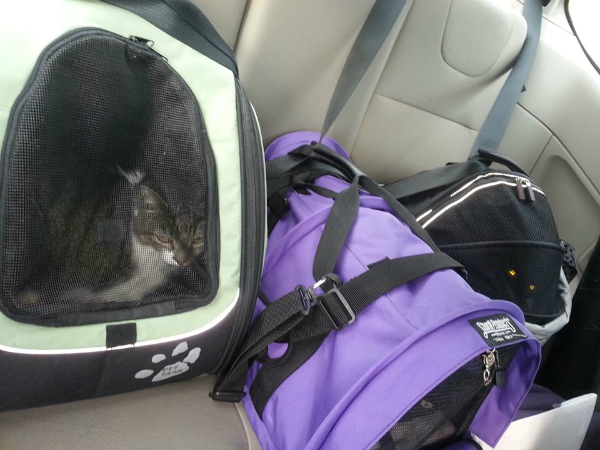 The run-up to departure was stressful for all of us. One by one the cats’ trees and scratching posts disappeared, donated to Bella’s kitty friends at HART of Maine. Then my brother came down and helped me move some of my furniture to its new homes with family members. That same weekend, I went to visit family members and friends to say my farewells, and my awesome cat sitter took care of my poor, stressed kitties while I was away.

We spent our last couple of nights in Portland in a nearly naked apartment, and on the morning of August 28, I squeezed the last of my belongings into my car, put the cats in their carriers, and set off for our new life out west.

As I suspected, there were many cries of dismay when I buckled the cats’ carriers into the back seat. Thomas and Bella quieted down pretty quickly, but Siouxsie sang the blues for the first 20 minutes or so. Once I got on the highway, everybody settled in and went to sleep.

My travel timing was great: I missed the major traffic in Portland and the mad hordes on the way to their jobs in Boston, Worcester, Springfield and Albany. Even getting into Buffalo was a breeze. Once we got to the hotel, the La Quinta just outside of Buffalo, I set up the litter box and opened their carriers. For the record, I stayed at La Quintas pretty much the whole way across the country because almost all of their hotels are pet friendly.

As soon as the cats ate dinner, Thomas found the only hiding place in the room and camped out there. 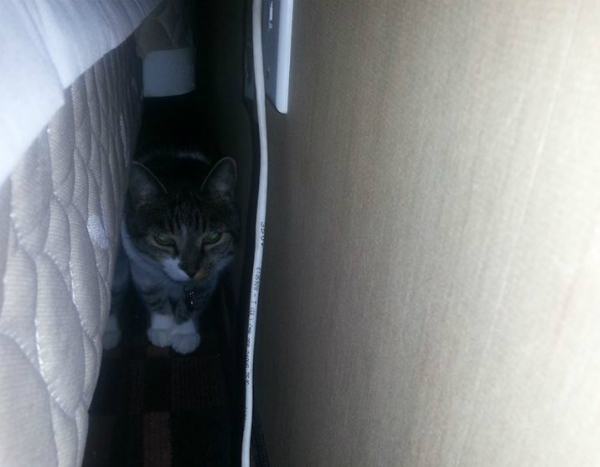 A couple of hours later, he came out and allowed me to pet him. 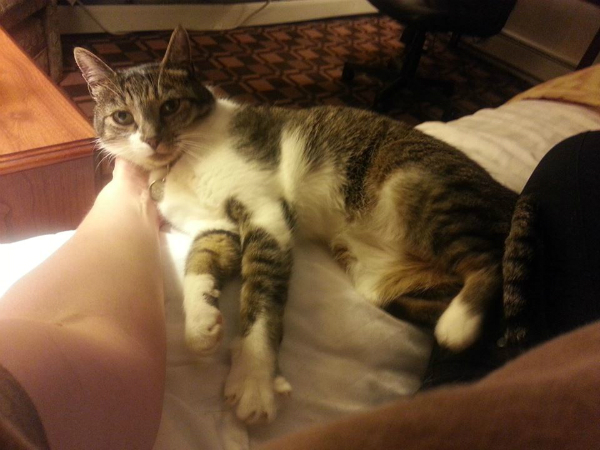 This was my longest and most exhausting day of travel. The driving was a bit of a challenge: On Ohio’s highways, apparently people interpret a safe following distance as an invitation to cut you off and then stand on their brakes. Through this whole leg of the trip, I was grateful to my brother, who holds a commercial driver’s license, for his tip about covering your brake in potentially dangerous situations. Basically, covering your brake means having your foot just above the brake pedal so your reaction speed is faster than it would be if you had to move your foot from the accelerator to the brake: Those few microseconds can make the difference between an annoyance and an accident. Siouxsie was not very impressed with Ohio drivers, either. Every time I got cut off, she howled with frustration. 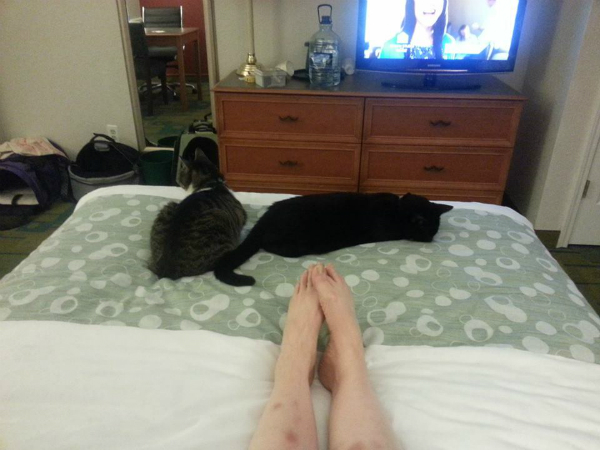 My clever plan to arrive in Chicago after the worst of the evening rush hour was foiled by the fact that I forgot about the time zone changes. Instead of arriving at 6:15, I arrived at 5:15. The highway was pretty much a parking lot. Once again, Siouxsie grumped and griped. "I feel ya, Siouxsie," I said. "I know this is frustrating, but it is what it is." 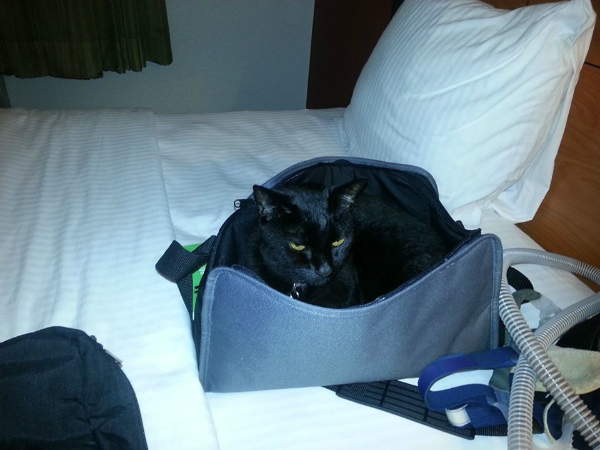 When we finally arrived at the La Quinta in Schaumburg, Illinois, I practically fell out of the car with exhaustion. I piled everybody onto a luggage carrier, and once we got to the room and ate, everybody settled on the bed. The cats were finally getting used to the rhythm of our days. 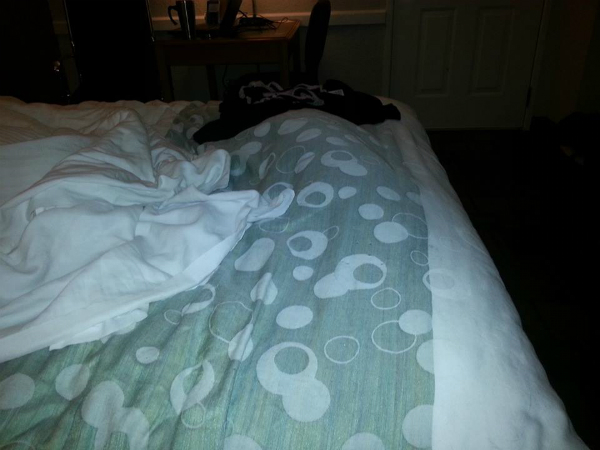 Getting out of Chicago was a lot easier than getting in. Once again, we all settled into the rhythm of the road. Despite the fact that the driving was a lot easier, Siouxsie was a lot noisier. She yowled and cried for the first 45 minutes of the drive, so I stopped to check on her and make sure she hadn’t puked in her carrier or that she wasn’t suffering from some other malady. I realized that the sun was shining right into her carrier and she seemed to be too hot, so I put a cover over part of it so she could get some shade. Nonetheless, every hour or so she had another yowling fit. 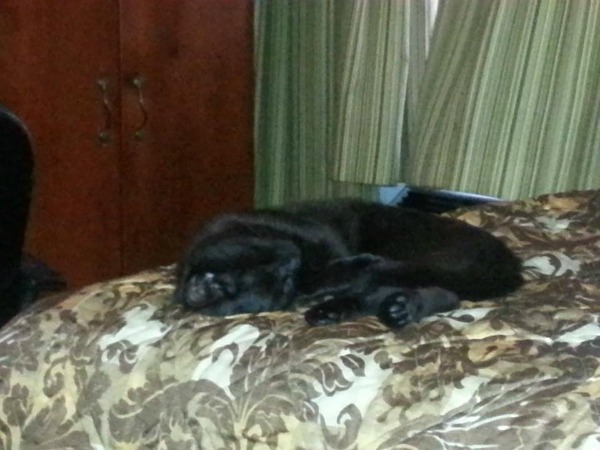 I chalked it up to carsickness and maybe a bit of annoyance at Wisconsin drivers. Unlike their peers in Ohio, Wisconsin drivers seem to believe that everybody should travel the same speed, no matter what lane they’re in. Maybe it’s an East Coast thing, but I think that people in the left lane should be driving faster than the people in the right lane. 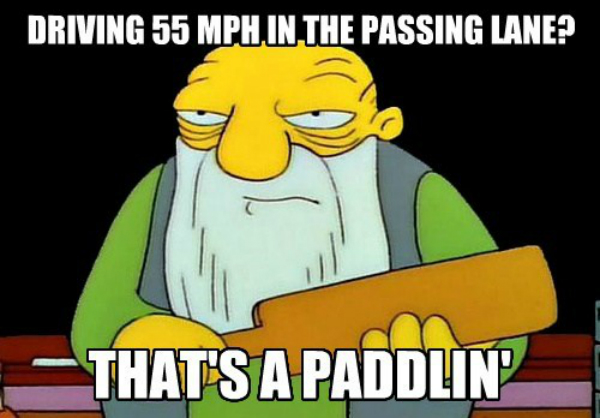 Once again, the cats showed themselves to be expert travelers when we arrived at our hotel. 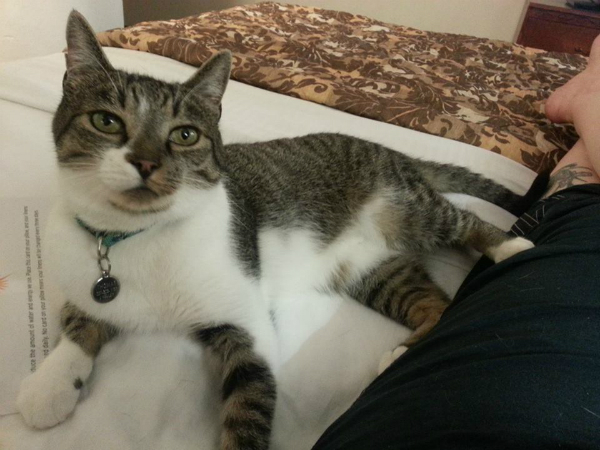 Stay tuned for part two of my cross-country travelogue, in which Bella almost kills herself and I discover the real reason why Siouxsie was doing all that howling!

Have you ever driven for hours and stayed in hotels with your cats? Tell us about it in the comments!