Next on The Scoop: I Made My Own Cat Toys Using Cardboard Tubes and a Box
Ask a Behaviorist

Check your own reactions to irritating cat activities; you might be inadvertently encouraging them.

Most of the time, our little resident kitties are perfect. Well … almost perfect. Although they might not be little angels all the time, for the most part, they don’t get into too much trouble. There are times, though, when they might engage in annoying activities such as keeping everyone awake and persistently seeking attention. These antics usually don’t thrill the resident humans. 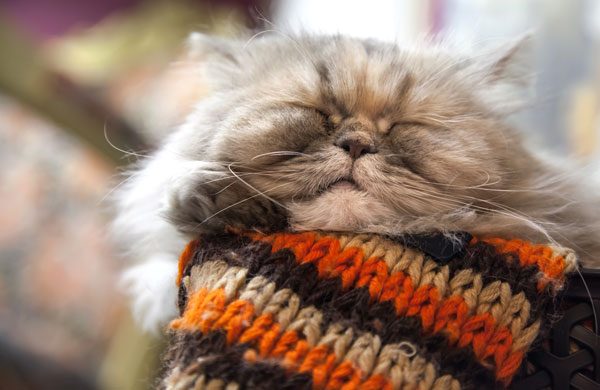 A little angel. Photo by Shutterstock

Behaviors, including annoying ones, don’t happen in a vacuum. Cats always have legitimate reasons for doing them. Common triggers include medical problems, inter-cat relationship issues, poor litter box maintenance and household upheavals, among others. There are also behaviors such as attention seeking, incessant nighttime activities and some destructive behaviors that people unintentionally reinforce. 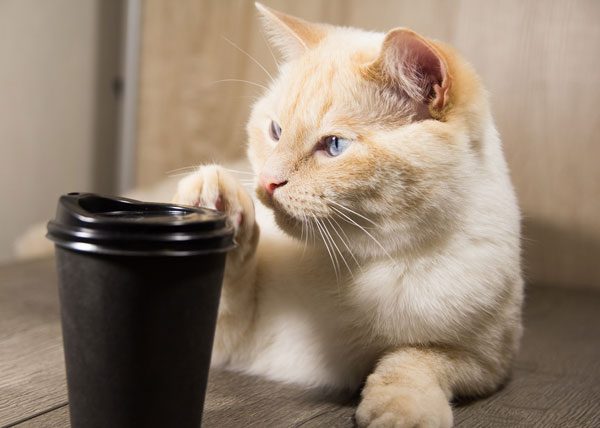 Cat knocking a cup off the table. Photo by Shutterstock

Why behaviors, including irritating ones are repeated

As a general rule, when behaviors work, they’re repeated. It’s not just cats who operate this way — all animals, including people, repeat behaviors when they get the desired results. It’s one of the main ways animals learn, and it helps ensure survival. Behavior doesn’t discriminate — even irritating behaviors are repeated when reinforced. 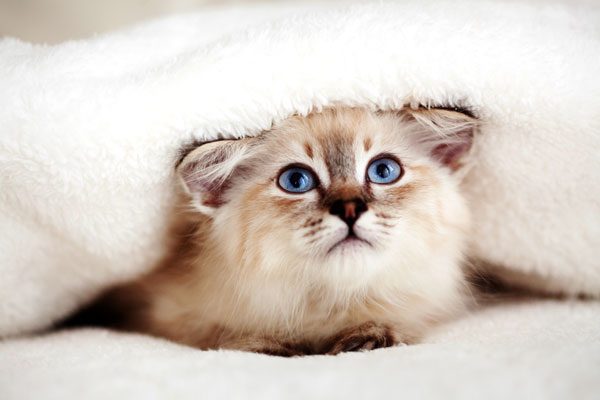 Cats, like all animals, repeat behaviors when they get the desired results.

People will try everything they can think of to stop disruptive behaviors. Instead of stopping them, people sometimes encourage them to persist and reoccur.

Often, cat lovers will pick up, cuddle, feed and play with kitties who keep them up at night. It’s not unusual for people to pay attention to the sleep disturbers by talking to them or loudly communicating displeasure when woken up. The little perpetrators quickly learn that when they act out, their nocturnal activities pay off.

There are different degrees of attention seeking behaviors. Some attention seeking is endearing and easily satisfied with cuddles, play and other low-key activities. Others are over-the-top persistent, with cats doing whatever it takes to get attention. Tenacious attention seekers camp out on keyboards, rattle blinds, climb curtains, knock things off desks and vocalize loudly in addition to other creative and irritating activities. These troublemakers thrive on any attention — some are encouraged to continue their antics through any interaction, blatant and subtle. The behaviors are reinforced by any shred of attention that is directed their way, including yells and whispers, or being picked up, cuddled, or fed. It doesn’t take much to reinforce the attention seeker’s behavior. 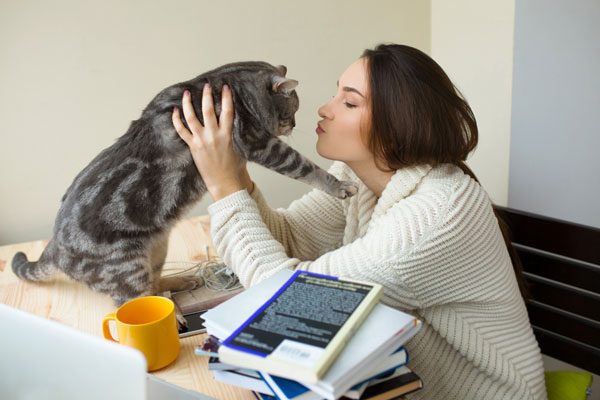 People often cause and reinforce play aggression. It’s not unusual for cats whose humans use their hands during play to solicit play in the future through attacks and biting. These rough players may have began biting and grabbing hands and arms as kittens. Because of how people interacted with them, they naturally assume that’s how they are supposed to play. 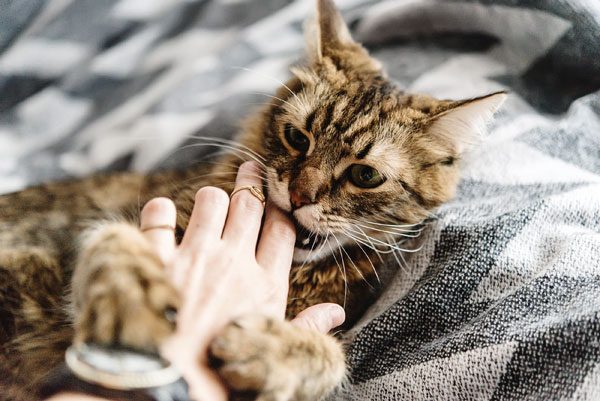 Cat being encouraged to bite. Photo by Shutterstock

How to stop unwanted behaviors

Irksome behaviors can be modified and stopped. Although changing your response is important, the reasons behind the initial activities need to be identified and then addressed.

Kitties who are on a mission to wake everyone at night should be played with and then fed just before going to bed. Timed automatic feeders designed especially for canned food help keep the persistent behavior to a minimum. Time them to dispense food every few hours throughout the night and early morning. Reinforce the cat when she isn’t acting out. Give her what she wants: play, attention and cuddles when she is being a little angel. 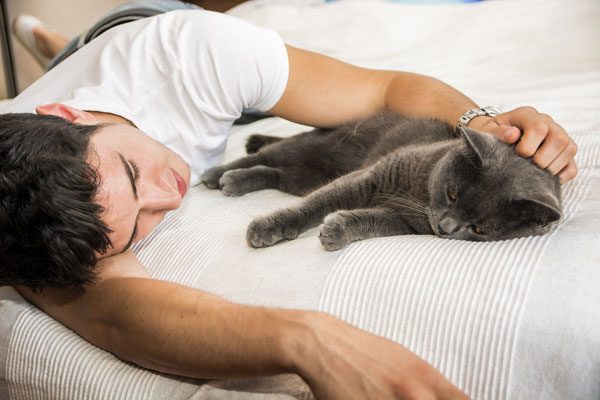 Man reinforcing his cat with cuddles when she is calm. Photo by Shutterstock

Put the spotlight on the attention seeker before she acts out. Play with her in a way that imitates the hunt. Use a pole and drag the toy away from her. After the last catch of the session, immediately feed her a sumptuous meal. She will eat, groom and maybe take a nap. Treasure hunts are also a must. Encourage the troublemaker to work and hunt for her food: hide treats and dry food in toys, paper bags or boxes, or on shelves or cat furniture. Clicker training will also help — it’s mentally stimulating, and it can reinforce cats when they are calm. In addition, enrich your cat’s environment to be more cat-centric and interesting. Supply her with ball-and-track toys, soft toys that can’t be chewed and swallowed, pet water fountains, kitty condos, scratchers, boxes and tunnels. Some attention seekers enjoy the company of other cats — as long as both kitties have a history of getting along with others and they are gradually introduced to each other. 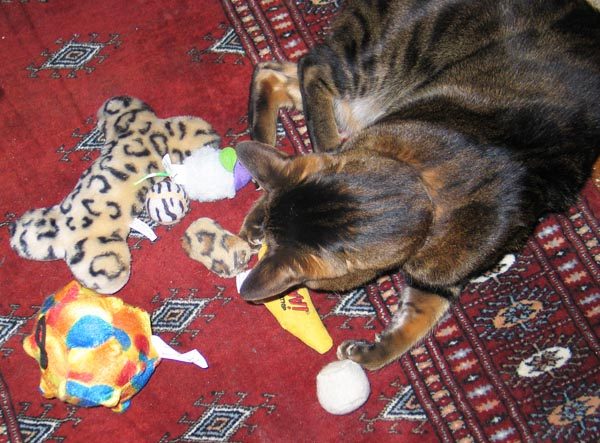 Play biting starts with people. Enticing as it might be, people should never play with cats using their hands. Always use pole type toys or cat-safe toys that can be chased and wrestled. Overstimulated cats and those who bite need timeouts. They’re easy to do and are very short. When the kitty is biting or overstimulated, immediately stop interacting with her. Turn around, leave the room or turn your back to her. Timeouts for play biting are short. One or two seconds may be all that’s needed to send the message. It doesn’t take many time outs — she quickly learns that when she bites, her favorite person disappears. 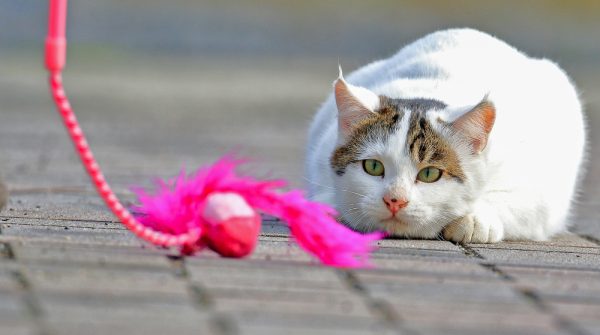 Always use toys to play with cats. Photo by Shutterstock

There are many reasons for unappreciated cat behaviors including medical problems, inter-cat issues, litter box challenges and upheavals in the household.  In addition to identifying and addressing the initial reasons for behaviors, it is important for people to check out their own reactions to the irritating activities — they might be unintentionally reinforcing behaviors.

Do you have a cat behavior question for Marilyn? Ask our behaviorist in the comments below and you might be featured in an upcoming column. If you suspect a behavioral problem, always rule out any possible medical issues that may be causing the behavior by first having your cat examined by a veterinarian.

She is also an award winning author. Her book Naughty No More! focuses on solving cat behavior problems through clicker training and other positive reinforcement methods.  Marilyn is big on education—she feels it is important for cat parents to know the reasons behind their cat’s behaviors.

She is a frequent guest on television and radio, answering cat behavior questions and helping people understand their cats.

3 comments on “Do You Unknowingly Reinforce Unwanted Cat Behaviors?”