Next on The Scoop: Silver Cats May Help Cure Cancer for Humans With Red Hair
Let's Talk

Does the “Cone of Shame” Transform Your Cat?

Rather than being shamed, my Rama gets more loving within the cone. How does your cat act?

You’ve heard of the “cone of shame,” which some of our cats and dogs have to wear after surgery. And some of them do act ashamed when they have to wear the cone. I had one cat who could never get used to the thing and would back away as if ashamed. Other cats, however, change completely, like my Rama.

He recently had surgery for a recurring sarcoma. Every year or so, despite our best efforts and a host of anti-cancer supplements in his diet, this tumor grows and needs to be removed, so Rama has worn the cone many times in his life. I think this may be his fourth or fifth surgery. Strangely, Rama has never acted ashamed when wearing the cone. What’s interesting is that his personality changes.

Normally, Rama is a kind of crabby-sounding cat. He always sounds (and sometimes acts) more irked than he actually is. When the cone comes on, it’s an entirely different story. Here’s what he does:

Rama’s not happy at first, and he lets me know it. He grumbles when the cone goes on and makes his signature crabby noises. Picture a human swearing under their breath, and you’ll get the idea. 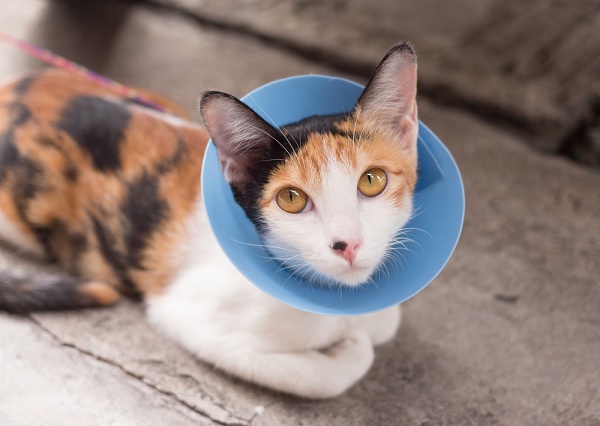 But the crabby period doesn’t last long. Because when Rama realizes that the cone is not coming off, he cleverly reverts to uber-schmoozing. I have to be strict, because Rama won’t waste any time going for his stitches if the cone is off and he’s unsupervised. So he ramps up the pleading in the cutest way possible, and he does all kinds of things that I never see him do otherwise.

2. He gets more loving

It’s not that Rama isn’t normally loving, he just comes at it sideways. He slinks by our legs, barely rubbing against us. He only lets me handle him. But when the cone is on, Rama becomes a different cat. He pursues affection straight on, rather than sidling up to us. 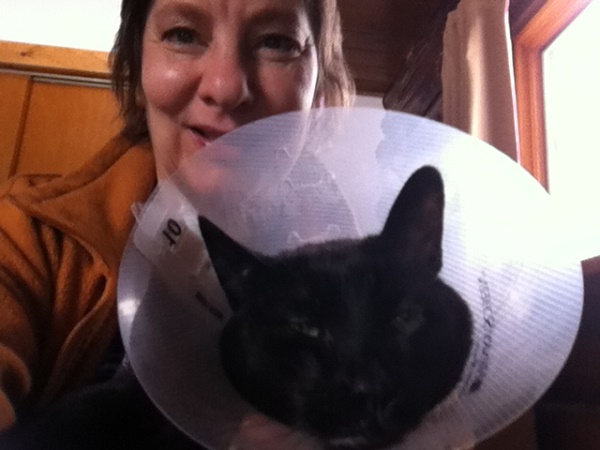 Rama normally crabs about being picked up. With the cone on, he wants to be picked up, even begs for it. It’s unbelievable. He does this not only with me, but with others who he normally would not tolerate much handling from. He’s head butting, nuzzling, and begging for scratches, especially around the neck and head. Many cats are like this normally, but not this guy. In his non-cone life, affection has to be on his terms, with his timing, and usually only with me. That is why, like a well-trained cat guardian, I follow Rama when he gives me the signal that he really wants some love. When he’s wearing the cone, he does this all the time. It’s great!

4. He spends more time in my lap

Again, Rama is not normally much of a lap cat. It’s on his terms, and if he’s seeking out nuzzling, it’s generally on the bed. The cone changes everything. He’s in my lap and wanting to be held. I’ve been cautious this time, as I don’t want to pick him up and damage (or break open) the healing incision. 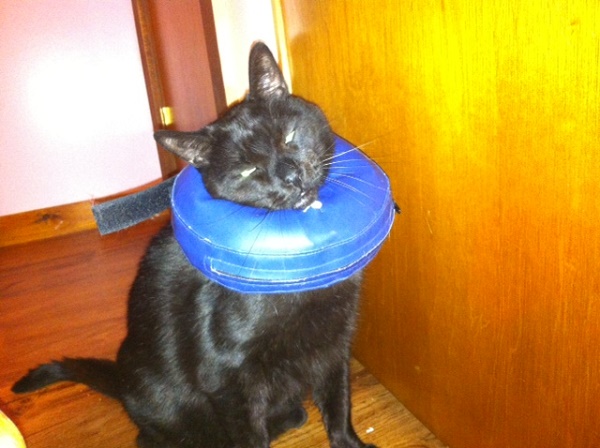 5. He purrs more, and he crabs less

That sounds like a great bumper sticker, doesn’t it? Purr more, crab less. Much as I love Rama’s little crabby sounds (because I suspect that deep down, he’s not really crabbing, just vocalizing in his own way), I LOVE the abundance of purring that happens when he wears the cone. He’s not a cat who purrs all the time, but when the cone goes on, the increase is exponential.

Could this ALL be tied to a deep desire to get that cone off? It’s hard to know.

I had the errant thought that it would be nice if he wore the cone all the time. But of course, I don’t really wish that. I can’t wait for a few more days when the stitches come out and the cone goes off. My vet lent me one of those neat soft neck donuts, which Rama sure seems to prefer, but he quickly learned to slip it. So, the cone it is, until four days from now.

Does your cat have a major personality change when he or she has to wear the cone? Tell me about it!