Next on The Scoop: Heart Disease in Cats — What to Know
Catster Tips 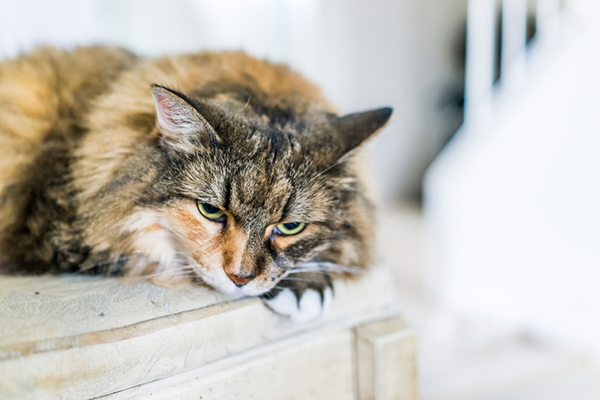 From symptoms to treatments, here’s everything you need to know about feline herpes — and what to do if your cat is diagnosed with feline herpesvirus.

When my mother-in-law decided to adopt another cat, she chose a local cage-free rescue, where she adopted an orange tabby named Goldie. The director handed my mother-in-law a small tube, and said it was “ointment” for the kitten’s eye. The director was pretty vague about the need for the ointment, simply stating Goldie had slight symptoms of an eye infection and the ointment was only a precaution. After getting her home, the eye didn’t clear up, and Goldie started exhibiting signs of an upper respiratory infection — sneezing and runny/watery eyes. My mother-in-law took Goldie to the vet, who gave her some antibiotics. In just a few weeks, the symptoms were back. Many vet visits and tests later, Goldie had a diagnosis — feline herpes.

What to know if your cat has feline herpes

Does your cat have feline herpes? Photography ©Eugene03 | Thinkstock.

Hearing that her cat had feline herpes was cause for recoil, but her vet quickly assured her that it could NOT be spread to humans or even dogs, and it was not the type associated with the sexually transmitted disease in humans. The real bad news was that, by the time of diagnosis, her other cat, Hawkins, had already been exposed to the virus. The only thing to do at that point was move forward with management.

After months of vet visits and antibiotics, Goldie and Hawkins finally stopped showing symptoms of feline herpes. As the vet explained to my mother-in-law, both of her cats were now carriers of the feline herpesvirus, and they might “shed” the virus when stressed. Cats infected with feline herpes might experience occasional flare-ups of their symptoms, especially in stressful situations, such as being introduced to a new pet, moving or a change in their routine. In this case, lowering stress meant more seclusion from the household’s other pets — some rather rambunctious dogs.

What exactly is feline herpes?

Feline herpes, also known as FVR (feline viral rhinopneumonitis) and FHV-1 (feline herpesvirus type 1), is an infectious disease known to affect only cats, domestic and wild. The virus is a major cause of upper respiratory infections, as well as conjunctivitis (swelling of the tissue around the eyes).

Feline herpes can be spread from cat to cat by sharing litter boxes and food/water dishes and mutual grooming. The standard “core” vaccines your cat receives as a kitten and the yearly exam can help protect your cat against the virus. If a vaccinated cat does contract the virus, the symptoms will probably be less severe than a non-vaccinated cat.

What are the symptoms of feline herpes?

When I asked the vet about feline herpes, the person declined to comment, not wanting any “comments to be construed as treatment advice.” The vet was quick to say that, if you suspect your cat or kitten has an upper respiratory infection or eye infection, see your vet immediately for a proper diagnosis.

Let your vet know if your cat has come in contact with any stray cats, was recently adopted or spent time in a vet office with cats who were potentially infected with feline herpes. While antibiotics might be necessary for cats with severe infections of feline herpes, others might respond to treatment with L-lysine, an amino acid that can help prevent the virus from replicating. With her vet’s guidance, my mother-in-law was able to keep her cats in good health by supplementing their premium diet with L-lysine.

Feline herpes sounds scary, but it’s a manageable condition, and surprisingly common. Many people might not even be aware their cats have feline herpes because the kitties display no symptoms. With prompt attention from your vet and some simple management techniques, cats with feline herpes will continue to live happy, healthy lives.

Tell us: What about you? Have you ever had a cat with feline herpes? Tell us about it in the comments below.

About Meghan Lodge: Fits the Aquarius definition to a fault, loves animals, and is always pushing for change. Loves ink, whether it’s in tattoos, books, or writing on that pretty sheet of blank paper. Proud parent of Toby (cat) and Axle (dog). I’m a former quiet nerd who’s turned bubbly animal-obsessed advocate.

117 comments on “Feline Herpes: It Sounds Scary, But It’s Manageable”