Blindness in Cats Comes From an Unexpected Source

It’s summer in the Northern Hemisphere. The water hose in the yard is turned on full blast, your thumb is over the end, pressing down for all it’s worth, and the water’s going everywhere.

It’s impressive for about 30 seconds or so, until your thumb gets tired. Seriously, that water pressure is pretty strong. And it definitely wants to relocate your thumb — sooner rather than later.

What does this have to do with blindness in cats or cat health in general? If you asked my husband-the-physicist, he’d say it was because of the Bernoulli Principle. Me? I just think it’s a quick and easy way to grasp the mechanics behind why some cats go blind.

And why it’s preventable in many cases.

This came up a few weeks ago when a good friend of mine, Kathryn, noticed her 17-year-old cat was a bit unsteady on his feet. Knowing he had a few age-related issues, she scheduled an appointment to have him checked out by their veterinarian.

After discovering some minor arthritis and discussing some of the therapies she might use to help Chase get around a bit more easily, the vet then casually mentioned that Chase was most probably blind.

That completely shocked Kathryn. It also saddened her to think this might have happened without her awareness. She bundled Chase up, took him home and called a mutual friend. This friend, Sharon, is a retired nurse and savvy cat lady. She asked one question:

“For many cats, if it’s caught early, we can treat it and restore a fair amount of sight to the cat,” says veterinary ophthalmologist Dr. Amy Hunkeler.

What does blood pressure have to do with eyesight?

First, let’s talk about how the eye works (in humans as well as cats). There is a layer in the back of your cat’s eye called the retina. It has cells that sense light called photoreceptors. Each photoreceptor is connected to a fiber in the optic nerve. This big bundle of nerves takes what the photoreceptors in the retina “see” and send them up to the brain for translation into an image.

But here’s the thing: The eye needs blood to function. Blood vessels in the back of the eye transport oxygen-rich blood to the retina and optic nerve, nourishing them and keeping them alive.

Let’s go back to the water hose analogy for a minute. Think of those blood vessels as tiny organic hoses, only instead of being filled with water like our yard hoses are, these organic hoses are filled with blood.

Remember how the water insists on trying to relocate your thumb when you hold it over the mouth of the hose? The blood vessels in the back of the eye behind the retina can do exactly the same thing if the blood pressure is high enough. Only instead of relocating your thumb, these organic hoses are relocating the retina.

You might have known or heard about someone who has suffered from a detached retina. When this occurs, you lose vision in that eye. Thankfully, there are procedures to get the retina back in place. And in most cases, eyesight can be restored. How much is restored depends on whether any damage or tearing occurred while the retina was out of place, and how long it was detached before the condition was discovered.

“The reason time is so critical,” explains Hunkeler, “is that when the retina detaches, suddenly tissue on both sides — the retina and the tissue the retina was attached to at the back of the eye — begin to degenerate. The longer the retina stays detached, the more the tissues degenerate. If this goes on long enough, the damage becomes too severe and even if the retina does reattach, we may not be able to restore sight. Catching it early is important.”

My friend made an appointment the next day with Hunkeler. She’s a specialist: an animal ophthalmologist. And she confirmed Kathryn’s friend’s suspicions: Chase did have high blood pressure. Hunkeler immediately put him on medicine to lower it.

“The good news? Treating high blood pressure is pretty easy,” Hunkeler adds. “The pill we use is smaller than a Tic-Tac, and one dose is a quarter of that pill — or basically a few crumbs. Mix it up in a treat or bit of wet food, and the average cat will be very accepting.”

Six weeks later, the retina in Chase’s right eye fully reattached and he has gained back much of the eyesight he lost. The left eye is more problematic, but they hope he will continue to improve. And some eyesight is far better than none.

I also plan to call Sharon-the-nurse and give her a huge thank you.

About Lisa Richman: Writer, director, pilot, foodie, cat person. When she’s not on set, this director of film and video can usually be found taking photos of cats (and food) with her trusty Nikon, or cruising aloft at 3,000 feet. She’s cat mom to an opinionated Tonkinese, a hearing-impaired Siamese, and a feline fashionista. She’s also the owner of a recently launched humor blog, and the Cat Writer’s 2014 Entertainment Blog, A Tonk’s Tail. 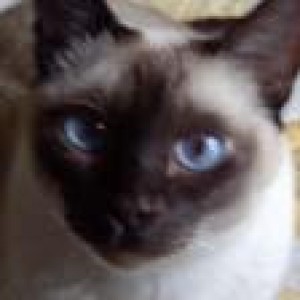