Next on The Scoop: How to Satisfy Cat Hunting Instincts Appropriately
Catster News 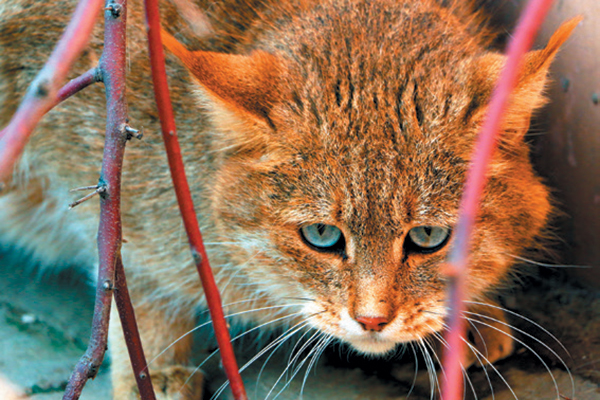 Learn about the little-known Chinese Mountain Cat — aka the Chinese Steppe Cat — and why this cat is listed as “vulnerable” by the IUCN.

Little known to the outside world, the Chinese Mountain Cat is rare even in his homeland, where he is the only native wildcat. At 14 to 20 pounds, this species (Felis bieti) is similar in size to some domestic cats. He is at home in the mountainous provinces of central China — Qinghai, Sichuan and Gansu — where he resides in alpine grasslands, meadows, shrublands and forest edges, roaming to altitudes of 16,000 feet.

Also known as the Chinese Steppe Cat, the little-studied feline has a tawny or grayish-brown coat in summer, which pales to a light yellow-gray in winter. A dark dorsal line is one of his few markings, as well as dark bands and a dark tip on his bushy tail. Like his bobcat and lynx cousins, he has tufted ears.

Voles, mole rats and pikas make up the majority of the Chinese Mountain Cat’s diet, but their abundance may lead to his downfall. Wide-scale poisoning of the rodents by the government kills the cats indirectly. They may also be hunted for their fur. With a population estimated to be fewer than 10,000, the International Union for Conservation of Nature, or IUCN, classifies this rare cat as vulnerable.

Kim Campbell Thornton has been writing about cats and dogs for 31 years. She is the award-winning author of more than two dozen books and hundreds of articles on pet care, health and behavior.