Next on The Scoop: Katrina Kitty Reunited With Family After Five Years 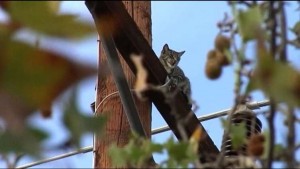 On Monday, residents in a Tucson, Arizona neighborhood witnessed a miracle.

Kim the cat had climbed to the top of a utility pole next to power lines and stayed there for more than two days as her owners and people in the neighborhood watched and hoped for the best.

“We’ve had her for two years, and now she’s stuck up there,” one of Kim’s owners said. “We don’t know what to do.”

Residents called everyone from the power company to the fire department to area TV stations in an attempt to find help for the stranded feline.

“We received a report this weekend that a cat had climbed to the top of one of our power poles,” said a Tucson Electric Power spokesman. “We sent a crew out on Sunday, and determined that the best course of action would be to take no action.

“Oftentimes, cats who climb our power poles will simply come down themselves.”

Then police told the power company that someone had considered climbing the power pole and risking electrocution to rescue the cat.

“When that happened we decided the best thing would be to try and bring the cat down,” the spokesman said.

A Tucson Electric Power crew arrived Monday afternoon and approached Kim in a lift basket. The cat shied away and suddenly dove for the ground as the horrified spectators gasped and screamed. 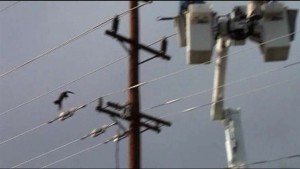 Kim’s owners caught up with her shortly after her death-defying leap. “I actually thought she was going to die,” one of them said. “But she’s fine. She was eating and drinking like nothing happened.”

Although Kim seems to be OK, they are going to take her to the vet for a check-up just to make sure.