Next on The Scoop: Kitty Cardboard: Boxes for Cats to Feel Safe and Protected
Catster Magazine 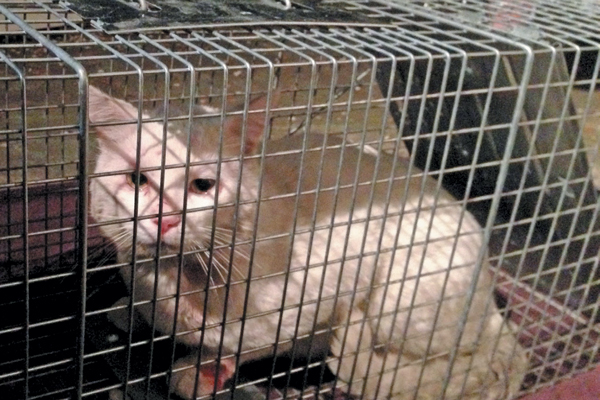 Follow the story of cat journalist, Keith Bowers, who trapped, neutered and returned a wild cat to improve the cat's relationship with the community.

We called him the Bumble. You know, after the Abominable Snowman from the Rudolph the Red-Nosed Reindeer TV special. The Bumble was a great, white, furry, arctic beast who threatened to chew up elves and reindeer, so nicknamed by his nemesis, prospector Yukon Cornelius. My wife, Daphne, and I chose the moniker for our Bumble because he was also a great, white, furry beast who brought trouble.

Except he was a cat. A big cat. Seventeen pounds of scrappy, long-haired feline ferocity seeking female cats for mating and males for combat. This neighborhood bruiser, who acted more stray than feral, repeatedly brought his bad intentions to our backyard, so we sought to end it. We figured that Cornelius eventually disarmed his Bumble by having the beast’s teeth removed, so we’d deactive ours by having his gonads removed.

For us, this was the great unknown — our first attempt at trap-neuter-return — and we had no idea whether we could pull it off. Yet someone needed to help the cats in our Livermore, California, neighborhood by taking the testosterone from this brute. And although we didn’t know it yet, we’d need to save the Bumble from an agonizing demise.

As a cat journalist, I at least knew how TNR worked. I had done interviews and written about Alley Cat Rescue’s Guide to Managing Community Cats, and I’d read or edited many stories on the topic. So while I knew that stopping the Bumble would be easier than managing a feral colony or running a big TNR campaign, I still had many questions.

Where do we get a trap? What kind of trap do we get? Where do we set it? What do we use for bait? Do any local vets perform low-cost neutering for community cats? Should we call a feral rescue group? If we catch the Bumble and get him neutered, how much recovery time will he need? Where should that happen? Where should we release him?

The situation took an urgent turn. One night in our backyard we found a bloodied and injured Bumble, who fled a few seconds after we approached. He’d been in a fight, had taken a couple of pretty nasty cuts to the face and body, and one of his paws was hurt. His attitude had gone from cavalier and cocky to frightened and slow. His life did not seem to be in immediate danger, but we knew he’d now be a much easier target, and that infection and abscesses could appear soon. 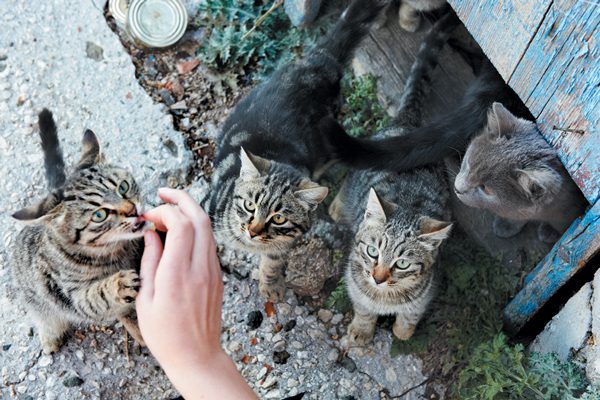 Trap-neuter-return improves the lives of feral cats and their relationship with the community. Photography ©Dovapi | Getty Images.

Operation Stop the Bumble began with advice from a feral rescue group. At a feed store we rented a trap — sized for raccoons — and used a full can of tuna for bait. The group recommended a vet who’d neuter the Bumble and fix his wounds for a reasonable price.

We set the trap in our backyard and hoped for the best. The first morning? Nothing. The second morning? Success! Or so we thought. When I reached the trap, instead of the Bumble I saw Rose, a gorgeous silver tabby who lived nearby. I released her, but before she fled at light speed over the fence, she gave me a look that said, “I am beyond appalled — and you have NO idea what trouble I’m in!”

For several days, our concern grew for the Bumble. We hadn’t seen him since we discovered his injuries. Finally, one morning I again discovered the trap sprung. It was indeed our guy. He was clearly scared but not panicked. He’d probably been through worse, and he was still slowed from his injuries. Daphne and I got him to the vet.

The next day we retrieved him, all clean and stitched up, and high on meds. The vet said to put the trap on our back patio, cover it with a towel, let him spend the night there and release him the next morning. When the time came, we opened the trap and watched the Bumble tentatively emerge. He walked slowly at first, but within a few seconds his gait quickened. He took one look back before he ran for the fence. Whoosh! He was gone.

Daphne and I didn’t see the Bumble again, but a neighbor who fed the community cats did. She reported that his aggression and cocky attitude had vanished, and that he calmly ate and relaxed in her yard with the other neighborhood strays. The local cats were indeed happier, and the Bumble had dodged death.

Looking back, our choice was a little scary but clear. Daphne and I saw a problem that we knew needed a compassionate and determined approach. No one else was willing to step up, so we had to. It was uncomfortable, but we forged ahead and it turned out as we’d hoped. If there’s a moral to this story, it’s, “When you know the right answer, do not hesitate.” Trapping a Bumble and getting him fixed can be daunting, but taking no action is much worse.

Keith Bowers is a career journalist who has covered pets, the arts, law, politics, business and crime. He is a visual artist in oil painting, sculpture and photography and has been the emcee for CatCon for three years. He lives in Corvallis, Oregon, with his wife, Daphne, and one cat, a brown tabby named Thomas.

Read about cat behavior on Catster.com:

3 comments on “Bumble the Cat: Transforming the Neighborhood Nightmare”