Next on The Scoop: 5 Halloween Cat Videos to Get You in a Spooky Mood
Cat Dandy

This will probably sound weird.

My celebrity crush is on a guy who I was once mistaken for, and who numerous people have told me I look like. That guy is Jackson Galaxy, host of My Cat From Hell on Animal Planet and author of the book Cat Daddy.

Why am I telling you this? Amber Carlton recently wrote 5 Reasons Why I Have a Mad Crush on Jackson Galaxy. I agreed with much of what she wrote and wanted to offer my own perspective. Now, my mad crush is a little different than Amber’s. Yet it does present the question, “Is having a crush on a guy with similar looks and sensibilities the same as having a crush on myself?”

The simple answer (the weird answer) is “yes.” 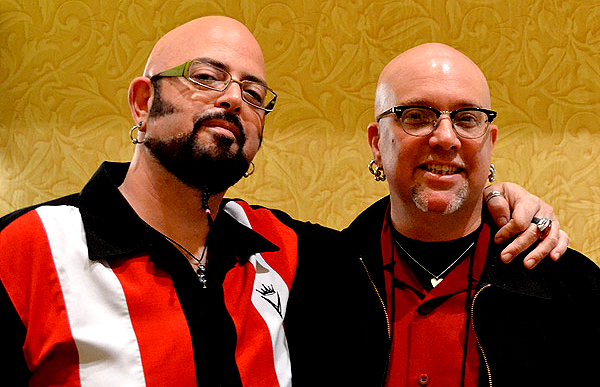 But before you conjure phrases such as “self-involved” or “self-important,” let me explain.

First, the phrase “celebrity crush” isn’t quite as applicable, because I have a little more to go on than others might. I met Jackson Galaxy in November 2012 (at the Cat Writers Association Conference in Los Angeles) and had a pretty long phone conversation with him a few months later. As I wrote in the first round of excerpts from that conversation, talking to him felt like reconnecting with an old friend.

Hmm. Still sounds weird, doesn’t it? OK, read on. I’ll address each of Amber’s five points, and I hope my reasoning will help clarify.

During our phone conversation, I asked Jackson about something that can confound even people with Dalai Lama levels of mindfulness: commenters who start and perpetuate flame wars online. This can be especially fierce among cat-loving people. Jackson admitted his frustration with these folks, but he also looked past the flames and mentioned the good sides of such people — that they obviously care, and that they’re providing homes for cats who’d otherwise be in shelters or dead. Not just anyone can see that. 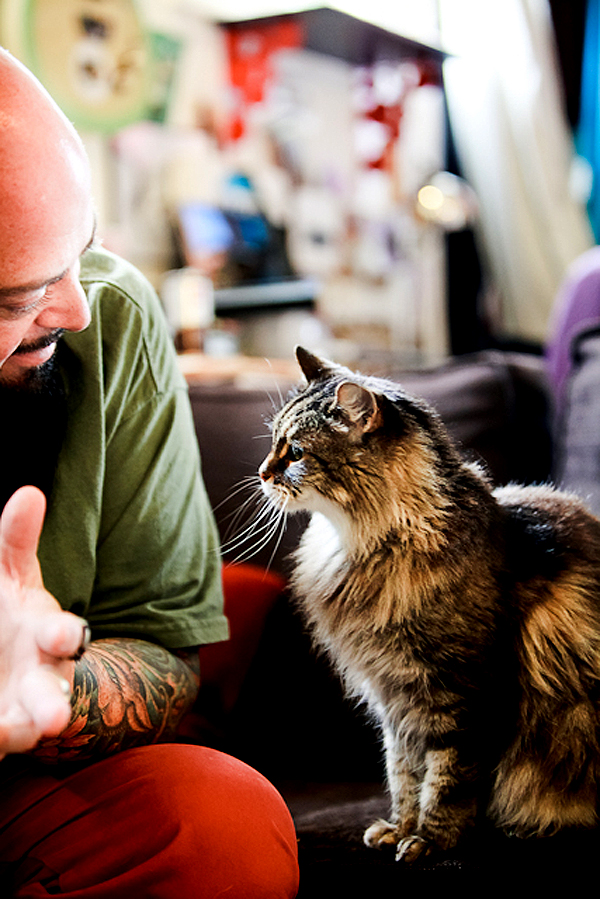 Another example came with regard to a My Cat From Hell episode. Lots of people berated a woman for giving up a cat named Pump she had promised to keep, but Jackson defended her. His reasoning? The cat went to a good, loving home, and everyone was happier — AND THAT’S THE POINT, PEOPLE!

“It’s easy to succumb to the emotions of condemnation; much harder to expand our circle of love and access the bigger picture,” Galaxy wrote on his website.

Clearly, the man has depth.

This shows a silly side behind the seriousness, which is muy attractive. Taking this humorous, nonclinical approach can make it easier for people to understand just how big our role is in the lives of our cats, and how helping them is less overwhelming than it might seem (and that it can be fun). It also applies in the other direction, to cats and their effect on our lives. Some people might not be ready to accept that such a little animal can hold a gigantic link to the mysteries of the universe, but thinking of feline power as “cat mojo” rather than some phrase like “felyne karmic clairsentience” (which was probably made up at a psychic workshop in Sedona), well, it just might open some minds that would have otherwise remained closed.

[Disclaimer: I’ve never been to a psychic workshop in Sedona, but I would go willingly if I had the chance.] 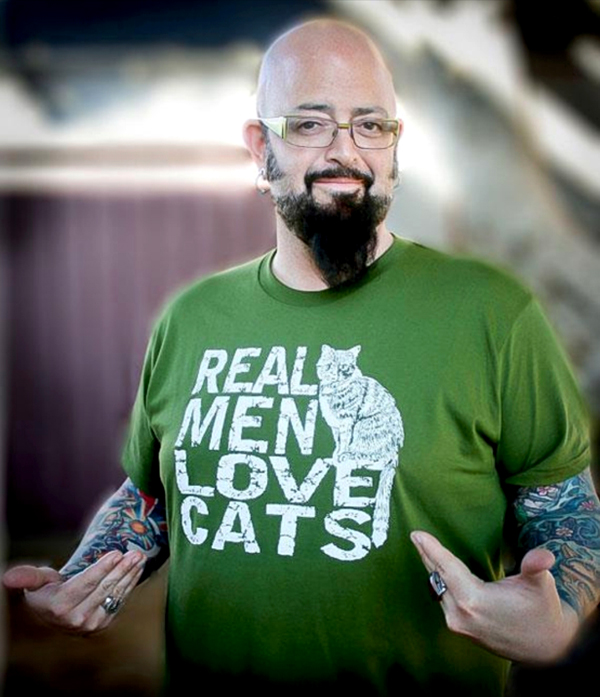 Many people are confused by a bald-headed, butchy, big-shouldered man who not only loves cats but also has a great sense of style, has studied theater, and possesses a sharp wit and strong intellect.

“I’m psyched to confuse you,” he told me in our phone conversation in the spring. “The first time a four-syllable word comes out of my mouth, I love to see that look on your face.”

Some of the hottest relationships in my life have begun with the other person uttering a four-syllable word (or its equivalent), making my eyes go wide and my pulse race like a magnitude-7 earthquake just walked in the room.

4. He loves what he does

Amber, in her post, expresses admiration for Jackson for following the path of a cat behaviorist even though it’s nothing he’d ever set out to do. Rather than resisting and attempting to make reality fit his preconceptions of who or what he should be, he instead kept asking the universe “What do you want of me?” and looking for signs that told him where to go. Turns out they led right to My Cat From Hell, and it’s clear from talking to him that he’s exactly where he needs to be. 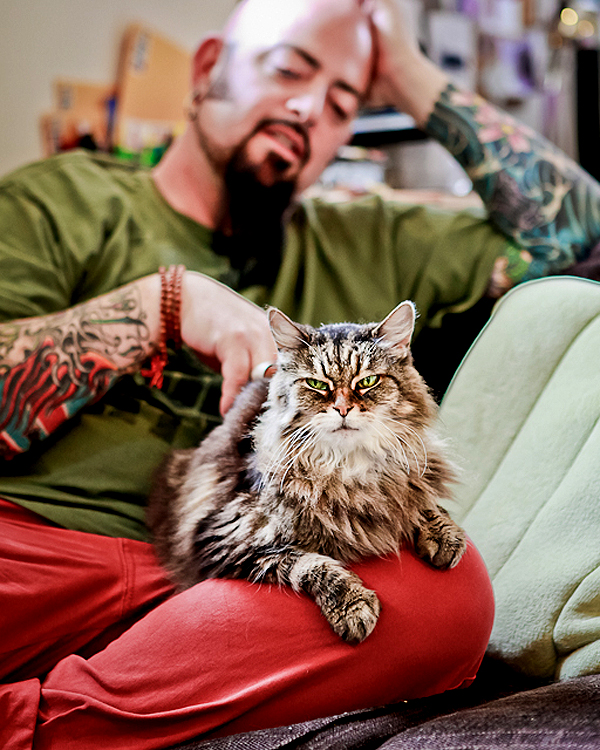 That, my friends, is a model to follow, and one I’ve tried to emulate for several years, since some hard times came my way and led me to re-evaluate the questions of why I’m here, how I should live, and what I should do with my life.

Ah yes. Here we go from the profound and meaningful to the hot and sweaty. Yeah, dude’s hot all right. He has the bald and big-shouldered thing happening, and also a remarkable sense of style, not to mention a level of self-confidence I’ve seen in few people. When Jackson Galaxy walks into a room, he might not make a sound, but you know he’s there. (Rrarr!) It’s another model that many of us would do well to emulate. 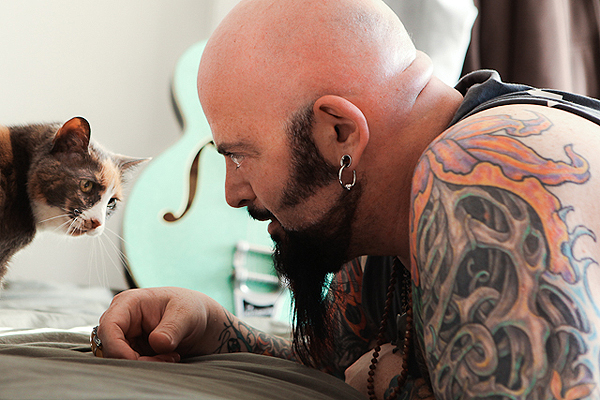 Bottom line: I guess what I’m trying to say overall is that Jackson Galaxy is an inspiration, that I see in him what I could be, what I might be, how I might take all the things I’ve learned and find my own Cat Dandy Mojo to bring to the world — and he has helped me see that it’s part of what I’m doing right now. And that’s attractive. So from that angle, it’s less like crushing on myself and more like crushing on someone who reminds me of myself, and who can also help me be a better version of myself. (Still weird? Yeah? OK. It’ll just have to be weird.) 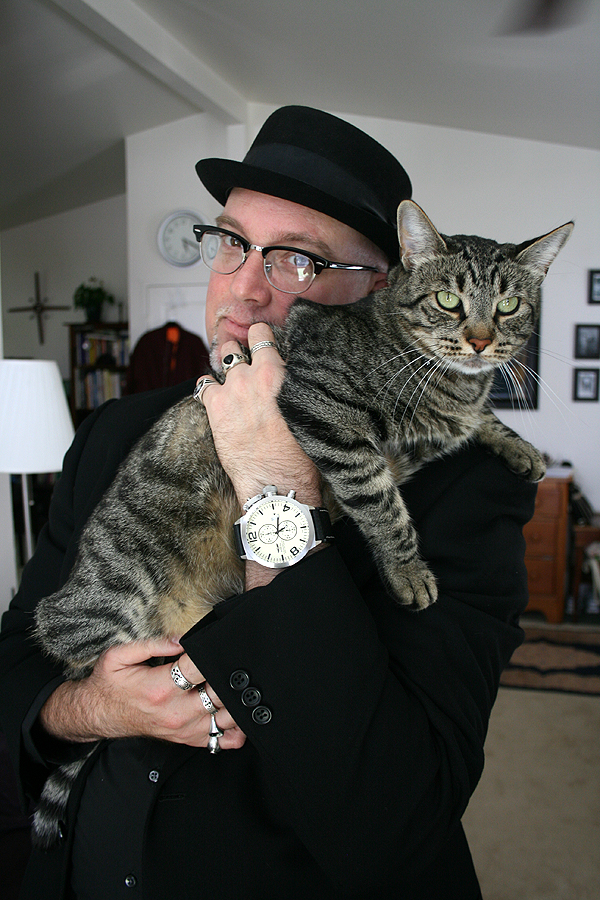 Sentimental afterword: I’m lucky enough to have a significant other who provides me just this kind of inspiration. My girlfriend, Daphne, has long been a model for me of how to meaningfully and mindfully engage with the world, including other people, cats, and all creatures. She encourages me to be whoever and whatever I want, and she loves and embraces the result. I encourage and embrace the same in her — and because I want to be the self-confident, stylish, stereotype-busting cat guy with depth of spirit and strength of character who she needs, I keep striving to be a better man and the best self I can be. 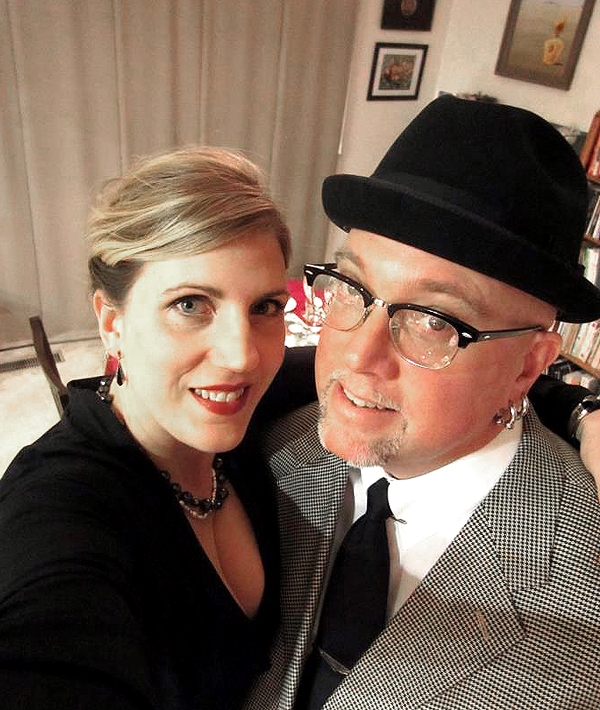 Who’s your celebrity crush? Is it Jackson Galaxy, or someone who inspires you in similar ways? Do you have a doppelganger? Is he a cat guy too?

If Jackson Galaxy is a hottie, it stands to reason that I’m one too: