Next on The Scoop: Stress in the Home Affects Your Cat, But You Can Help
Obsessions

Card Games That Obsess Us: Cats Against the World

It's an expansion pack for Cards Against Humanity, "the party game for horrible people," and proceeds go toward helping cat rescue.

Cats have truly taken over with this fun parody of the popular Cards Against Humanity game (you know, “the party game for horrible people”), This one is an unofficial expansion pack for the original game. It features 36 cards (27 white and nine black).

If you’ve played the original game before, you know that each black card features a question or statement with a blank space. The white cards feature possible answers to fill in the blank. Here’s a fun example: On my tedious journey toward the litter box, I decided to _____ instead. Possible answers: pee on the things you love; do hot laps around the house at 3 a.m.; enjoy the empty cardboard box from stuff my human bought me that I’ll never play with — ever.

The project was created by a small group of designers who were trying to raise funds for the rescue group. One of them, Daniel Mariano, told me that while playing a game of Cards Against Humanity with some of the volunteers at SOXrescue, he and executive director Melanie Juarez were discussing how fun it would be to have cards about cats for the game. And the idea was born. 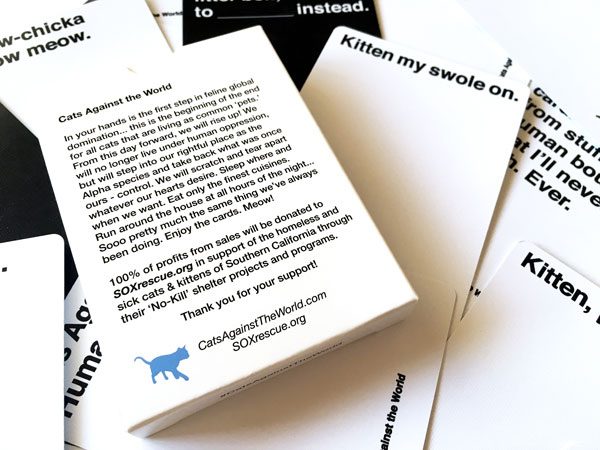 To date, the project has sold and fulfilled more than 8,000 orders and has already helped SOXrescue in moving into its first brick and mortar, along with some needed medical equipment. 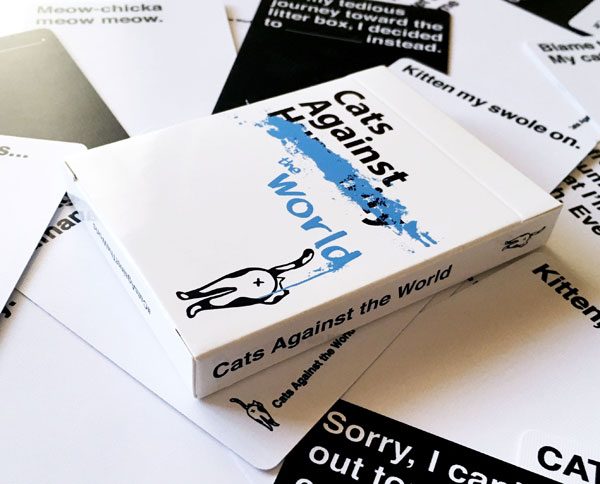 “They key thing out of all of this is that we’re able to save more lives and make an impact in reducing the euthanasia rates in Kern County, California,” Daniel said.

The expansion pack costs $15.99. For more information (and to help support feline global domination) visit the Cats Against the World website or its Facebook page. Also visit SOXrescue on the web.