Next on The Scoop: Luxury Pet Resort Opens on Maryland Shore 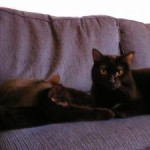 Is it true that you should keep a freshly-neutered male indoors for a week because he can still impregnate a female?

As I have mentioned twice in the last week, I would prefer that all cats were kept inside at all times. However, the answer to your question is yes. After the testicles are removed, it takes several days for all of the residual sperm to clear out of the pipes. During this time, a freshly-neutered male cat can still impregnate females.

It can take more than a week for the male’s testosterone levels to drop. During this time he will remain at increased risk of fighting, spraying, and engaging in other undesirable (from our point of view) behaviors.

What is the most common cause of sudden death in visually healthy young (2-5 years old) cats?

In outdoor cats, vehicular trauma is by far the most common cause of sudden death regardless of age.

But I’m guessing that you aren’t talking about the obvious.

In my experience the most common cause of sudden (and unavoidable) death in young cats is heart disease. Cats are prone to a syndrome called cardiomyopathy. This syndrome develops slowly but initially may not cause clinical symptoms. The first symptom of the syndrome may be sudden death.

Go to my website for more information about cardiomyopathy:

Tomorrow: it’s time to talk about a dog.