Next on The Scoop: 5 Things to Know About Romance and the Modern Cat Man
Behavior

Why Is Your Cat Standing Up on His Hind Legs? 6 Reasons (and Fun Videos!)

Whether you call it cat meerkating or walking like a human, we uncover the reasons (and share some fun videos) why your cat is standing up on his hind legs.

We’ve all caught our cats in the act of standing upright on their hind legs like some peculiar mix between a meerkat and a marionette puppet — but why do our usually regal and poised felines insist on carrying out this curious behavior? Is there any science behind it? And what’s really bubbling in the brain of a cat standing up on his hind legs? Let’s dig in and find out (and watch some fun videos in the process!).

1. A Cat Standing Up on His Hind Legs Wants to Ward Off Predators

As funny as a cat standing up on his hind legs looks, the origin of the move is serious business. When cats feel threatened by a devious predator, they will often attempt to make themselves appear as large as possible. You guessed it: Perching up on the back legs is part of this survival tactic. In extreme cases, you might even see cats shuffling along sideways while in this upright position — which is another attempt to look as large and fearful as possible. Do not mess with a cat standing up on his hind legs.

2. A Cat Might Stand Up Just for a Head Boop

Back in the calm and lazy world of the average domestic cat, popping up on his hind legs can be used to coerce a human to dish out some extra head petting. This move often takes place after some good old fashioned ankle brushing has gone on. In the case of my cat, Mimosa, she hops up on her back legs as soon as she realizes the grooming brush is in play. We’ve taken to calling the move “on her twos.”

3. Your Cat Stands Like a Human to Reach for Treats

A cat standing on his hind legs. Photography by EEI_Tony/Thinkstock.

Another way to get your cat to perfect the two-legged stance is through the tried-and-tested tactic of tempting him with treats. Even the most reserved cats can be coerced into propping themselves up on their back legs when the rustling sound of the treat bag is in play.

Let’s be honest, when cats decide to get up on their hind legs, they totally look like meerkats — although technically meerkats are part of the mongoose family. So, let’s just chalk this similarity up to being another curious kitty quirk.

5. Here’s Why Munchkin Cats Stand Up on Their Back Legs a Lot 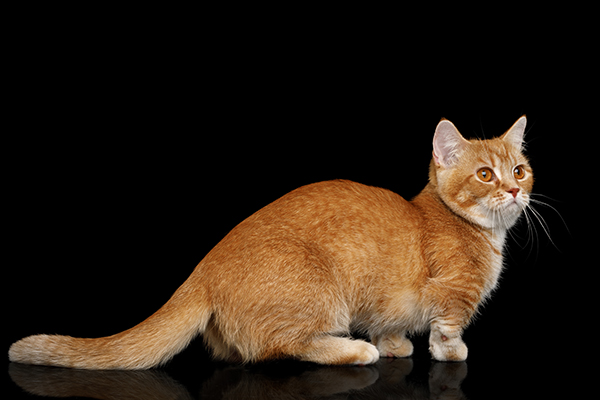 Munchkin cats are born with short, stumpy legs due to some sort of genetic mutation science. As a consequence, these squat kitties can frequently be found standing up on their back legs. It’s all about the low center of gravity, you see.

6. Some Special-Needs Cats Stand Entirely on Their Hind Legs

For some special-needs cats, learning to stand and get about on just their hind legs isn’t just an eye-catching move — it’s a necessity. A couple of these kangaroo cats, as they’ve been dubbed, are stars and advocates on the social media scene. The grandiosely titled Lil Bunny Soux Roux was born without her front legs but has become an Instagram sensation thanks to pictures of her hopping around like some sort of marvelous kangaroo-Tyrannosaurus-rex hybrid.

Roo is another social media celebrikitty who’s all about owning his kangaroo-cat status. He was born with radial hypoplasia, which stopped his front paws from growing and developing properly — but these days he’s more than happy hopping around for his legion of fans alongside his similarly famous kitty sister, Venus the Two-Face Cat.

Cats Lift Us Up During Pandemic

14 comments on “Why Is Your Cat Standing Up on His Hind Legs? 6 Reasons (and Fun Videos!)”