Next on The Scoop: What to Feed a Senior Cat
Behavior 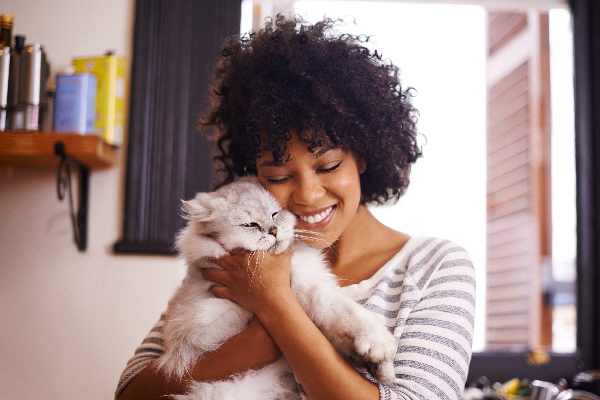 There’s nothing better than cat cuddles! So, why do some cats love to get snuggly while others hate it? How do you cuddle a cat properly?

We’ve all seen cute social media pictures of cats enjoying cuddles with their humans. But why are those cat cuddles so easy to come by with some felines — and why do some kitties seem to strongly avoid any form of cuddling? And how can you go about encouraging your own cat to get cuddly with you?

Let’s dig into the science behind cat cuddles.

How and Why Do Cats Cuddle? What’s up with those cat cuddles — or lack thereof? Photography by vladans/Thinkstock.

When cats cuddle, they are carrying out behaviors they learned as kittens. Back then, snuggling with mom would provide a kitten with warmth and a sense of security. So, when your cat hops up on your lap and curls into a ball while you’re lounging on the couch, or when she decides to cozy next to you while you’re snoozing in bed, she’s cuddling with you to feel safe and warm.

Why Do Some Cats Cuddle More Than Others?

A lot of your cat’s personality and temperament is determined during her early weeks of life — and a cat’s likelihood to cuddle is no different. According to Sally E. Bahner, a feline consultant and pet writer, it’s vital that kittens are socialized at the very young age of two-to-seven-weeks-old. “That means being handled and petted regularly, which will get them used to being cuddled early on,” she says.

Do Some Breeds Enjoy Cat Cuddles More Than Others?

Even accounting for different levels of socialization and a feline’s inherent tendency toward finickiness, certain cat breeds are more likely predisposed to enjoying cat cuddles over others. “I would think that the more sedate breeds such as Ragdolls and Persians would enjoy cuddling more than the active, high-energy breeds like Bengals and Abyssinians,” says Sally.

Older cats who might be suffering from medical ailments like arthritis might also show an aversion to being cuddled, Sally points out. So, if you’re looking to adopt a feline with a preference for cat cuddles, consider the age and breed.

How Should You Give Cat Cuddles?

If your kitty is open to cat cuddles, it’s imperative that she’s always well supported, whether you’ve scooped her up or she’s cradling in your lap. Support kittens and cats like newborn babies, and always avoid squeezing or applying unnecessary pressure while cuddling. Adding some chin scratching to the mix can also help put your cat at ease; in general, petting while cuddling can encourage your kitty to enjoy cat cuddles.

Sally says that one of her own cats, Mollie, doesn’t particularly like being held. When she picks Mollie up, she makes sure she’s well supported and is always released at the first signs of any struggle. “Then I’ll thank her abundantly,” she says, “because it has to be on the cat’s terms; if you force [cuddling], you will make it a negative association.” Similarly, if your feline becomes overstimulated during a bout of cat cuddles and decides to bless you with a cat love bite, that should be taken as a clear signal it’s time to end the snuggle session.

What If Your Kitty Hates Cat Cuddles?

Unfortunately, some felines just do not enjoy cat cuddles. Sally says this is likely the result of a lack of proper socialization, especially not being handled regularly during kittenhood. She also points out that a bad experience — “such as hearing a loud noise while being held” — can spook a kitty out of enjoying cat cuddles.

If Your Cat Hates Cuddles … Does He Hate You?

Sally maintains that just because a cat does not seem to derive pleasure from cuddling, that does not mean that the kitty isn’t affectionate at heart: Even if those full-on cat cuddles are out of the question, your cat still likely experiences a whole lot of comfort and a feeling of safety simply by being close to you.