6 Ways That My Cats’ Body Positions Kill Me With Cute

Cats are cute little buggers — there’s no denying that. If you’re reading this right now and are mentally denying kitty cuteness, I’ll argue with you all day long. Also, why are you reading a site about cats? #confused

Although kitties are adorable every second of the day, certain body positions make them undeniably irresistible. Like I seriously can’t keep my hands and kissy lips off their furry little bodies. Here are the six positions that kill me with cute every single time. I know there are about three dozen more, but you don’t have all day to read this post, so here you go. Prepare to be killed. Ready?

I’m a complete sucker for any kind of kitty leg-dangle. Those little footsies are just asking to be grabbed and (lightly, of course) squeezed. Another of my compulsions is the need to tickle the areas between the paw pads because their toes fan out in a sweet little stretch. I’m a fan. (See what I did there?)

Who can resist seeing an exposed belly just asking for mega rubs! Unfortunately, neither of my cats is too keen on belly-touching time. Does this stop me? Heck no. The payoff of the divine, albeit brief, fuzzy nirvana is well worth it. Phoebe’s belly is especially inviting, and she’s the quickest to reprimand me for going in for some kitty love. It’s like we’re at visitors’ hour at prison: “No touching!”

Although this pose appeals to me in general, Cosmo’s fur makes it downright irresistible! His hair sticks straight up on many parts of his body, making him feel like a baby chick. Visitors often comment on his fur and say it makes it extra fun for petting. Cosmo’s fur! Fun for the whole family!

But let’s get to those haunches. As you can see in the photo, that hair is on the express train to Fuzztown. When Cosmo’s loafed, I must gently rub the palm of my hand across the poofed-out fur. And then, for good measure, I softly squeeze the entire haunch and say, “honk!” It doesn’t have the same effect for me if I don’t say the word. You understand, I’m sure. A double squeeze-n-honk is optimum.

Sometimes this position is unintentional, but other times I think cats believe they’re completely concealed. Surprise, kitty! there’s a foot, tail, ear, or full-on rump visible for all the world to see. After uncontrollably smiling, I can’t help but go after whatever body part is poking out from the “hiding” space. It’s always a bonus if the part is a foot. The touchy-touchy that goes along with that mirrors the leg-dangle protocol. (See No. 1.)

This pose is a rare find, but well worth waiting for. Cosmo has a flabby “jungle pouch” lower belly, so it’s golden when I find it hanging between two objects. This is the just about the only time I’m allowed access to the belly space, probably because he’s not in the most convenient position to swat me. The gut is isolated and featured like a piece of fine art. It must be admired … with my hands.

Cats can tuck and curl themselves into the tightest positions. I’m especially smitten with Phoebe when she turns herself into a “cinnamon roll.” I swear if I were to roll her out, I’d find a thick layer of gooey cinnamon across the length of her belly. I leave her curled up, though, and touch the parts that call to me. The tips of my fingers linger on the side of her muzzle as I smooth her whiskers. I lightly touch her bristly ear fur. And of course my touchy time isn’t complete without kissing the “cinnamon” stripes on her fur. Thankfully, she stays pretty still during all this business (although a cocked ear tells me I’m on a timer).

Which of your cats’ body positions drive you crazy? Tell us in the comments! 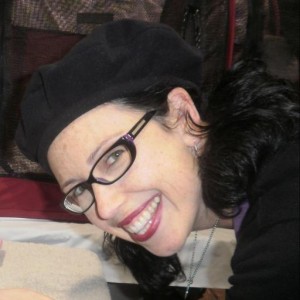 Angie Bailey, an award-winning writer, podcaster, and humorist, is the author of Texts from Mittens and Whiskerslist: The Kitty Classifieds. She’s written cat humor for over a decade, and lives in Minneapolis with her fiancé and two cats — Phoebe, a sassy senior and Janet, a teenage kitty with tons of tortitude.