Next on The Scoop: Nine Stories, Nine Lives, and One Lucky Cat

Should a Sick Kitten Be Vaccinated? 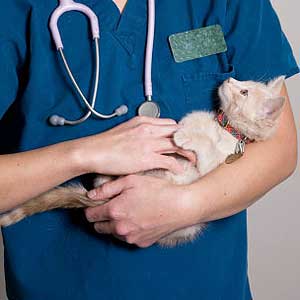 My 4-month-old kitten was a stray. I’ve only had him a bit longer than a month. He has been on a mixture of liquid amoxicillin and doxycycline for almost four weeks, but still has a runny nose and watery eyes. He had one distemper vacc before the symptoms started.

When I questioned my vet about the lack of progress in fighting the symptoms, she said to continue meds for two more weeks and that he could be boostered. Should he really be boostered if he’s sick?

Your kitten sounds like he’s suffering from an upper respiratory infection, or URI. URIs are common in kittens — especially in strays. URIs can be caused by bacteria, viruses, or a combination of the two. I suspect a virus is playing a role in your guy’s situation, since he has experienced an inadequate response to a combination of antibiotics. (Antibiotics treat bacteria but not viruses.)

In general, it’s considered unwise to vaccinate an animal who is not well because vaccines are designed to interact with the immune system; the theory is that the vaccine could distract the immune system from the current task of clearing the URI.

However, there are exceptions, and your kitten may be one of those. The question becomes one of relative risks: The vaccine may delay resolution of the URI, but without the booster your kitten could be at risk of distemper (also known as panleukopenia — one of the absolute, all-time worst diseases of cats).

If your cat were a mature individual who already had completed his kitten vaccine series, this question would be a no-brainer: put off the vaccine until he’s recovered from the URI. However, it actually may make sense to vaccinate your kitten before the URI is completely resolved.

One thing I definitely would recommend is testing your kitten for FIV/feline AIDS and for FeLV/feline leukemia. Infection with one of these might explain why he has been slow to recover from the URI.