Next on The Scoop: How to Introduce a Cat to a Baby and Prepare Your Cat for the Change
Cats and Science 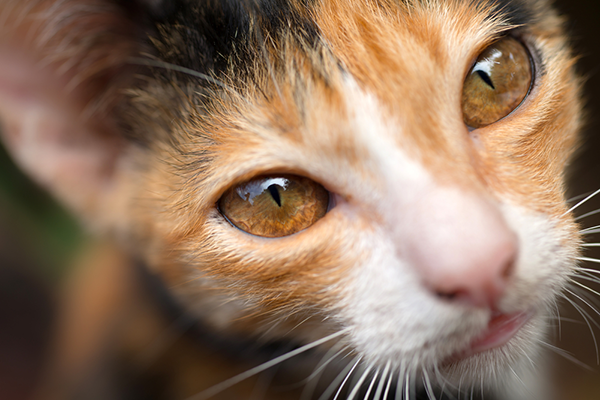 Are cats color-blind? Are they nearsighted or farsighted? Can they see in the dark? Read on and find out some fun facts about cat eyes.

There’s a lot of conflicting information about just how cats see the world around them. Because we can’t see through our cats’ eyes, the only way we can really find the truth is through scientific research. What follows is the most-often agreed-upon understandings of cat eyes. 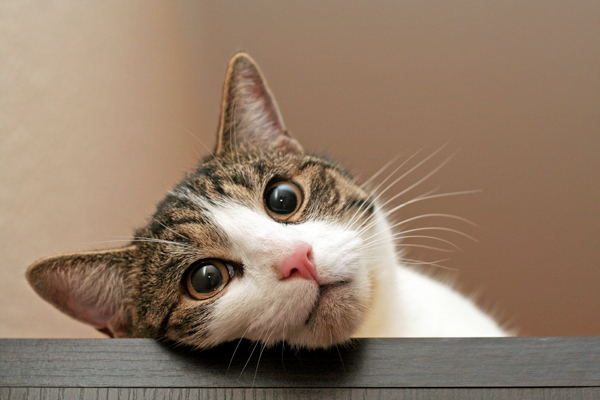 First, let’s start out with a basic eye-anatomy refresher course. Every eye has a lens that allows light into the eye through a gateway called the pupil (the black part at the center of your eye). In the back of the eye is an area called the retina, where the images and light are transmitted to the brain via the optic nerve. Our brain then makes sense of all that light and motion and translates it into what we perceive as vision. The retina has two types of receptors: rods, which detect light, and cones, which detect color.

Our feline friends can see well in just one-sixth the light we require because of two important factors. First, cats have a lot more rods than we do, which means they can detect much more light than we can. Second, cats have a layer of tissue at the back of their eyes called the tapetum lucidum, which reflects light within the eye and allows the cat another chance to “see” it. The tapetum lucidum is also what makes cats’ eyes shine in the dark.

2. Cats aren’t completely color-blind, but their color vision is limited

Cats have a lot fewer cones than humans do, and the ones they do have aren’t concentrated as they are in human eyes. Scientists believe that cats perceive blues and yellows fairly well but they can’t distinguish between reds and greens. Cats generally see color in much less intense hues than we do. 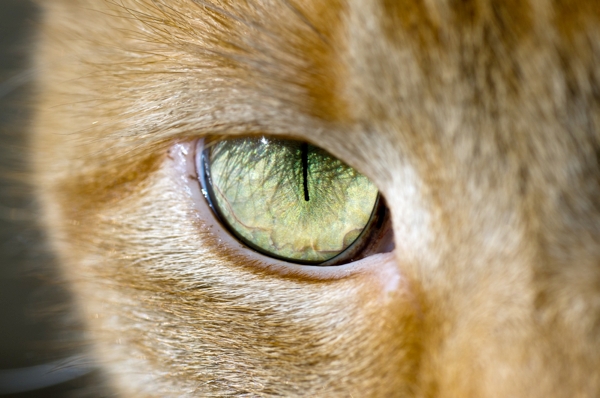 3. Cat eyes see less detail than we do

It’s not that cats are nearsighted — nearsightedness is a vision problem that has to do with defects in the shape of the lens of the eye — but that the balance of rods and cones doesn’t allow for good detail vision. Because cats have more rods and fewer cones than we do, they don’t perceive things like leaves on trees or writing in books in the way that we do. Many researchers do, however, believe cats are farsighted because the cat’s lens doesn’t change shape to compensate for focusing close up, and that they see best at a distance of two or three feet.

Cats and other animals that are active in the day and night have pupils shaped like vertical slits because that shape allows the pupil to change size much faster than the round pupils we humans have. The smaller the pupil, the less light comes in, so our cats are much less likely to get blinded by sudden changes in light levels than we are.

Do you have any other questions about your cat’s eyes? What fascinates you most about cat eyes? Tell us in the comments!

Life Lessons Your Cat Can Teach You