Next on The Scoop: Videos We Love: Cats Who Are Hitching a Ride
Cats in Music

I Bought and Played Music Composed Specifically for Cats; See How Mine Reacted

I videotape the effects of composer David Teie's use of chirping birds and calming purrs.

Remember the Jingle Cats? In what I can only imagine was a painstaking process, thousands of individually recorded meows, yowls, and purrs were assembled into melodies resembling popular Christmas songs. As a child, I thought this idea brilliant — but I still couldn’t handle listening to more than one song at a time.

Neither could my cat, Sweets, who bit me and ran out of the room when I tried to cuddle with him and enjoy the songs of his people — though that might have had more to do with the tiny Santa hat I forced him to wear than the music. 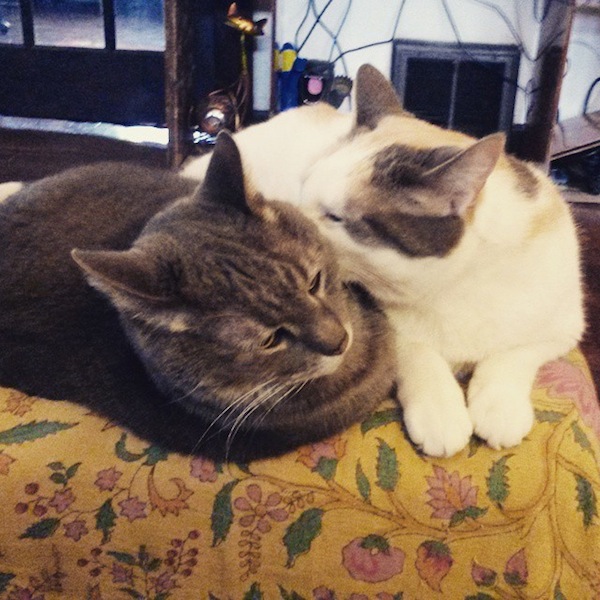 Species-specific music might have triggered a brawl between Bubba Lee Kinsey and Phoenix.

The good news: Modern cat music is nothing like the Jingle Cats. You might have thought your cat was indifferent to your latest playlist, but according to a recent study in Applied Animal Behavior Science, cats don’t dislike music in general — they just don’t care about our music.

“We have developed a theoretical framework that hypothesizes that in order for music to be effective with other species, it must be in the frequency range and with similar tempos to those used in natural communication by each species,” the report says. “Cats showed a significant preference for and interest in species-appropriate music compared with human music.”

Basically, in simpler terms: Unlike food and beds, cats only like music that’s manufactured especially for them. Enter composer David Teie, who has written several feline-friendly songs that are available for purchase on his website, Teyus Music.

“Our music is based on feline vocal communication and environmental sounds that pique the interest of cats,” the website says. “It is written in a musical language that is uniquely designed to appeal to the domestic cat.”

Naturally I had to get my own cats’ opinions on these special songs written just for them. Here’s my 14-year-old gray tabby, Bubba Lee Kinsey, listening to “Spook’s Ditty,” which incorporates bird sounds and is actually quite lovely. But does it live up to the website’s claim that it’s “a little like sonic catnip?”

Hmm, perhaps Bubba Lee Kinsey has grown a bit curmudgeonly in his old age. Perhaps my younger calico girl, Phoenix, will have a different response to “Cozmo’s Air,” an expressive, rhythmic tune “based on the pulses of the purr.”

I could definitely hear the purr underscoring the swaying, fluid melody — and for a second, it looked like Phoenix’s ears perked up. At the very least, I hope the song made her afternoon bath more pleasant.

Or perhaps it made her feisty? Moments after listening to “Cozmo’s Air” for probably the third time, Phoenix picked a fight with Bubba Lee Kinsey.

As usual, no kitties were harmed in the brawl — but I did learn that I’ll probably stick to playing Creedence Clearwater Revival and the White Stripes while I’m cleaning the house and not attempt to cater to my cats’ aural eccentricities.

Have you played species-specific music for your cats? How did they respond — or do they have some other favorite band? Share in the comments!

Learn more about cats and music on Catster:

Posted in Behavior, Offbeat, In the News, Cats and Science, Cats in Music, Humor,