Next on The Scoop: Ask Einstein the Cat: My Folks Took in a Stray and He’s Making Me Itchy
Let's Talk

How Do You Creatively Keep Your Cats Out of Certain Places?

A friend needed to keep her cats out of the bedroom, so she built a special door that lets sound through. Have you faced such a dilemma?

I know a lot of Catster readers like to share the bedroom with their cats, but sometimes a person chooses to keep cats out of the bedroom. Recently, I was traveling and stayed the night in a friend’s home. I hadn’t been in her house for more than a year. Within that year, R had added two new kittens to her household of two other cats and three other humans. Now she has four cats. She is a cat lover, of course.

When I arrived at R’s house and went upstairs with her to put my suitcase in the guest bedroom, I immediately noticed a beautiful door that opened into her own bedroom.

R explained that this door was functional as well as beautiful. R needed a way to keep the cats out of the bedroom at night. When she introduced the two new kittens, some of her cats repeatedly began urinating on the bed. R said that after two peeing incidents, she knew the cats had to be out of the bedroom.

“I was keeping the solid door shut and two things happened. I couldn’t hear Mom and the kids, which was a big concern and netted me sleeping with my phone next to the bed (something I had never done before), and the temperature exchange wasn’t good.”

R tried many ways of dealing with the urinating issues, including the use of Feliway, but claimed that everything worked for a little while and then stopped.

My friend came up with a very creative and beautiful alternative — she installed an additional door (like a screen door, which sound can travel through) on the door jamb, along with her original door. 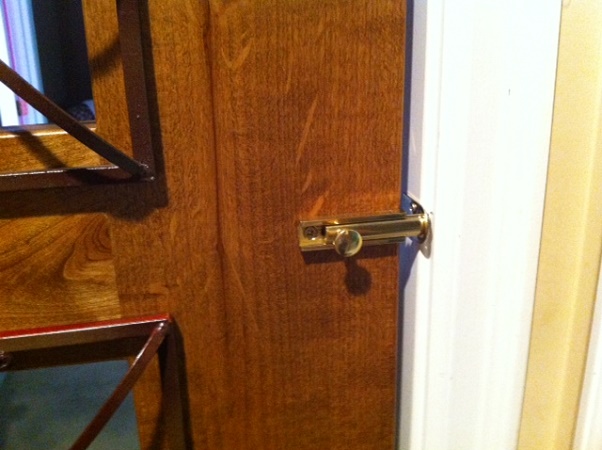 First, however, she thought about a screen door. But her cats climb screens, so it would be torn up in no time, and she wasn’t sure how to make it latch. So she started thinking that a door frame with something heavy duty on it would be awesome. Shopping in the garden section of Menards, R found decorative fillers on sale ($14.95 each) and thought they’d be perfect.

R. bought three and got in touch with a friend who was a carpenter to talk with him about building the door frame. He got the wood, built the frame, stained the wood, and spray-painted the fillers.

Mounted with hinges and latches on both sides, the door cost $239, plus the cost of the decorative fillers. 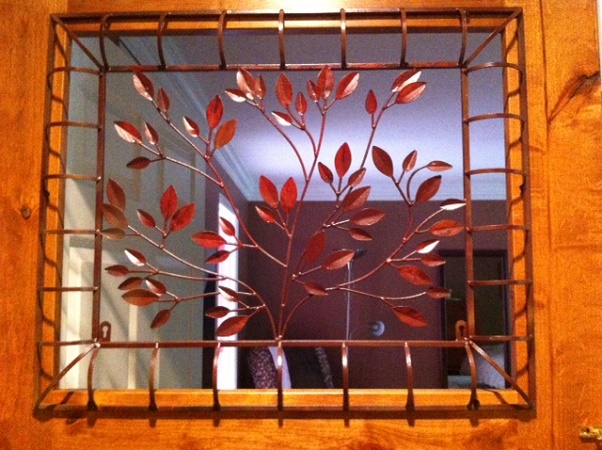 R also added plexiglass to the bottom of the door as an afterthought.

“The plexiglass was an add-on I did because the smallest cat, at six pounds, found she could wiggle through the door and she was bending the leaves. A slightly more ornate filler wouldn’t have this problem, nor would a larger cat.”

R stuck the plexiglass on the back and wired it in place with brown beading wire. You can’t see the plexiglass unless you’re looking closely. At some point, R may put plexiglass to cover just the bottom panel, but that would defeat the airflow purpose somewhat.

R is really happy with her door, and as “un-cat-ladylike as it sounds,” she’s found she prefers sleeping without the kitties. It’s more peaceful for her. 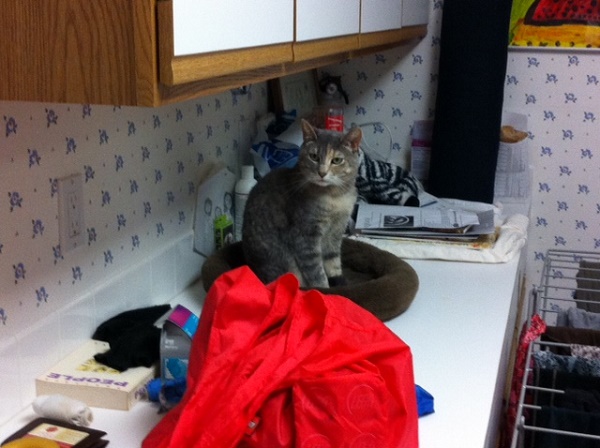 If you need to keep kitties out of a room, but need to preserve airflow or be able to see into the other room for some reason, there are probably even cheaper alternatives. A person could mount a simple screen door and use heavy (pet-duty) mesh, so that cats didn’t tear the screens. Stacked baby gates might also work to close up an entryway while maintaining airflow, visual flow, and sound flow. But R’s door really impressed me. I’m always intrigued with something really creative and beautiful, and this door fit the bill. 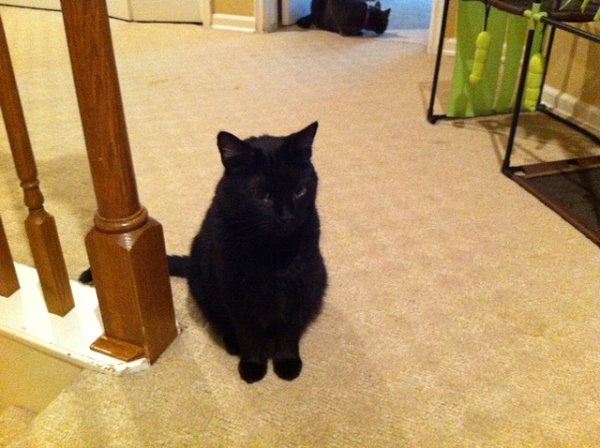 Have you had to keep cats out of the bedroom, but needed to maintain airflow or hear what’s going on in the rest of the house? What did you do? How would you improvise on R’s idea? Do you have any of your own? Share your creative solutions in the comments!