“Sailor Moon” Is Back — So Are Anime Cats Luna and Artemis

I might be dating myself when I say that the foundation of my girlhood consists of denying how much I loved Britney Spears, Sun-In sessions with my girlfriends, and rushing home after school to watch the Japanese anime series Sailor Moon on Toonami. I can’t see you, but I imagine a lot of you are sitting in front of your computers nodding your heads. 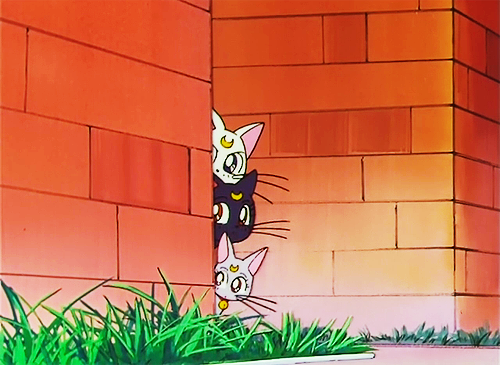 Sailor Moon provided my imagination with sparkly inspiration. Unabashedly girly, Sailor Moon — also known as Serena — could kick some serious cosmic-villain butt, all while wearing the most fantastic outfit. Accompanied by a cast of rainbow-haired allies, Sailor Moon was everything a middle school girl could want: glittering transformations, handsome dark knights, and the trials and tribulations of student life. Chibi Moon was definitely the inspiration for the pink hair I sport now. I was excited to learn that Sailor Moon would be airing on Hulu in its uncut, undubbed original form, promising to remain true to its original story (and yes, some of the narrative’s lesbian romances). Watching the series online, I remembered my fondness for the show’s cats, Luna and Artemis, and realized that without the felines, the universe as we know it may have ended up very different.

Pivotal to Sailor Moon’s self-discovery is a talking cat named Luna. The little black cat with a crescent moon on her forehead is the one who identifies Serena correctly, though it takes a couple of episodes for Serena to grow into her tiara. Luna, and her feline partner Artemis, were advisors to the queen of the Silver Millennium, and when the kingdom was destroyed, Queen Serenity sent the cats to Earth to awaken Sailor Moon and guide her. In the manga, Luna and Artemis are from the planet Mau. In the manga, she appears in her human form more often than the one time she does in the anime.

Alongside Luna is Artemis, who is responsible for awakening Sailor Venus, and he is her guardian throughout the series. While he appears in his human form in the manga, he does not in the anime. Between Luna and Artemis is their daughter, Diana. Diana appeared late in the anime and is Chibi Moon’s advisor. She also has a human form, which is seen in the manga but not the anime.

I got all this information via two different Sailor Moon Wikipedias devoted to Sailor Moon, so major thanks to the fans for compiling such an expansive franchise into an organized manner. There’s this one and this one.

What are your favorite memories of watching Sailor Moon? Are you planning on watching the reboot this summer? (And did you even know there’s a reboot?!)

Read more about cats in comics and TV: