Next on The Scoop: What You Need to Know About Kidney Disease in Cats
Catster Magazine 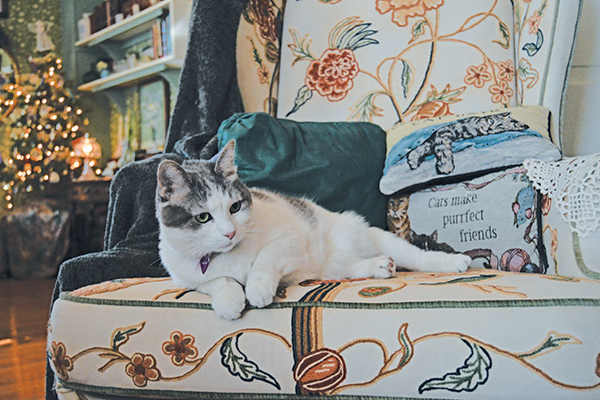 Sandy Kauffman didn't expect feline residents at her bed-and-breakfast, the Highlawn Inn. But when cats kept showing up, she gave them a home.

Sandy Kauffman didn’t go out looking for a staff of feline residents at her bed-and-breakfast in Berkeley Springs, West Virginia. The homeless cats just kept showing up at the doorstep of her Highlawn Inn — and always at the purrfect time.

Every time a cat passes away, another one shows up within two weeks. “It’s just the most amazing thing,” Sandy says. “How do they know?” Sandy, who lives with her husband, Tim Miller, on the third floor, says, “Basically, we’ve never met a cat we didn’t like.”

About the Highlawn Inn

Today, the Highlawn Inn — located in the Eastern Panhandle of West Virginia, famous for its spas and mineral spring water — houses three roaming resident felines who charm the guests and often come to their rooms for visits.

Sandy and Tim didn’t grow up with cats and knew nothing about them, but ever since buying the house 31 years ago, they have had up to five cats at one time living there.

The Highlawn cat dynasty started many years ago, when a black-and-white kitty showed up on Christmas Eve. Once they had that first cat, which they named Jackie, Sandy says they couldn’t imagine ever living without one.

Feline residents at the Highlawn Inn

Blackie is the most gregarious cat, and if you leave your door open, he’ll probably come upstairs and visit your room — and maybe he’ll even stay overnight, if you let him. Blackie also loves hunting and climbing trees outside.

The inn owners’ love for cats extends beyond the living felines at the house. If you step into the garden outside, you’ll find a kitty graveyard, where Sandy has lovingly buried all the cats who have died over the years.

Guests — who often tell Sandy they chose Highlawn Inn because of the cats — will see evidence of the cat love all around the house. Outside, a cat-themed parking sign greets the cats in the driveway. A jar by the entryway collects donations for the local humane society. Cat lovers staying at the Highlawn Inn will also appreciate the new, nearby cat café, Give Purrs a Chance.

Highlawn Inn’s cozy downstairs living area has many cat cushions and ornaments, and just feels like a cozy little kitty retreat. “I think the cats really teach you how to chill out and relax,” Sandy says. “People ask for the cats by name. They obviously have adopted cats as part of the inn family.”

Kellie B. Gormly is a Pittsburgh-based journalist otherwise known at Mother Catresa to homeless kittens and cats. She blogs about her adventures in fostering at mothercatresaschronicle.blogspot.com.