Next on The Scoop: Catster New Year’s Stroll 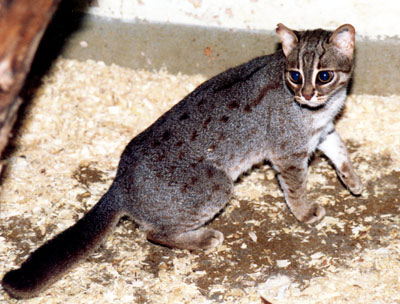 This cat is so rare and endangered, I’d never even heard of it. Here’s an interesting report from the Times of India on the Rusty-Spotted Cat, the smallest of the world’s wild cats:

Bangalore: While there is very often gloomy news of wild animals being poached and their pristine land being encroached, there arerare sightings of some of the most fantastic creatures as well. A team of wildlife enthusiasts spotted a rusty-spotted cat, one of the most endangered species and the world’s smallest cat, at Devrayanadurga reserved forests in Tumkur district, on Friday evening.

The rusty-spotted cat is found only in India and Sri Lanka and measures only 14-17 inches in length. It weighs less than 1.5 kg (females weigh less than 1 kg). Rusty-spotted cats are mostly found in dry deciduous forests as well as scrub, and are arboreal (living on trees). This wild cat mainly hunts small rodents, birds
and lizards.

“This cat is faced with threat of extinction due to habitat loss and the spread of cultivation. There have been occasional reports of rusty-spotted cat skins in trade, or of them being killed for food or as livestock pests. This animal is protected under Schedule I of Wildlife Protection Act, 1972, and is classified under Appendix I of the Convention on International Trade in Endangered Species of Wild Flora and Fauna (CITES), banning trade of this animal to protect it from extinction,” said Sanjay Gubbi, assistant director, Wildlife Conservation Society, India Program. Gubbi was part of the team in Devarayanadurga. He added that the sighting of this rare cat is another reason to protect the 42 sq km reserved forests of Devarayanadurga which is host to other wild animals.