Next on The Scoop: Add These Cat Books to Your Reading List
Catster Magazine 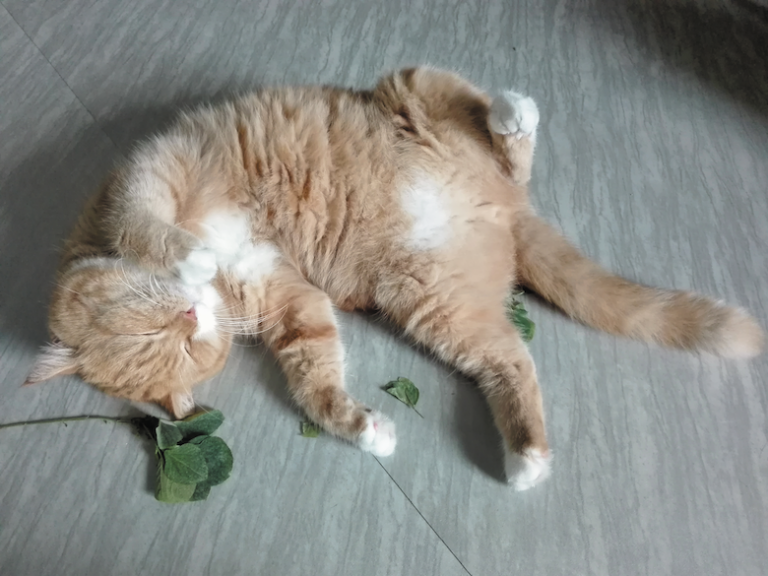 Why this simple plant causes your cat to go woo-hoo, and other plants kitty might have fun with, too?

I’ve smelled catnip. But I didn’t roll around on the floor with my legs straight up, rub my head against the nearest wall or yowl with excitement. So why do the majority of cats respond famously to catnip?

It’s actually in their feline genetics, according to veterinary behaviorist Dr. Amy Pike of the Animal Behavior Wellness Center in Richmond and Fairfax, Virginia. It’s interesting that if you sprinkle catnip in front of a bobcat, as undignified as it may seem for a wild cat, the response could be identical to your kitty on the couch.

So, here’s the 101 on how catnip works. Nepetalactone, one of catnip’s volatile oils, enters the cat’s nasal tissue, where it is believed to bind to protein receptors that stimulate sensory neurons. These cells, in turn, provoke a response in neurons in the olfactory bulb, which project to several brain regions including the amygdala in the midbrain that mediates emotional responses to stimuli and the hypothalamus, the brain’s “master gland” that plays a role in regulating everything from hunger to emotions.

Not all cats respond the same to catnip. Some cats bounce of the walls (literally); others vocalize; some cats eat the catnip; and others may dash around the house.

Dr. Pike adds, “A small percent of cats even respond aggressively. Just like with any chemical or medication affecting the brain, we can see paradoxical reactions, which may be why some respond aggressively.” In any case, she stresses, cats that respond aggressively when exposed to catnip shouldn’t be offered the plant. Dr. Pike adds that up to 20 to 30% don’t respond at all; they’re absolutely unimpressed. Without that genetic catnip coding they couldn’t care less if other cats in the house are experiencing that catnip “high.”

And unlike some human “feel good” choices, catnip is nonaddictive. So far as anyone knows, no cat has ever had to go to catnip rehab.

Dr. Pike says that for cats who do enjoy catnip, it’s definitely true that offering catnip is enriching. Dr. Pike, along with veterinary behaviorist Dr. Kelly Ballantyne, co-authored a chapter on enrichment in the upcoming book authored by members of the American College of Veterinary Behaviorists called Decoding Your Cat.

One option is to surprise your kitties, leaving catnip in unexpected places. Another is to sprinkle catnip inside a toy. It’s not breaking news that cats enjoy hopping inside empty boxes, but what if catnip is sprinkled inside the box? All the better! Catnip applied to scratching posts typically encourages scratching.

Close encounters of the catnip kind can also be a stress-buster. In a 2017 study, 100 cats were exposed to catnip, silver vine, Tatarian honeysuckle and valerian root in their normal living environment. Silver vine and catnip were the plant materials that elicited the most positive responses, with 79% of cats responding to silver vine with enjoyment behaviors and 68% reacting similarly to catnip. Significantly fewer cats responded to Tatarian honeysuckle (53%) or valerian root (47%).

The response to silver vine was also often more intense than to catnip. Why is that? Dr. Pike doesn’t know why — no one does. In part, that’s because catnip responses have been studied more often than silver vine.
What’s interesting regarding this study is that the investigators suggest that when there is no response to catnip, an alternative might be tried with success. Incidentally, valerian root can also have the opposite effect of catnip, which kind of acts like a stimulant. Valerian root can “chill out” anxious cats who are a bit high-strung.

In case you were wondering, both male and female cats responded in equal numbers to the four plant materials in the study.

So how does your cat respond to catnip? And if he doesn’t, have you tried the alternatives I’ve mentioned? If your cat does respond to catnip, cat grass or silver vine, it’s a great opportunity to place it around the house — surprising your cat and making things a little more interesting. Who knows, next time he’s rolling around on the floor or yowling with excitement, maybe you’ll just join in. Now that’s a bonding session.

Read Next: What Does Catnip Do to Cats?

4 comments on “Why Do Cats Go Crazy for Catnip?”