Next on The Scoop: How Many Licks DOES It Take for a Kitten to Finish a Lollipop?
Confessions

My Cat Died in England; Now Her Skull Sits on My Mantelpiece in America

After she died, my cat went into the compost bin -- respectfully. A year and a bit later, I brought a little piece of her home with me.

"I was turning the compost the other day and I found Scooter’s skull," my friend Gillian said. "Do you want to see it?"

That’s probably your cue to stop reading if you’re of a delicate disposition. But if you’re not, and you’re wondering what happens to a dead cat after it’s been in the middle of a pile of garden clippings for about eighteen months, read on. 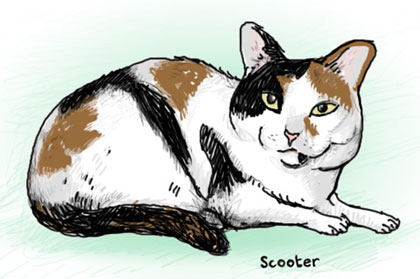 Scooter was a soppy, floppy, mostly white cow cat I adopted from Cats Protection in 1997 in London. She had come from a house where the owner’s mother chased her about with a broom, but she was a sweet-natured kitty.

She never roamed far, but I’d often hear cooing outside and look out to see her rolling on the sidewalk, getting scratches and attention from passersby. She slept under the covers with me and kept my formerly stray alley cat, Korky, in line with the occasional swat.

When I moved to the U.S. in 2000, Scooter went to live with Lew, one of my oldest friends. They had bonded through many visits, and I wasn’t comfortable putting my cat in the cargo hold of a plane. It was a tough decision, but I knew she’d be happy with Lew, and she was. He treated her like royalty, and called me regularly to update me on her activities, like the time she saw off a fox in the back garden or how many moths she’d caught.

The years flew by, and Scooter got creakier. I wasn’t surprised when Lew’s daughter, Gillian, told me Scooter was going downhill. I began to mourn for her rusty little meow and soft fur. I felt regret that I wasn’t there for her at the end, but was consoled by the fact that she’d had a long and happy life. 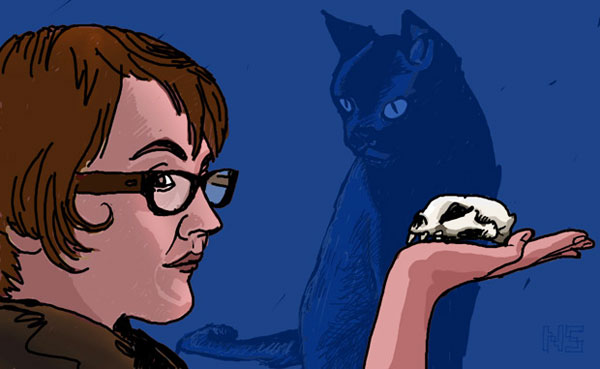 A couple of weeks later, Gillian — who eats organic food, recycles everything, and tries to minimize her carbon footprint — told me that she’d put Scooter’s body, wrapped in a wool sweater, in the compost bin at her allotment, a public gardening space near her home where she grew vegetables and flowers.

Now, I know some people might think this sounds disgusting, but my morbid side was tickled. My kitty was about to become part of the circle of life! It was just happening a little faster than it would if she’d received a regular burial. I made a bunch of jokes about how Scooter was doing her bit for the garden, and whether Gillian could expect a bumper crop next year.

Fast forward a year and a bit to this spring, when Gillian and I were talking over tea in London when she told me about finding Scooter’s skull.

As a little girl, I’d been fascinated by death and whether it meant eternal sleep or just decay. I buried my gerbils in kitchen matchboxes in the rockery and dug them up weeks later to make sure they were really dead. (Alas, they were.) Cats were bugled across the Rainbow Bridge and given full funerals in various backyards. But this felt like something else: a chance to see my cat again, and to bring her home with me at last. 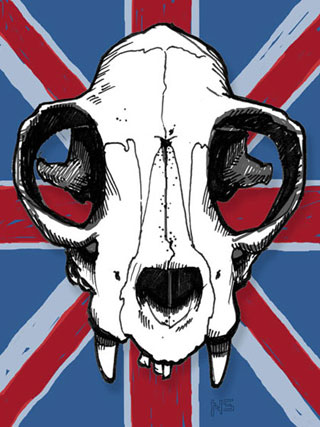 Despite my gorehound tendencies, I still had reservations. What if my cat was recognizable? I’ve seen enough dead cats in my life, and I didn’t want to see anything that looked like a cat mummy. Gillian assured me that the worms and bugs and the fermenting compost had done their work, and Scooter’s skull looked immaculate.

As the end of my trip drew near, Gillian promised to bring it to me. And so it was that on the night before we flew back to San Francisco, she presented me with a plastic tub that had recently contained tom kha gai soup and which now contained my cat’s skull, wrapped in kitchen towels.

I took it gingerly, wondering if I’d get a jolt of psychic resonance or whether I’d be overcome with grief. The tub felt very light.

Gillian stepped back as I opened it and unwrapped the skull. The first thing that struck me was how big the eye sockets were. Scooter had always had an expressive, smiling face, and I felt I could still see that. The skull was light brown and dusted with soil and plant matter, but nothing remained of skin or fur. It was like handling a fragile fossil.

I gently dipped it in a bowl of warm water and set about the oddly intimate task of cleaning my deceased pet’s brain cavity with a travel toothbrush. She was missing a couple of her tiny front teeth, but her fangs were still strongly rooted. Only half of her lower jawbone was present, and I fitted the pieces together, moving the jaw to make her "talk." That made Gillian and I laugh and broke the silence around the slightly uncomfortable sense of ritual.

It took several bowls of water before the skull was clean. Gillian stood well back, fascinated but still squeamish. I held it up and looked into the eyes and tried to imagine what my dead cat might be thinking. Was she mad at me for leaving her? She hadn’t seemed to recognize me when I came back for visits, although she was always affectionate. I didn’t expect a big reunion each time, but I’d hoped she’d bound across the room and into my arms -ÔÇô instead, she’d bonded so well with Lew that she really was his cat now.

I wrapped Scooter’s skull carefully and put it back in the tub, ready to pack in my suitcase. It felt natural to talk to her as I did it, telling her she’d be home soon and that she’d soon get to meet my other cats.

During the flight, I wondered whether I was doing the right thing. Was she enjoying the trip? Was she glad to see me? Even worse, what if her skull got broken in transit? And had I done something that was meaningful to me, but that nobody else would get?

Once we were safely home, I gingerly unpacked my case. The tub and the skull were intact; Scooter had made it to America at last.

Right now, she’s sitting on the mantelpiece on a little red cushion, next to the little boxes that contain the ashes of my cats Frisbee and Hammett. I’m planning to find a proper miniature mausoleum for her soon. Her empty eye sockets don’t scare me or my husband, although I do warn visitors that she’s there. (So far, they’ve all been fascinated by the story.) It comforts me when I look up from the couch time to time and see Scooter, here at home with me again.