Next on The Scoop: Can Cats Eat Chocolate? What to Know About Cats and Chocolate Toxicity
Cat Guys 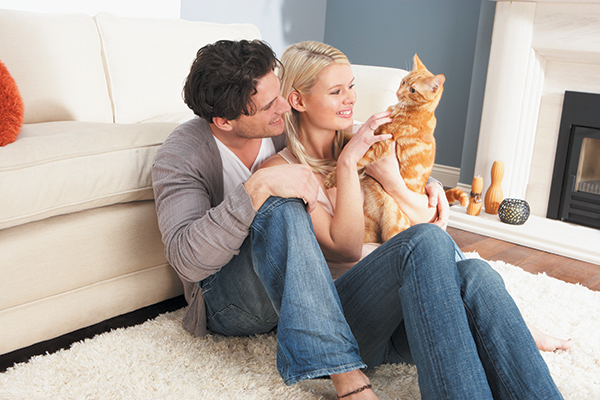 5 Things to Know About Romance and the Modern Cat Man

Why does the modern cat man make such a great romantic partner? We ask one cat man to give us five good reasons.

Some embrace the notion that “real men love dogs” while cats are a female thing. Why? Well, dogs are easier for society to understand as pets, really, and pop culture’s fabricated “ideal man” is strong and rugged yet beyond deep thinking and emotional nuance. Dogs have worked for humans for thousands of years, forming strong bonds. Dogs yearn to be accepted, to be team players. Simple, right? Sure. But cats are complex. Their behavior, by dog standards, seems aloof or even hostile. Cats retain many of their wild instincts. They’re predators as well as prey, so they walk a tightrope, vigilantly scanning their territory for potential threats and opportunities. Even the most experienced cat man will tell you it’s hard to get to know certain cats. It takes a patient, observant and curious man to reach an equilibrium, where the dance between human and feline seems effortless and emotional bonds can flourish.

It also demonstrates why cat guys make great boyfriends: The man who’s committed enough to develop a loving relationship with a cat is more likely to do the same with another person.

1. A skilled cat man knows how to respect a romantic partner’s individuality and space. 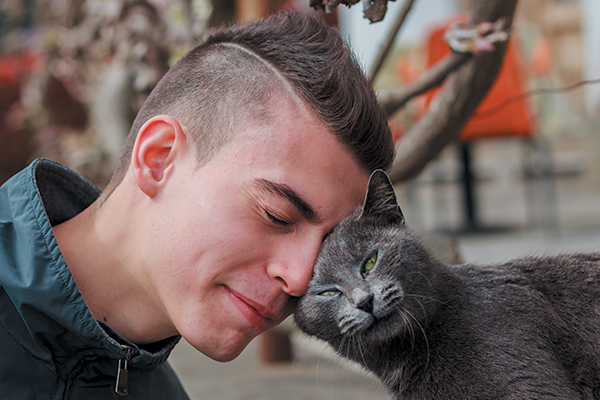 A cat man getting a head rub from a gray cat. Photography ©Matteo Viviani | Thinkstock.

As pets go, living with a cat is more like having a roommate than a dependent. We are cats’ guardians, but they need autonomy. We owe them the latitude to be themselves rather than playthings or auxiliaries. It takes a strong man to understand and embrace this rather than asking “What’s wrong with you?”

My relationship with my cat, Thomas, like those with other friends, is ever changing. Sometimes it’s challenging, but it’s also rewarding, so I stick with it. Over time, Thomas has shown his vulnerability and depends on me in ways I’ve had to earn. I am honored and humbled, and I take the responsibility seriously.

3. A cat guy is more in touch with his feminine side.

Society sees dogs as masculine and cats as feminine. It’s a gross oversimplification, but any boy who grew up loving cats had to face it and how it reflected on him. He probably realized that every animal possesses feminine as well as masculine traits, physically, mentally and emotionally. So he can probably better relate to women and learn to welcome his own female energy without shame or confusion, regardless of his sexual orientation.

Any cat man deals with some level of ridicule, and he has probably come to terms with questions about himself and what he values. If being true to himself is more important than being a “real man,” he’s stronger for it. In life and relationships, this man is not afraid to take chances. He’s more likely to try different things, regardless of what others say. He’s adaptable, and that’s important because relationships grow and change.

5. A cat man has a great sense of humor.

Take my relationship with Thomas: It runs deeper than some I’ve had with friends and lovers. It’s a mystery as big as love itself and as old as the universe. Looking into Thomas’ big green eyes melts boundaries and stops time. He and I silently contemplate each other and wonder what it means to live, love and exist. Then he licks his butt.

Welcome to life with a cat, where grace and beauty are disarmingly supplanted by wild eyes, “airplane ears” and running at full speed toward things no one can see. The cat guy learns to embrace life’s absurdity, recognizing that laughing is just as crucial as deep, quiet interaction. Cat guys understand that cats ask a lot of them, but those who “get” cats have a lot to give.

Keith Bowers is a career journalist who has covered pets, the arts, law, politics, business and crime. He is a visual artist in oil painting, sculpture and photography and has been the emcee at CatCon for three years. He lives in Corvallis, Oregon, with his wife, Daphne, and one cat, a brown tabby named Thomas.

Tell us: Are you romantically involved with a cat man? Shout him out here and tell us what else you love about cat men!