Next on The Scoop: Ask a Vet: Why Do Cats Cough?
Catster Tips

Flea- and Tick-Borne Diseases in Cats: Here Are the Basics

Fleas pose more danger; here's how the insects work and what you can do to protect your cat.

Editor’s note: Have you seen the new Catster print magazine in stores? Or in the waiting area of your vet’s office? This article appeared in our March/April 2017 issue. Click here to subscribe to Catster and get the bimonthly magazine delivered to your home.

There are few creatures on Earth that have affected world history as much as the lowly flea. From the Black Death during the 14th century to the present, fleas have caused much torment. Not only do they make your cat itch, they also can cause significant health problems.

To understand the flea, it’s helpful to know its life cycle. Contrary to popular belief, fleas don’t jump from one cat to another. Once a flea jumps on a cat, it stays there for its entire life. The rest of the life cycle, however, is spent off the cat.

When a female flea jumps on a cat, it bites the skin and begins feeding immediately. Ingestion of blood is required for the flea to reproduce. Within 24 hours, the flea begins laying about 50 eggs per day. As the cat meanders, he acts like a living salt shaker, scattering flea eggs throughout the house, mainly in the areas where he sleeps or rests. Within a week, larvae hatch from the eggs. 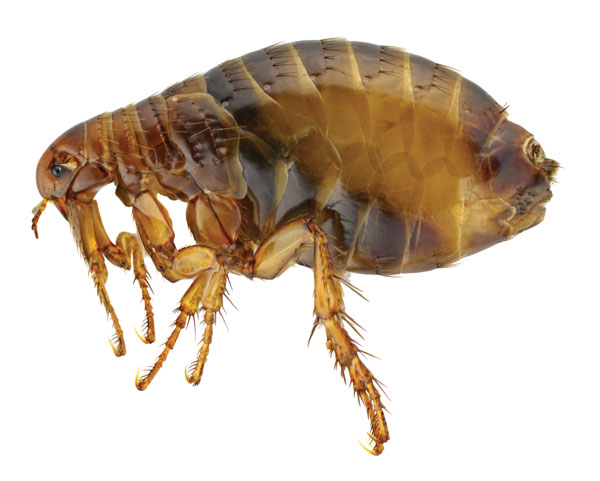 A flea. Photo by Shutterstock

The larvae burrow into carpets and cracks in hardwood floor to avoid light. Five to 12 days later, the larvae spin a cocoon in which they develop into pupae. Baby fleas emerge from the pupae within one to three weeks. These newly hatched fleas wait for a cat to stroll by, and they hop on. The life cycle begins anew.

It’s a myth that cats who spend their entire lives indoors are safe from fleas. Fleas are opportunistic hitchhikers — they jump onto our clothing, and we bring them back home where they hop onto our cats and start their life cycle.

Fleas do more than just cause skin irritation. When fleas bite, they inject a small amount of saliva into the skin. Some cats are allergic to this saliva and will mount an exuberant inflammatory response known as flea allergic dermatitis, which is the most common skin disease in veterinary medicine. Cats with flea allergic dermatitis are uncomfortably itchy.

Fleas ingest blood. While the amount they consume is tiny, if you multiply this by many fleas, and you don’t have a lot of blood to begin with (you’re a kitten, for example), cats can become anemic due to blood loss. I’ve had a few cases where severely infested kittens required a blood transfusion to survive.

Fleas transmit tapeworms to cats. The tapeworm life cycle involves passing through the flea’s body. Cats are fastidious groomers. Occasionally, they swallow a flea when grooming, and if that particular flea is infected with tapeworm eggs, the cat will get tapeworms.

Although tapeworms are relatively benign, heavy infestation can rob cats of nutrients and result in weakness and debilitation. Affected cats need to be treated with an appropriate dewormer and be treated for fleas as well. Fleas transmit
Bartonella, the organism responsible for cat scratch disease, from one cat to another. Although most cats infected with Bartonella show no signs of illness, a few cats can develop clinical illness characterized by fever, lethargy, lymph node enlargement, eye inflammation and other symptoms.

The trouble with ticks

Fleas aren’t the only external parasite that can transmit disease to your cat. Ticks have this notorious ability as well; however, cats are remarkably resistant to most tick-related illnesses. For example, cats rarely get Lyme disease, and other tick-transmitted diseases, such as ehrlichiosis, babesiosis and tularemia (rabbit fever), are also exceptionally rare in cats.

The most likely tick disease for cats is infection with Mycoplasma haemofelis, a red blood cell parasite. Fleas and ticks can become infected with mycoplasma by feeding on an infected animal. They then infect a cat when they bite or attach to it. Mothers can infect their kittens through the placenta. It can also be transmitted from cat to cat via bites. Mycoplasma haemofelis causes anemia that varies from mild to severe. 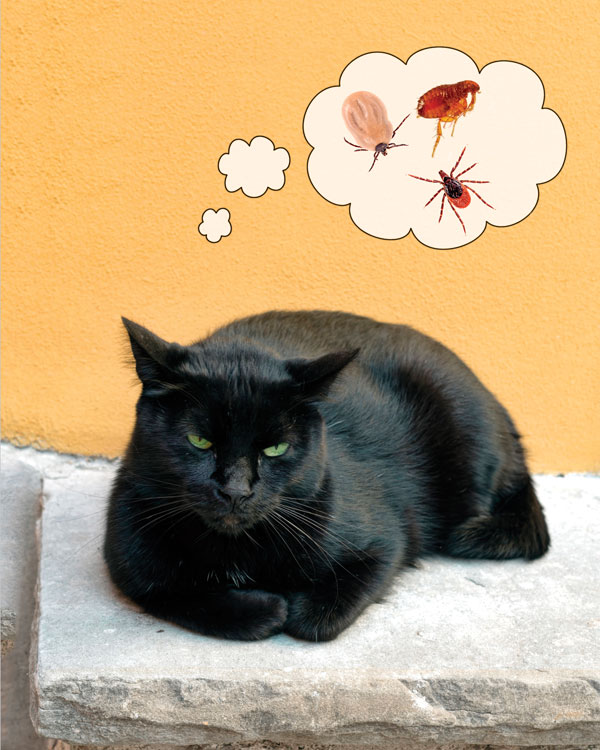 Fortunately, if diagnosed and treated early, most cats recover, although severely affected cats may require a blood transfusion to pull through.

Cytauxzoonosis, also known as bobcat fever, is another tick-transmitted illness in cats. Although rare, it’s a serious illness that’s likely to be fatal unless diagnosed promptly and treated aggressively. The illness is due to the parasite Cytauxzoon felis. Because cats acquire this disease only through the bite of a tick that has fed on a bobcat, the disease is quite rare.

Fortunately, in recent years many new flea and tick control products have been marketed that are exceptionally effective against these parasites. Many of these products are applied to the cat’s skin once a month. Some of these products also treat intestinal parasites and other parasites, such as ear mites. Talk to your veterinarian about which products are most appropriate for you and your cat.

About the author: Dr. Arnold Plotnick is the founder of Manhattan Cat Specialists, a feline-exclusive veterinary practice on Manhattan’s Upper West Side. He is also an author of The Original Cat Fancy Cat Bible. Dr. Plotnick is the former Ask the Veterinarian columnist for CAT FANCY magazine, and is a frequent contributor to feline publications and websites, including his own blog, Cat Man Do. He lives in New York City with his cats, Mittens and Crispy. Follow him on Facebook and Twitter.