Next on The Scoop: 5 Formidable Women Who Defy the Crazy Cat Lady Stereotype

5 Fast Facts About Your Cat’s Claws

Have you ever done a web search for information about your cat’s claws? It’s a frustrating endeavor because you get page after page of results like, “Cats have five claws on their front feet and four on the back, and they’re designed for climbing.” Well, duh! 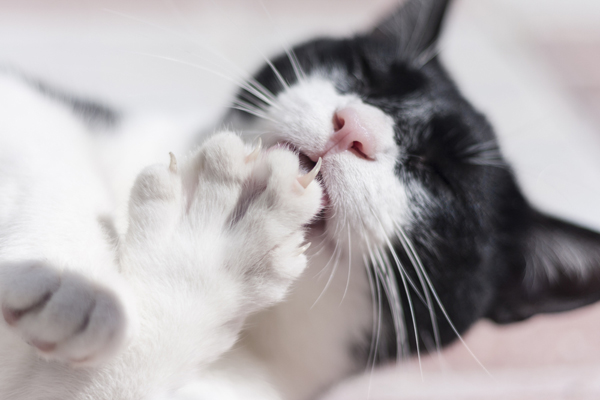 This part of cat anatomy is way more interesting. There’s a lot going on under the skin that makes your cat’s claws the amazing tools they are. Here are five cool facts about them:

1. Your cat walks on his fingertips

Cats are digitigrade walkers, which means that instead of walking on their heels and the balls of their feet like we humans do, they walk on tiptoe. In this photo, I’ve tried to approximate how a cat’s weight is distributed. 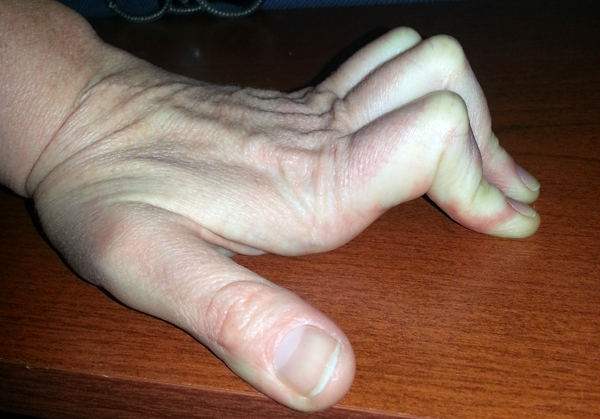 2. Your cat’s foot bones are very much like ours

This very simplified drawing shows how your cat’s claw is connected to his toes and the rest of his leg. The phalanges (singular: phalanx) are equivalent to your fingers, and the metacarpal bone is the same bone that goes from your knuckle to the heel of your hand. 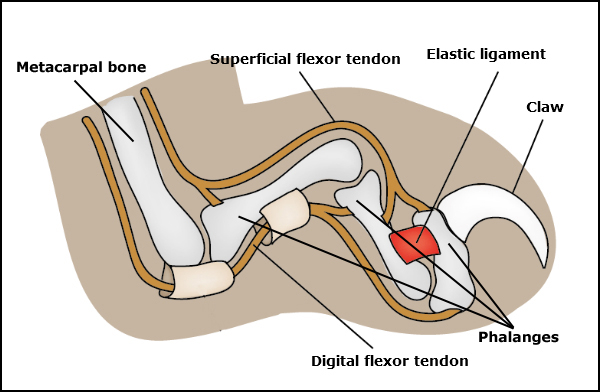 3. Tendons and ligaments control whether his claws are in or out

Ligaments and tendons are made of the same stuff, but they serve different purposes. Ligaments connect from bone to bone, while tendons connect bone to muscle. The elastic ligament, pictured in red in the image above, pulls the distal phalanx close to the middle phalanx in order to keep the claws from touching the ground.

4. Your cat’s claws are made of the same stuff as hair and fingernails

Like all fingernails and hooves, cats’ claws are made of a protein called keratin. Claw tissue grows in layers, thanks to the quick, the living tissue at the core of the claw. The quick contains blood vessels and nerves, which you probably know all too well if you’ve clipped your cat’s nails too short. 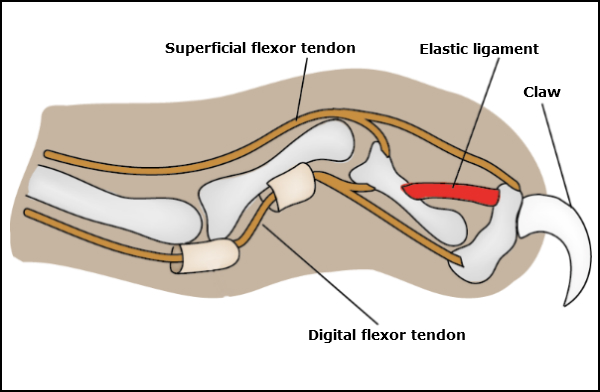 5. Don’t panic if you see claw sheaths on the ground

When you see pieces of your cat’s claws on the floor or embedded in his scratching post, it just means that the outside layer of his claw has grown beyond the blood supply and therefore falls off when he scratches — revealing a nice, sharp new talon underneath! Cats generally shed each claw once every few months.

6. Your cat’s claws grow right out of his phalanges

You might have noticed in the illustrations above that it looks like a cat’s claw grows right out of his distal phalanx. That’s because it does. Unlike our fingernails, which are only connected to flesh, a cat’s claws are connected directly to the bone. What that means is that when a cat is declawed, it’s not just a super-mega nail trim. The entire distal phalanx needs to be amputated in order to keep the claws from growing back again. As you can imagine, this makes declawing very painful, particularly since your cat has to walk on what’s left of his fingers afterwards. 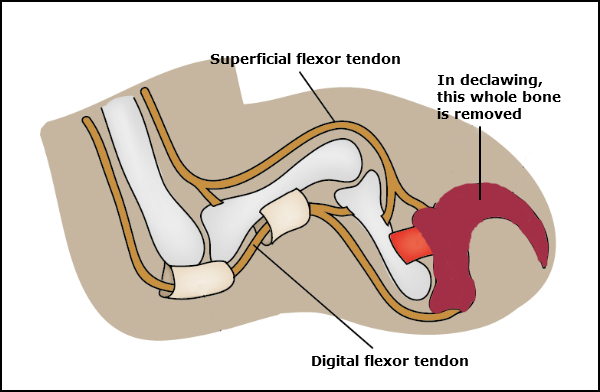 Do you have any other questions or comments about cat claws — or any other cat science-y stuff you’re curious about? Ask me in the comments and I might just answer your question someday!