Next on The Scoop: Marc Jacobs Puts Rue the Black Cat on a Line of Clothing and Accessories

I oppose declawing, and all my cats have their claws, so claw clipping is a job I do my best to keep up on. Living 40 miles from my veterinarian means that I’m not going to rely on taking my cats to the vet just to get their claws clipped. Besides, I have enough other cat-related stuff to spend money on! 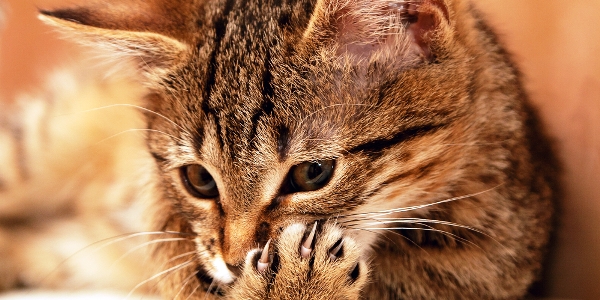 Here’s what I do to make the process go as smoothly as possible:

1. I start them young

Although I’ve had more older cats in this household than kittens, it’s been my experience that kittens don’t seem to have all the “baggage” around claw clipping that some adult cats have. I’m guessing a kitten hasn’t had enough experience with claw clipping to associate it with anything good or bad.

This is why I start claw clipping right away with a kitten. I handle them gently and am careful to make the experience as calm and pain-free as possible. Generally, a kitten wants to play with and bite the claw-clipping instrument (I use human nail clippers). I let them play a little and then we gently to work on the claws. So far, the results have been good and the kittens have grown up to tolerate claw clipping well.

2. Grab them when they are drowsy or have been sleeping

I’d be asking for it if I grabbed my cats in the middle of playfighting, or generally being squirrely, and expected them to hold still for claw clipping. So I go by their schedules.

If a cat is napping or in a laidback mood, I take him gently (so I don’t shock him out of his sleep) and head for the claw clipping room. If things go well, by the time the cat is fully awake, I’m half done with the claws.

3. I shut the door, and do it in the bathroom

Early in my journey with cats, I came to sense that they feel exposed when they’re getting their claws clipped. They seem to carry on a lot more if another cat is nearby. So if you have a multicat household, consider clipping your cat’s claws in a private location.

I take them into the bathroom and shut the door. It does seem to add to the smoothness of the process. When we’re done, I put the cat down gently and allow him to settle down. Some of my cats get a little pent up and would probably take it out on another cat once I release them. I let the cat settle down for a few moments before opening the door and releasing him into the rest of the house.

4. Talk soothingly and tenderly, and pet them

I want them to associate claw clipping with a pleasant — or at least neutral — experience, so I talk to my cats throughout the process in a soothing voice. I pet them, if that’s possible and they’re quiet enough.

My current cats don’t struggle too much, so petting is possible. My black cat, Rama, sounds the grumpiest of the bunch, and a stranger would think, from his noises, that he might lash out and bite me. But Rama’s “bark” has always been worse than his bite, and I know he’s just making a fuss. He’s the kind of cat who sounds crabby even when he’s happy. 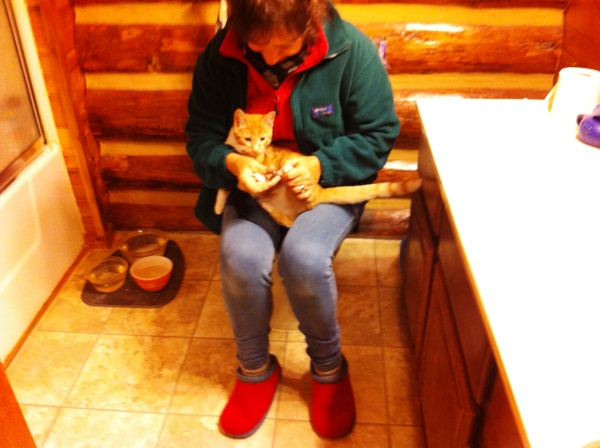 5. I hold them the way they want to be held

Different cats will put up with different ways of being held. If you know your cats well, you’ll be aware of this distinction. Just as some cats will easily let you rub their belly, and some will never tolerate it, some cats will let you turn them on their back for claw clipping and some will have none of it. The pictures show what I mean. Some cats will let me cradle them with their back on my lap — easier for clipping. Others prefer to have their belly facing the ground, which can make clipping a little more difficult. Still, we get it done. 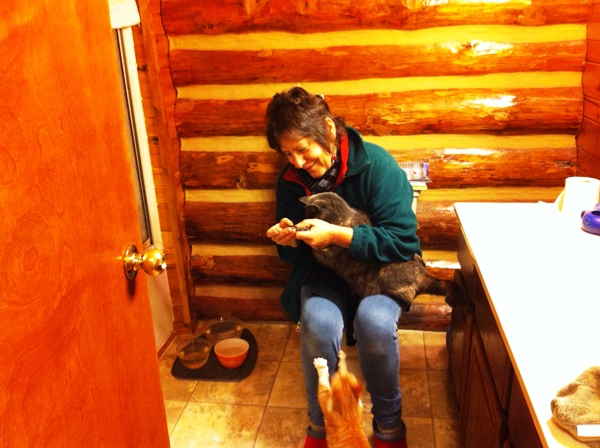 6. When done, I give my cats a chance to settle down

I always give my cats a few minutes to settle down when we’re done. I let them jump off my lap, vocalize their feelings about the business, if they have any, and pace the floor. I stroke them, and talk to them for a few moments. Then, I open the door.

Again, Rama is my barometer. He’s the most sensitive and grouchiest-sounding of the bunch. If I let him out of the bathroom and he doesn’t suddenly chase after someone or try to smack some other cat in the face — I know I’ve waited long enough.

What are your tricks to make claw clipping go smoothly? Share your tips in the comments!