Next on The Scoop: 5 Times That Cats Get in the Way When You’re Wrapping Holiday Gifts
Catster Magazine 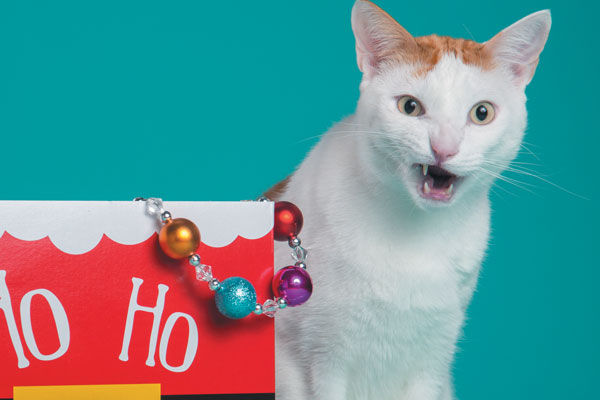 How to Make Sure Your Cat is Comfortable This Holiday Season

Ensure your cats enjoy the holidays by thinking about them in advance and from their perspectives. Let's take a look at some safety tips.

“We have to go back to who cats are and what their origins are,” says Dr. Elizabeth Colleran, a feline specialist and co-chair of the American Association of Feline Practitioners’ Cat Friendly Practices program. “When there’s an unexplained and unexpected change within their territory, it may be a potential threat. And if that change is perceived as a threat, cats will likely take one of two choices: either hide and assess what’s happening, or chase off the intruder.”

Then there are the cats who seem to enjoy it all. Feline-specialist veterinarian Dr. Drew Weigner, incoming president of the nonprofit Winn Feline Foundation, adds, “Some cats do welcome every guest into your home — they’re social and love all the visitors.” Whether your cat isn’t a fan of strangers or welcomes them with open paws, it’s better to be safe than sorry during the holidays with these rules of thumb, er claws.

1. Keep kitty away from the front door

The front door is a way for your cat to try and escape stress so make sure it’s closed. Photography ©karamysh | Getty Images.

With doors constantly opening and closing, what you never want is for an indoor-only cat to bolt out an open door. “Don’t expect your guests to think about how important it is to not let the cats sneak out,” Dr. Colleran adds.

If you’re expecting a lot of company for a large gathering of family and/or friends, sequester the cats into a safe room. (This is true even for social cats until all your company has arrived, when the front door is no longer opening and closing.) Most cats will be more content in a safe room until the party ends. It might help to turn on soothing music or music specifically made to calm cats (there is such a thing).

“It’s also a good idea to plug in a Feliway Classic pheromone diffuser to diminish anxiety,” says Dr. Colleran, who is in Chico, California. “Absolutely, even behind a closed door the cats’ routine is now interrupted, and they can smell and hear all those intruders — so the assumption is that they are still stressed.”

Don’t let guests try and go after your cat who is hiding. Photography ©alexey_ds | Getty Images.

To feel safe, some cats prefer to hide when there’s company. Dr. Weigner notes that everyone, it seems, wants to say hi to a family dog, but people aren’t always as determined to find the cats hiding under a bed. “Never force the cats to meet your company,” he says.

Or worse, allow cat-loving Aunt Matilda, who thinks of herself as a “cat whisperer,” to crawl under the bed to “soothe” the fearful cats. Aunt Matilda will only further terrify them. Also, if there are young children visiting, make sure there’s adult supervision. And never force the cats to interact with children if they’re not inclined to do so.

Always allow the cats to be in control and to decide to greet guests when and if they’re ready. That’s why cats gravitate to the one person in the room ignoring them (often because he or she is allergic or doesn’t like cats).

If the cat runs from Uncle Joe taking over the second bedroom for Christmas, it’s not personal. “Unfamiliarity can be perceived as threatening, even if Uncle Joe doesn’t mean to be a threat,” Dr. Colleran says. Uncle Joe may also reek of unfamiliar cigar smoke or something else — who knows about Uncle Joe — and that will only confound the fear. (Note: Asking Uncle Joe to refrain from smoking isn’t unreasonable.)

Keep an eye on your cat to make sure he isn’t acting weird around guests, including other pets. Photography ©humonia| Getty ImagesImages.

A trend today is traveling with your pet(s). Even for those few cats who may prefer to hit the road with their people, it may not be fair to expect to stay in a home with resident cats. But all friends and relatives aren’t fair.

It’s certain that your cats wouldn’t invite the feline intruder. Definitely, visiting cats should be sequestered in the guest room — and the door scrupulously kept shut. “Even when the visitors go home, the Feliway that’s already plugged in should stay plugged in because the cats who live in the home will know who’s been in that room, even after thorough cleaning. And Feliway may calm their frazzled nerves.

If visitors are of the canine persuasion, says Dr. Weigner, who is in Atlanta, Georgia, “Make sure the dog is always on leash, and it may be necessary to use flea protection for your cats since dogs might bring unexpected guests with them.”

Make sure your cat is eating and using the litter box when house-guests visit. If not, or if you feel your cat’s quality of life is being impacted by fear, contact your veterinarian. There are nutraceutical supplements and pharmaceuticals that can help lower anxiety.

Steve Dale is a certified animal behavior consultant who’s authored several books, including the e-book Good Cat, and has contributed to many, including The Cat: Clinical Medicine and Management, edited by Dr. Susan Little. He hosts two national radio shows and is heard on WGN Radio, Chicago, and seen on syndicated HouseSmartsTV.

Read more about cats and the holidays on Catster.com: