What Is Your Cat’s Favorite Toy?

My cats' favorite toys include a tattered tent and a "magic baba." How about your cats?

When I first really started to get to know cats, I had no idea how much they loved to play. What a great discovery. I have had years of fun uncovering this wonderful characteristic of cats. Here are some of their favorite toys.

1. The practical and common box

Never underestimate the power of simple box. The cats love them as toys. Additionally, there are many ways to improvise with a box. Turn the box upside down and see if the cat can get under it. Prop the box up sideways and watch your cat fly into it. Choose a box that’s almost too small — cats love to squish into a tight space. Throw a toy in the box and watch the cats pounce. And the best game ever — take a wand toy, drag it into the box. The instant the cat goes after it, snap the string (with toy on the end) out of the box. Drive your cat crazy jumping in and out of a box this way. I think there’s something about the enclosed space a box provides that makes this game real fun for cats. 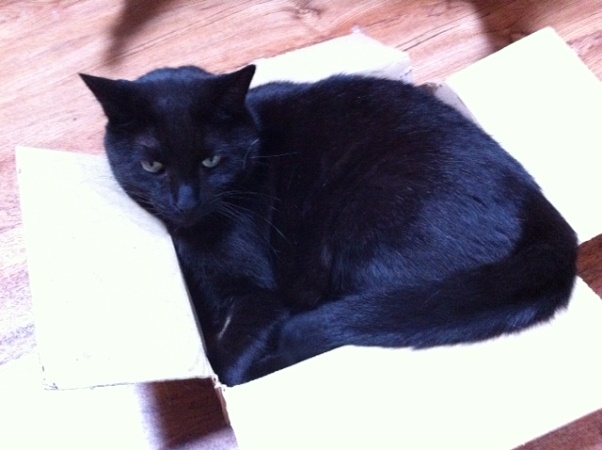 I picked up this cheapie at a garage sale. The cats’ favorite part? They like the rope around the bottom scratching pole and they love the tube for sitting in and hiding. I’ve not yet seen them use the top scratching post, and if I got ambitious, I could install a platform on the top of the toy (it’s missing — it came that way). But so far, this cheap little contraption is serving the cats well. 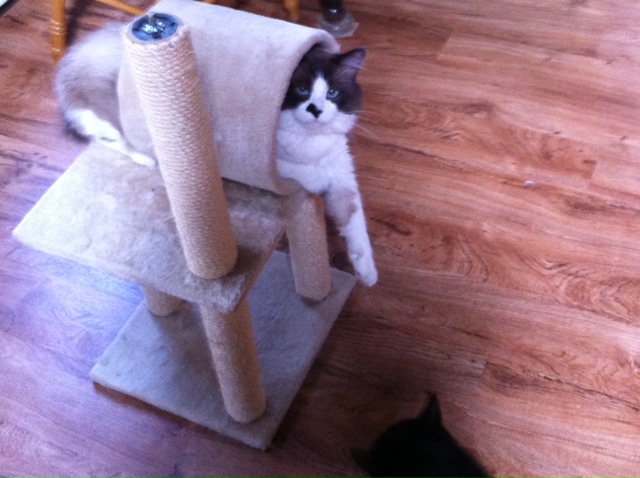 Chester adores his magic baba, and will carry this stuffed catnip pillow around the house, looking for someone to throw it for him. Sometimes, he’ll bring it all the way back to us. Other times, he’ll get in a mood and walk around with the buba in his mouth, howling as he walks. He can’t really howl with the baba in his jaws, so his sound seems like more of an angry, impatient yowl.

How did this toy come to be called “the magic baba?” I have no idea — we probably developed it one night when we were brainstorming silly cat nicknames.

4. The poor cousin to Feline Fisher — the homemade toy on a string

When we moved, we realized that the Feline Fisher didn’t make it to the new location. My husband designed this poor cousin to the feline fisher. It works well, and can get a cat riled up. But the Fisher is so light and bouncy, and it moves more like prey than our clunky substitute. 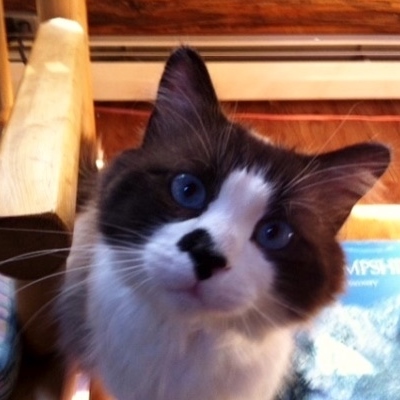 Rama loved this toy, especially if the tent was placed on a smooth hardwod floor. Once the tent was in the right place, Rana would leap into it and send it sliding down the floor. The tent is torn and tattered now, and I’m debating whether to replace it. It’s hard to wash because of its structure (embedded wire frame). This tent has a crinkly sounding bottom, which the cats love.

When a toy won’t do the trick, some cats look for a buddy. I’ve been fortunate enough to have Zorro and Norton hit it off. They provide each other with a lot of exercise and stimulation, and they’ve gotten to the point where they play fight rather than actually fighting. When these two get going, they’d hardly notice a toy dangled in front of their faces. 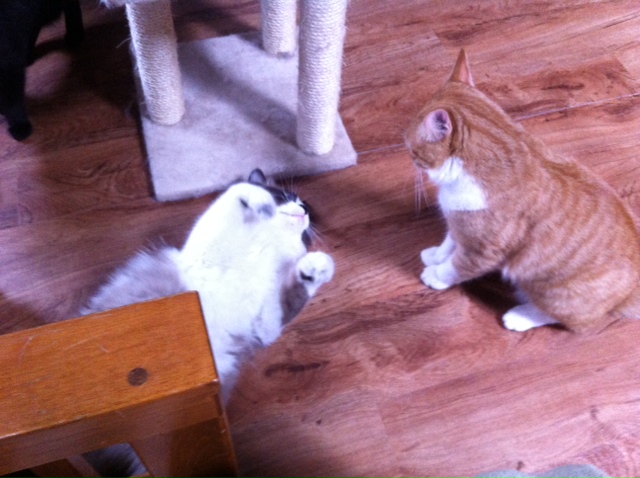 I’ve discovered that my cats love moths. If a moth flies in the house (and there seem to be plenty of them here) the cats are all over it. Bugs are endlessly fascinating as well, but nothing beats a moth for prey stimulation. The cats don’t even seem to mind eating the moths.

What do your cats love to play with? Is there a toy they can’t live without? Let us know in the comments!