Next on The Scoop: Let’s Talk: What Kind of Cat Food Do You Typically Feed Your Kitty?
Let's Talk

Um, Does Your Cat Flirt with You?

My cat gives me bedroom eyes and runs to the bedroom for snuggle sessions -- and I follow. Does your cat have similar behaviors?

Can a cat flirt? It sure seems like it. Some cats are more flirty than others. I hesitate to use the word “flirt” because that might imply that a cat has human behaviors; nevertheless, I think it happens. And it is so cute when it happens.

The first cat to introduce me to feline flirting was my black cat Rama. Rama came to us cranky and insecure. I worked with him, and eventually he bonded very strongly with me. And, I swear, he started to flirt. How did I know? Here are some of his flirting behaviors: 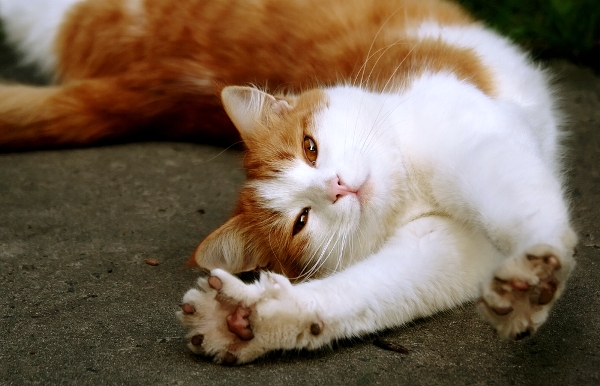 What do cat behaviorists think about cats flirting?

I thought I’d ask a behaviorist what she thought of what I’m seeing. Marilyn Krieger, certified cat behavior consultant and author, said that it’s common for cats to show their feelings of affection towards their favorite people as well as other animals they are bonded with. There are a number of adorable ways they display them. These include tail wrappings, eye kisses, nose kisses, nuzzling, rubbing and sweet vocalizations.

Marilyn said, “It’s a win-win situation. Everyone is reinforced — adoring cat parents love the little affectionate displays, some feel honored and chosen. Most people respond by giving the cats attention and sometimes treats, reinforcing them for their sweet displays.”

Marilyn makes a good point. We may be so happy to get these displays of affection that we inadvertently keep reinforcing them, whether we realize it or not. I know that I often reinforce behaviors in my cats (good and not-good) without thinking about it. 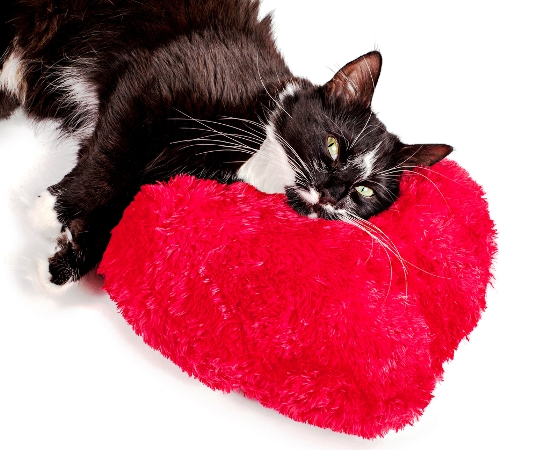 I know that I love these displays of affection. But, are they flirting? Maybe that’s me just having a good time with my cat. What is the difference between flirting and affection? Here are four behaviors I call flirting, which is the affection Marilyn is talking about.

Rama gives me the bedroom-eyes look, which I describe above. But perhaps this is simply because he’s a glossy black cat with a sultry looking face! What’s reinforcement and what’s due to the unique personality of this cat? Who knows?

Zorro is the master of the intense (flirty) stare! It’s not an “I’m threatened” or an “I’m freaked” stare. If I had to put human description to it, I’d call it an “I want to drink you up!” stare. Zorro demonstrated this first outside, through our window. He hardly knew us. How did he learn to do this? I’d love to know. Why do some cats behave this way and some don’t?

This is a variation on “making biscuits,” and some cats take it a step more. Zorro not only loves to pad my lap, he’ll lie on his back and knead the air when he’s happy. Those paws are always going.

This is a thing I’ve seen cats do when extremely happy. They’ll roll out on their back and side, and stretch long, exposing their belly to the world. I’ve had cats do this when introducing them to another cat, and I’ve had cats (most recently Zorro) do it to me. It looks like the ultimate expression of happiness. 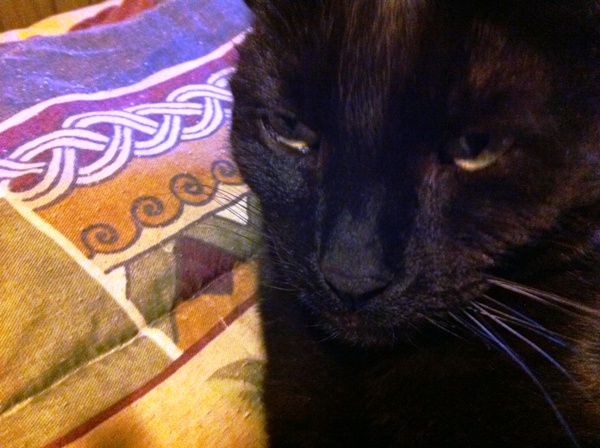 I think we humans like to think of things in our own context. Whether your cat is flirting or simply honoring you with special affection — does it matter? Enjoy the good vibes and the love being passed back and forth. I’ve always believed that our cats and our animal companions are great teachers of love. These behaviors are just one way that they teach us about love and connection.

Do your cats flirt? Is it simply affection or reinforced behavior? How do they show their love? Share your thoughts in the comments!