Next on The Scoop: Cat Fever Origami Cat Pendant
Breeds 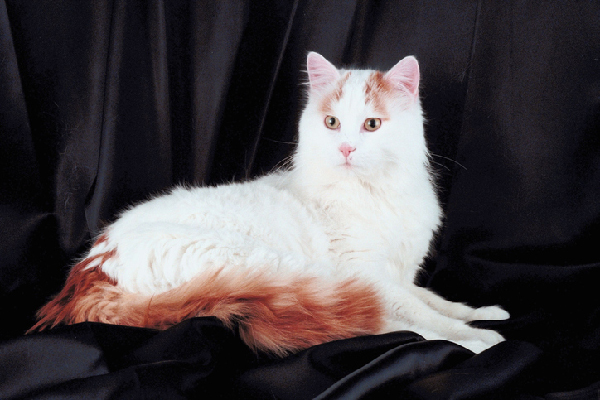 Ah, van cats — they look incredibly familiar but are actually relatively rare. A cat sporting the van pattern coat possesses a pigmented tail and head with an otherwise snowy white coat. Sometimes, colored patches can be found on their bodies. The Turkish Van breed is associated with these markings. This breed boasts ancient roots, originating from cats found in the Lake Van area of Turkey. There are a lot of surprises about van cats and this striking coat!

Van cats and the van pattern

Turkish Van cats have pigmentation only on their heads and tails. Photography © junial | iStock / Getty Images Plus.

Cat enthusiasts are familiar with the term “van pattern.” Again, this refers to a bicolor cat with a white coat and coloration on the head and tail and sometimes some color patches on the body.

There are many breeds of cats that have bicolor coats, the most popular among them are:

Sometimes nature does produce the van pattern within a litter of ordinary house cats or community cats. However, true Turkish Vans, from which the term was coined, are not randomly reproducing under your neighbor’s porch. Read on…

Turkish Vans are somewhat new to the United States. It is believed that they arrived in 1982, but the breed’s history is lengthy and varied. The Turkish Van arrived in England in 1955 with a British photographer, Laura Lushington, who journeyed throughout the Lake Van area capturing the scenery.

More important than the images, Lushington brought back two cats. She introduced the West to the famed “swimming cats” of the Middle East (more on that below). Yes, in addition to their distinctive coats, these kitties are predisposed to taking a dip!

From their one-of-a-kind coat, to their interesting global travels, to their penchant for swimming — the cats who brought the van pattern coat into contemporary lingo are exponentially interesting.

Cause for celebration and a study center

In addition to their stunning good looks and unique coat, Turkish Vans are considered a vital national treasure. So much so that there’s a Turkish Van Cat Research Center located in the Van province run by Yüzüncü Yıl University. The center is dedicated to raising awareness and interest in the special cats. Its goal is to preserve the breed and prevent it from going extinct. The center’s exalted residents receive between 500 – 600 daily visitors and it’s so successful that the demand to adopt one of the country’s “most important living cultural heritage” far exceeds the supply. It’s reported that the center can only fill 5% of the requests to receive one.

According to Hürriyet Daily News, the research center has built three pools specifically for the cats (males, females and kittens) to give them an outlet for their purported favorite type of exercise. Creating an enriched environment makes for happy cats!

Arguably there are few cat breeds that are so celebrated, so distinctive yet so relatively rare that you’ve probably never met one! But the Turkish Van, and its famed van pattern, is one of the most recognized and desirable physical traits in the world of felines, and if serendipity is on your side, you may just find yourself sharing your home with one!