Next on The Scoop: 4 Cat Mysteries to Read This Fall
Why Do Cats? 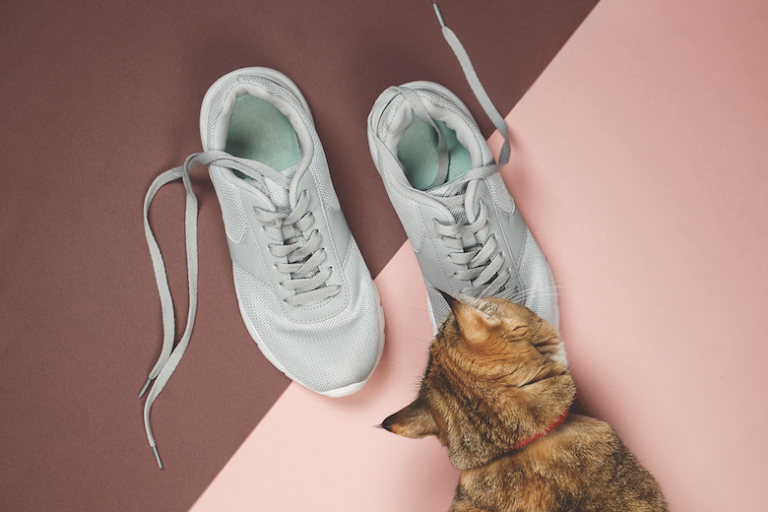 What is it with cats and smelly things?

You may have seen your cat sleeping on top of your shoes or rolling around on your smelly gym clothes. Maybe you were grossed out, laughed out loud or both. What is it with cats and smelly things?

Cats aren’t the only animals attracted to smelly things. To animals, the sense of smell is extremely important because they use it to communicate with other animals and learn about their environment. Animals rely on their olfactory sense the way we rely on our eyesight. A human’s visual cortex is the dominant part of the brain, while animals with a strong sense of smell have a dominant olfactory cortex.

A cat’s sense of smell

The number of olfactory receptors within the nasal passages indicates the strength of an individual’s sense of smell, according to a study published in the Indian Journal of Veterinary Science. With approximately 100 million olfactory receptors in the nasal cavity, a cat’s sense of smell is around 20 times stronger than a human’s with only 5 million.

As if that isn’t enough, cats have scent glands on their cheeks, around their mouths, under their chins and on their foreheads just below their ears. What humans lack in their sense of smell, they make up for in eyesight, as a human’s is about 10 times better than a cat’s, even though cats do see better in dimmer light.

Related: 8 Interesting Facts About the Cat Nose and the Cat Sense of Smell

Cats and other animals have an extra olfactory organ in the roof of their mouth called the vomeronasal (or Jacobson’s) organ. When a cat engages this organ, she might stick her tongue out, open her mouth wide and wrinkle her muzzle. This is also called gaping, sneering, snake mouth or the Flehmen response. Big cats, dogs and horses do this as well.

The vomeronasal organ is an extra sensory olfactory organ that allows cats to get a better whiff of something. You might think of it as what a magnifying glass is for our eyesight, the vomeronasal organ is for a cat’s sense of smell. Cats will use it if they smell something they have never smelled before and want to more accurately identify it. 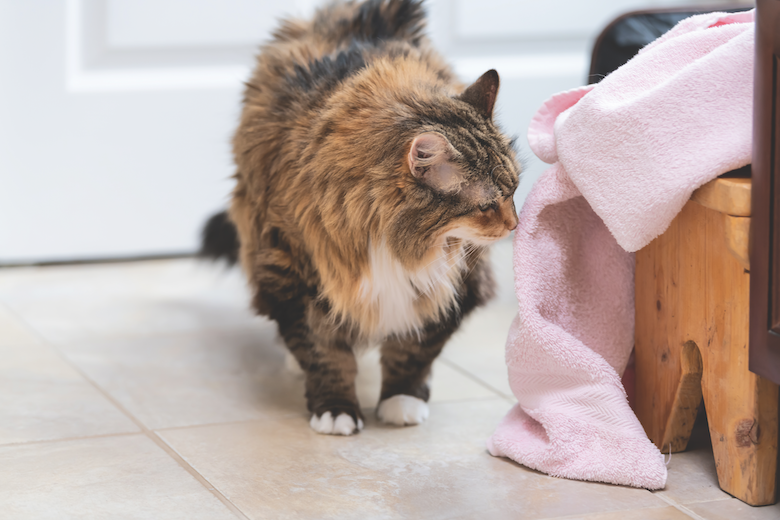 A form of identification

Cats identify things through their sense of smell. Cats recognize people by their scent and their voices, according to a study published in the journal Animal Cognition. Cats greet each other by touching noses. They also greet people by sniffing them and rubbing their scent on them to mark them as safe for future reference.

Cats are comforted by the scent of their favorite people. In fact, if you are eaving for a vacation or even work for just the day, leave your worn bathrobe out. You may find your cat sleeping on it when you get home, as a cat with separation anxiety can be comforted by your scent.

The inside of your shoes contain high concentrations of your sweat and scent. Stinky shoes also contain bacteria that are attracted to the warm, moist environment. The bottoms of your shoes tell a story of their own to a curious cat. Cats can pick up the scents of grass, dirt, parking lots, other floors you’ve walked on, and the scents of other humans and animals who were there before you. Sweaty gym clothes also appeal to bacteria and curious cats. Apocrine sweat glands, which are located in the armpits and groin areas, produce particularly potent odors that come from fats and proteins that bacteria can easily break down. That and your scent in high concentrations may explain why cats are interested in your smelly gym clothes.

Perhaps our cats simply want to be immersed in our scent. Take it as a huge compliment.

Read Next: 5 Weird Smells My Cats Are Crazy About

Posted in Catster Magazine, Why Do Cats, Life With Cattitude,

Cats Lift Us Up During Pandemic