Next on The Scoop: 10 Halloween Safety Tips for Your Cat 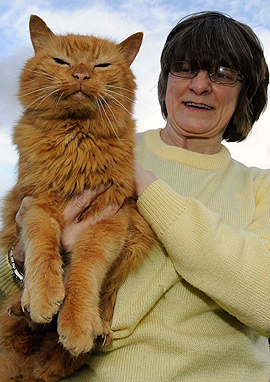 The odds-on fave to be crowned the next World’s Oldest Cat is 29-year-old Charlie Graham, an orange tabby who resides in Coulter, Lanarkshire in the UK. Were he human, he’d be about 133 years old. And he doesn’t look a day over 100.

The previous holder of the oldest cat title was Hestia, a 23-year-old from Cheshire. Hestia went to The Bridge in August.

Charlie’s owner, Sina Graham, adopted him when he was just six weeks old.

But more remarkable than his age is the number of passport stamps that Charlie has accumulated in the three decades he has spent with Graham, a former BBC World Service correspondent. He traveled with her to cover Nelson Mandela’s release in South Africa in 1990 and accompanied her to Kuwait for the first Gulf War and to the Lebanon-Israeli conflict. During Bill Clinton’s presidency, Charlie even hopped aboard Air Force One.

Graham said: “I took Charlie with me because he was a little piece of home and normality. He loved the traveling, although sometimes he’d hide in the bath if we were somewhere too hot.”

Graham greets Charlie with a cup of tea each morning. Yes, you read that right: a cup of tea. He developed a taste for it after stealing some left on a kitchen counter. (No word on which brew he prefers.)

Charlie has nursed Graham through three battles with breast cancer and a recent bout of bone cancer.

Graham said, “I knew I had to be all right – I had to get up each morning to make sure he was fed.”

She told reporters, “I really hope Charlie makes it to 30.

“I’ll be devastated without him. He’s been my lifetime companion.”