Next on The Scoop: Kitty Wants to Play with Baby’s Balloon 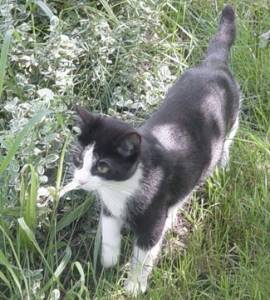 Many cat caretakers whose feline friends are allowed outside probably surmise that those cats very rarely go far from home. But a recently released study suggests that humans dramatically underestimate their cats’ inclination to roam.

ASPCA veterinary epidemiologist Margaret Slater and her colleagues conducted the study by following the activities of 42 cats living in Champaign-Urbana, Ill. The researchers put radio tracking collars on 18 owned cats and 24 unowned cats. More than half of the collars also held sensors that measured tilt and vibration, indicators of the cats’ activity level.

After documenting the cats’ behavior for 16 months, the researchers discovered a huge difference in how much the groups traveled and the amount of time they spent being active.

The study revealed that domestic cats’ average territory is about 5 acres (just under 2 hectares) in size. But even adventurous house-cats don’t cover nearly as much ground as feral cats, whose average range is approximately 388 acres (157 hectares).

There has been only one previous study using radio collars to compare the behaviors and movement patterns of owned cats to those of wild cats. That research, which took place in Texas, found that although feral cats did roam farther than house cats, those community cats that were fed in designated locations had smaller ranges than those that did not get fed.

Although the number of cats followed in Slater’s study is small, she says the results lend support to arguments in favor of trap-neuter-return programs. When community cats are fed and neutered, their range is decreased and the colony cannot grow, therefore putting less pressure on prey animals and minimizing the risks of fights with roaming house cats.