Cecil the Lion’s Murder Reveals a Drastic Need for Change

Editor’s note: We’re outraged over the killing of Cecil the lion, but we’ve chosen not to include gruesome photos of Cecil or pictures of his killer. This commentary covers not only Cecil but the many lions killed for sport — and how people can channel their anger to helpful ends.

I am deeply saddened by the murder of the magnificent lion named Cecil. As a big cat conservation supporter and advocate, I also have underlying anger toward Walter J. Palmer, the dentist from Minnesota who paid some $50,000 to kill an African male lion.

But before you focus all of your contempt toward Palmer, you should know that about 600 lions are killed every year on trophy hunts, including lions from populations that are declining because of other threats. Americans are responsible for 60 percent of the lions killed for sport in Africa and then shipped to the United States as trophies.

The source of public outrage

Palmer didn’t kill just any lion. He chose to kill Cecil, arguably the most famous lion in Zimbabwe’s Hwange National Park. Cecil was known to be comfortable around humans. He was a handsome lion with a full mane that was tawny near his face and faded to black across his shoulders. His face was stunning, really, and remarkably unscathed for a 13-year-old wild lion,.

People love a good comeback story, and Cecil was that. A younger male aiming to take over the older lion’s territory sent Cecil packing, but Cecil teamed up with another older male lion named Jericho and reclaimed his pride, living in the safety and protection of the national park.

This leader was a popular draw for tourists seeking photos. From what I have learned, Cecil obliged, often sauntering alongside the safari vehicles, even stopping to pose. He was a breathtakingly beautiful lion who, according to Johnny Rodrigues of the Zimbabwe Conservation Task Force, never bothered anybody.

Cecil was part of an ongoing research study

Cecil wore a radio collar, participating in an Oxford University study that began in 1999. The Wildlife Conservation Research Unit had followed the big cat’s movement since 2008. Cecil contributed remarkable data to that study, assisting the scientists toward their goal of understanding the threats lions face and to develop solutions.

The African lion is facing difficult times because of habitat fragmentation, loss of prey animals, and conflict with farmers protecting their livestock. Lion populations are in catastrophic decline across Africa. More than 200,000 lions roamed the continent just 100 years ago, but recent surveys estimate only 20,000 remain, and perhaps only 4,000 healthy male lions.

It’s infuriating to think that an American dentist packed his bags, flew to Zimbabwe, and paid some $50,000 to guides with the goal of murdering an African male lion for sport. Yet the way this “hunt” played out is even more reprehensible: Palmer and his guides had to lure Cecil out of the national park.

Palmer couldn’t legally kill Cecil within the park boundaries, so his group baited Cecil by dragging a carcass behind their vehicle and leaving a scent trail for the big cat to follow. This lion who seemingly liked mugging for the cameras and might have even enjoyed human contact had perhaps foolishly learned to trust humans over the years.

Once outside the park, the guides shone a spotlight on Cecil, disorienting him, and Palmer aimed a crossbow and shot Cecil. The lion was severely injured but strong enough to get away while the team of cowardly hunters tracked him down over a reported nearly two days before killing him with a gun. Cecil, the dominant male in his pride, suffered a long, agonizing death.

Cecil’s cubs are probably doomed too

When a male lion is killed, often a new group of males will overthrow and kill the remaining members of the weakened coalition. The incoming group will battle to take over the pride, which in this case will probably include killing Cecil’s cubs. Lionesses are often killed defending their young. So this greedy dentist with a propensity to kill for fun might have murdered 12 lions when he killed Cecil and weakened the pride in the future.

The loss of Cecil’s cubs because of trophy hunting is counter-evolutionary. When the hunters choose the large, healthy, most handsome males from a population for their trophy rooms, they rob the lion pride of those individuals who would live long lives protecting their mates and cubs, contributing their genes to the next generation.

Walter J. Palmer seems to have a thirst for blood, which I have a hard time reconciling with his chosen profession. I can’t conceive of a medical professional enjoying killing other sentient beings.

In a statement, Palmer said he believed the hunt was legal.

“I had no idea that the lion I took was a known, local favorite, was collared and part of a study until the end of the hunt,” he said. “I relied on the expertise of my local professional guides to ensure a legal hunt.”

Palmer is no stranger to killing animals where he is not permitted. He was given a year’s probation and fined $3,000 after pleading guilty in 2008 to making false statements to federal officials about where he killed a black bear in Wisconsin, NBC News reported. In 2006, Palmer was part of a group that killed a black bear 40 miles outside of the permitted zone. The group agreed to tell authorities that the bear was hunted within the permitted area. NBC cited court documents indicating that Palmer falsely stated to an agent of the Department of the Interior, U.S. Fish and Wildlife Service, that he believed the bear had been killed legally. Palmer was also convicted in Minnesota in 2003 for fishing without a license.

In the case of Cecil, Palmer had no permit to kill this lion in the location he did — and that makes him a poacher. In Zimbabwe, poachers are usually shot dead in their tracks. This hunt was illegal.

Palmer doesn’t denying he shot Cecil. He is proud to be a big-game hunter, hunting all over the world using bait and lights to murder animals. Photos circulating online show the dentist proudly posing with a leopard, a rhino, and a California bighorn sheep. He has killed at least 43 animals with his bow and arrow.

Many other lions have been lured

Ian Michler, a South African conservationist, claims that lions are lured like Cecil was all the time. Michler’s 2015 documentary, Blood Lions, exposes the nearly 1,000 lions who are bred in captivity in South Africa and fatally shot every year by trophy seekers who pay $20,000 to $50,000 to kill them in a small area. These same lion breeders charge tourists, mostly from Europe, Australia, and the United States, to pet and hold lion cubs who are destined for trophy kills when they grow older.

Paula Kahumbu, executive director of Wildlife Direct, said in a statement, “Hunting for pleasure is not something that Africans share with our rich western counterparts. We have a deep cultural and spiritual connection to our wildlife, and Africans reject the arrogance of people with big money.”

The global outcry after Cecil’s death is shining a brighter light on what opponents of the trophy hunting industry have been claiming, that trophy hunting threatens vulnerable species all across sub-Saharan Africa. Hunting is banned in Kenya and Botswana, which rely on income from the tourists who come to shoot wildlife — with their cameras. Many more countries allow trophy hunting, including South Africa, Namibia, and Tanzania, claiming that it benefits local communities and funnels the larger fees from the hunters back into conservation.

Jeff Flocken, the North American director for the International Fund for Animal Welfare, says there’s no proof in the claims that trophy hunting brings millions of dollars in revenue to local people in poor communities. The pro-hunting International Council for Game and Wildlife Conservation have reported that only 3 percent of revenue from trophy hunting ever makes it to the communities affected by hunting. The rest is funneled to national governments or foreign-based outfitters.

“Trophy hunting is a practice that has well passed its sell-by date in the West,” says Kahumbu. “It’s a barbaric, uncivilized practice that has not benefited Africans or conservation. The deep grieving and heartbreak that is exploding across social media reveals that despite the deep poverty in Africa, many Africans are not motivated just by money.”

Jane Goodall issued a statement about Cecil’s death from the Jane Goodall Institute indicating how shocked she was: “Not only is it incomprehensible to me that anyone would want to kill an endangered animal … but to lure Cecil from the safety of a national park and then to shoot him with a crossbow…? I have no words to express my repugnance.”

It is the most difficult part of studying wild animals. You know there will be losses. Those losses are hard enough when they happen from natural causes. The documentary The Last Lions, by Dereck and Beverly Joubert, will break your heart but leave you hopeful.

The resilient lioness struggles to raise her cubs alone against the odds in Botswana’s Okavango Delta. Ma di Tau’s (Mother of Lions) battle is filmed against the unspeakable beauty of the Botswana landscape and will leave you breathless. The only thing that will save your heart from irreparable damage is that the lives lost in the film were not at the hand of a humans out for a good time.

Palmer claims he had the proper permits and had hired several professional guides, so he does not deny he shot this lion. He is proud to be a big-game hunter, hunting all over the world using bait and lights to murder animals.

Channel your anger at Cecil’s death toward change

While the world expresses anger toward one despicable man, the African lion needs you. We can’t bring Cecil back, but we can apply pressure to change policies in favor of a future for lions. Goodall reminds us, “Only one good thing comes out of this — thousands of people have read the story and have also been shocked. Their eyes opened to the dark side of human nature. Surely they will now be more prepared to fight for the protection of wild animals and the wild places where they live. Therein lies the hope.”

Cecil’s death isn’t just about one lion. This is about every animal who has suffered at the hand of one person’s misguided desire to kill for a trophy. To turn a magnificent being into a trinket to be hung on the wall, forgotten, collecting dust.

How you can help save the remaining African lions

About the author: Joanne McGonagle is a big cat conservation advocate with a Master’s of Zoology from Miami University’s Global Field Program, where her focus of study was on big cat conservation. She is currently an instructor for the Global Field Program. She is also the author of award-winning The Tiniest Tiger’s Conservation Cub Club, which focuses on all cats big and small, and the founder of Triple T Studios, where proceeds from sales are donated to global conservation programs. Follow The Tiniest Tiger on Facebook and Twitter. 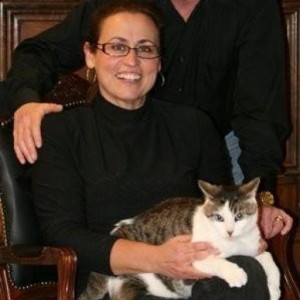