Next on The Scoop: 5 Reasons I’m Grateful My Kids Grew Up With Cats

We Visit Oakland’s Cat Town Cafe, the First Cat Cafe in the U.S.

For years now, we’ve been repeatedly tantalized by the news — which, time after time, proved to be false — that a cat cafe was about to open in some American city. 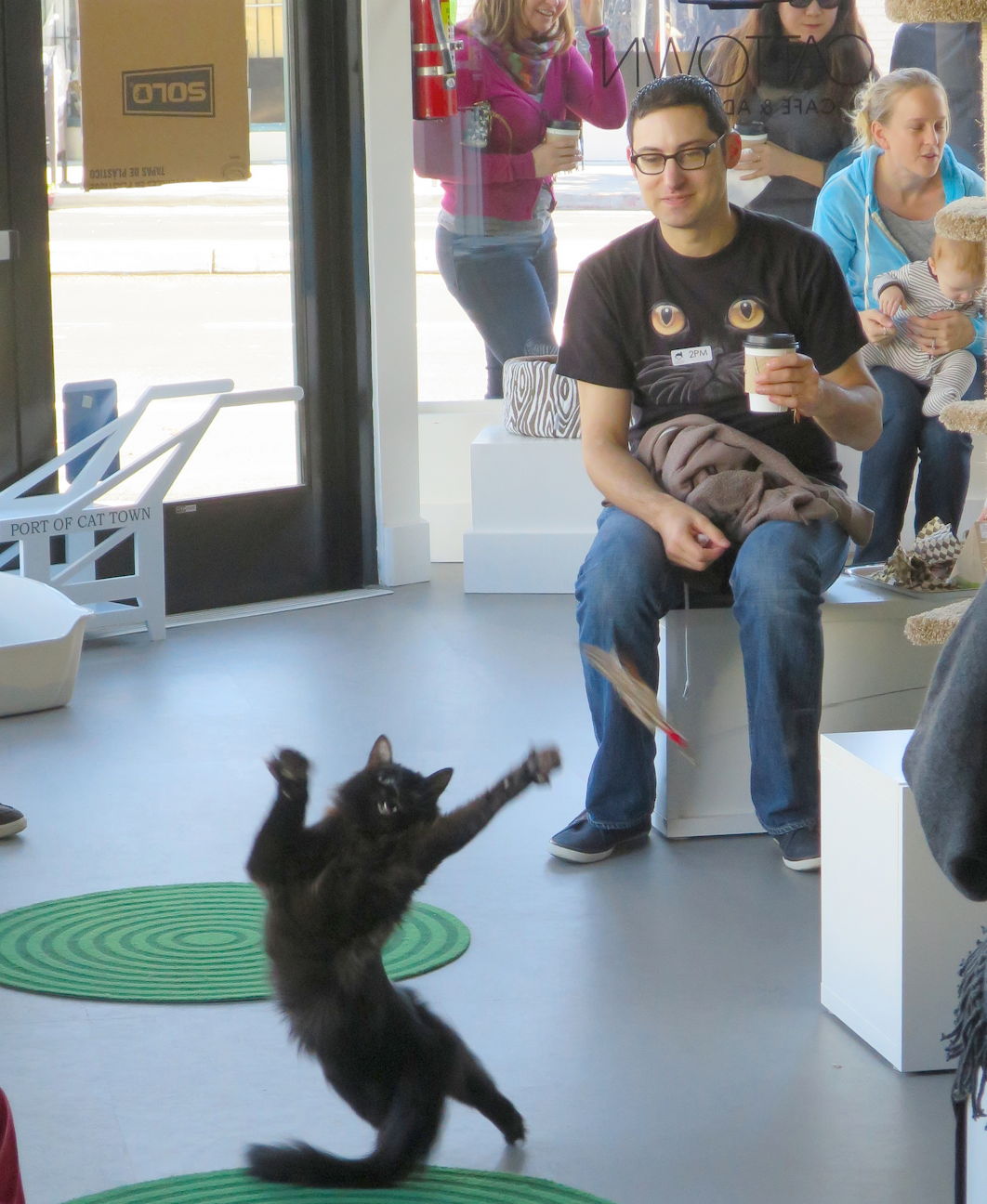 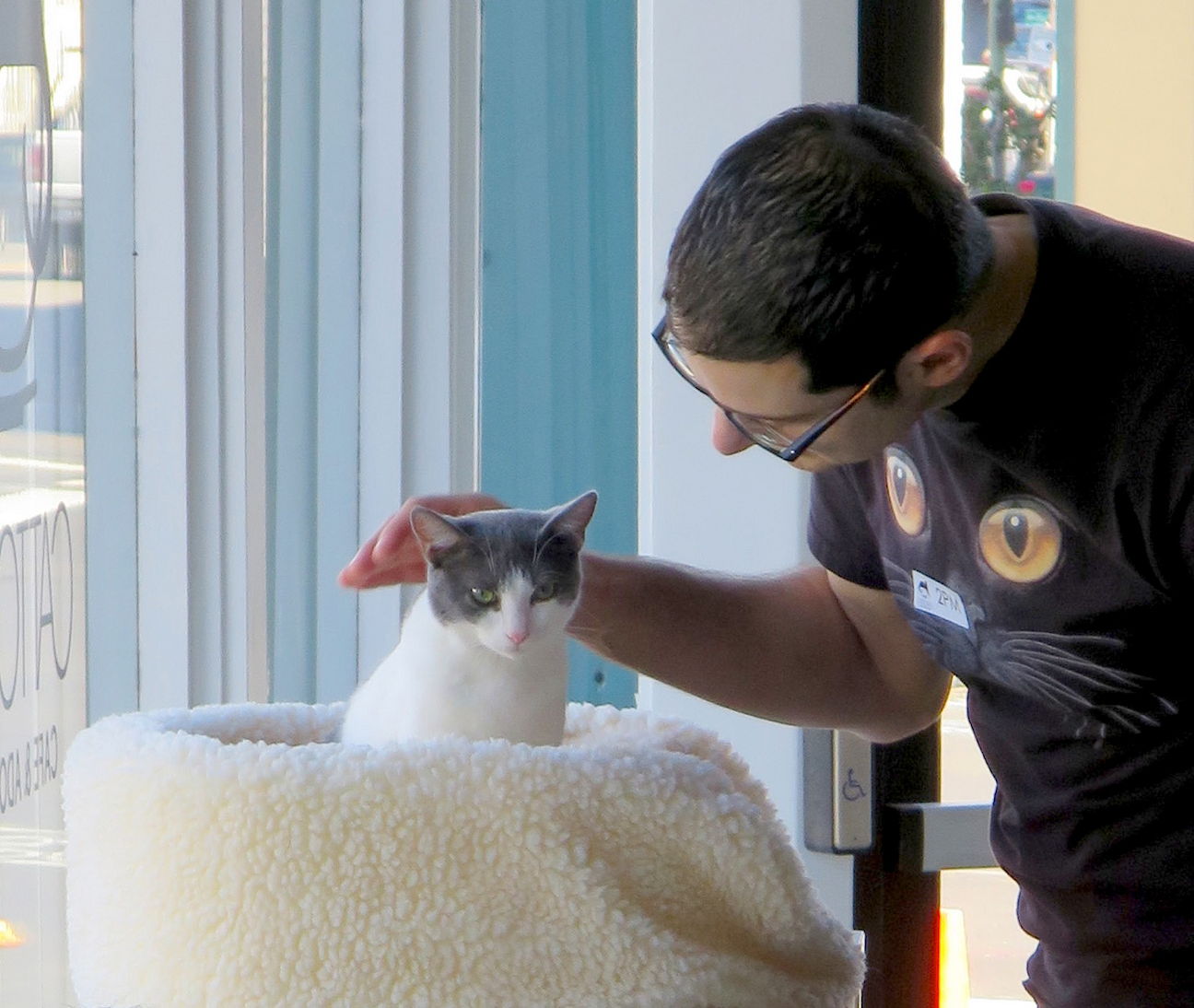 Until now. The USA’s first-ever cat cafe had its soft opening on Oct. 25 and is now up and running. And where? Which innovative city beat to the punch all those others — were lookin’ at you, Seattle, Denver, Cleveland, Portland, San Diego, San Francisco and NYC — that currently have cat cafes in the works? 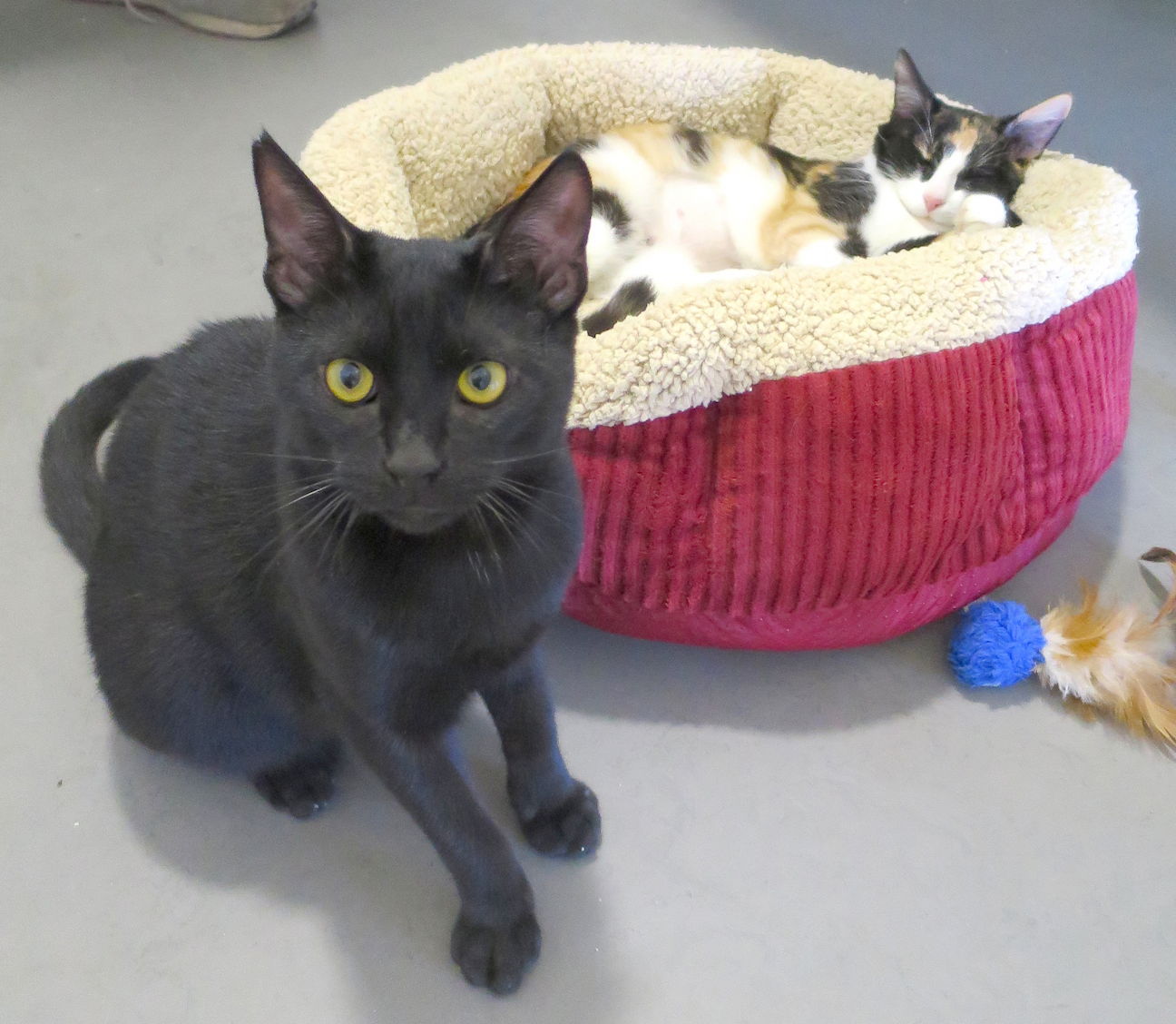 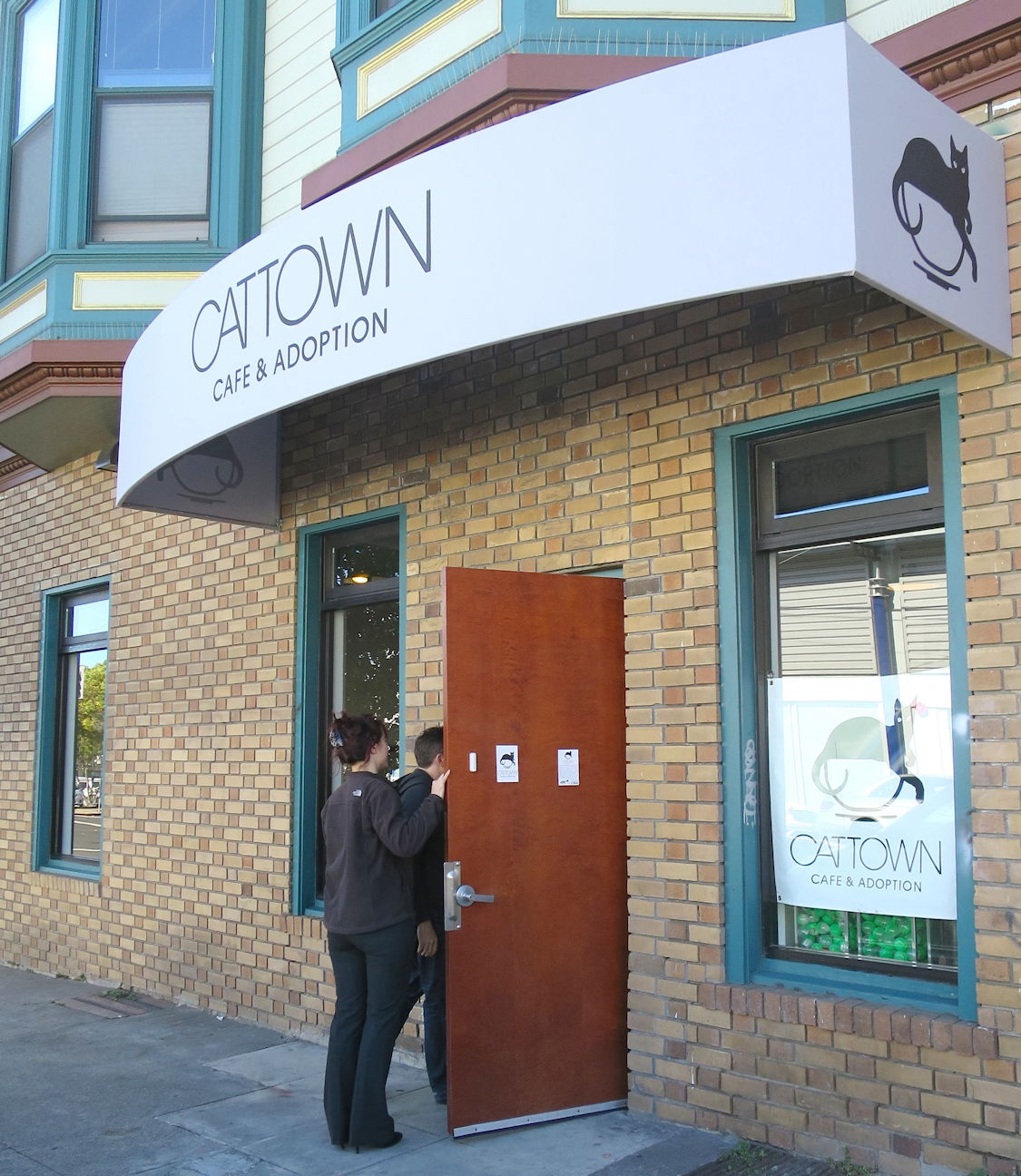 Festooned with murals and artisanal play structures straight out of an Oakland-skyline dreamscape, Cat Town Caf├® is the interactive, pat-and-snack sector of an Oakland-based nonprofit, also called Cat Town, which since 2011 has been rescuing and fostering especially sensitive, hard-to-place, at-risk cats in partnership with Oakland Animal Services, the city’s overburdened and under-resourced municipal shelter. 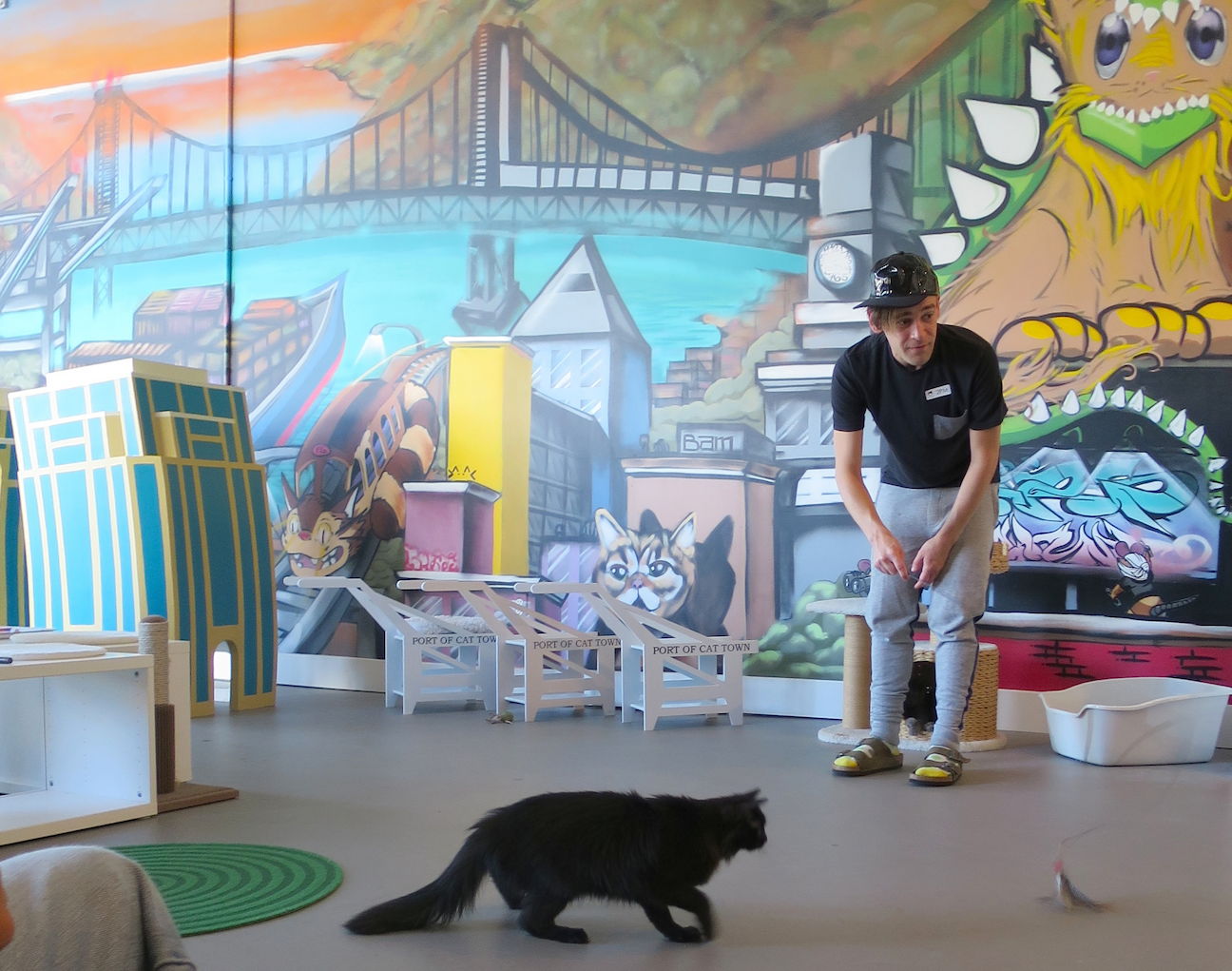 “Our mission is to get cats out of the Oakland shelter,” says co-proprietor Ann Dunn, who volunteered at OAS for several years before founding the Cat Town nonprofit. 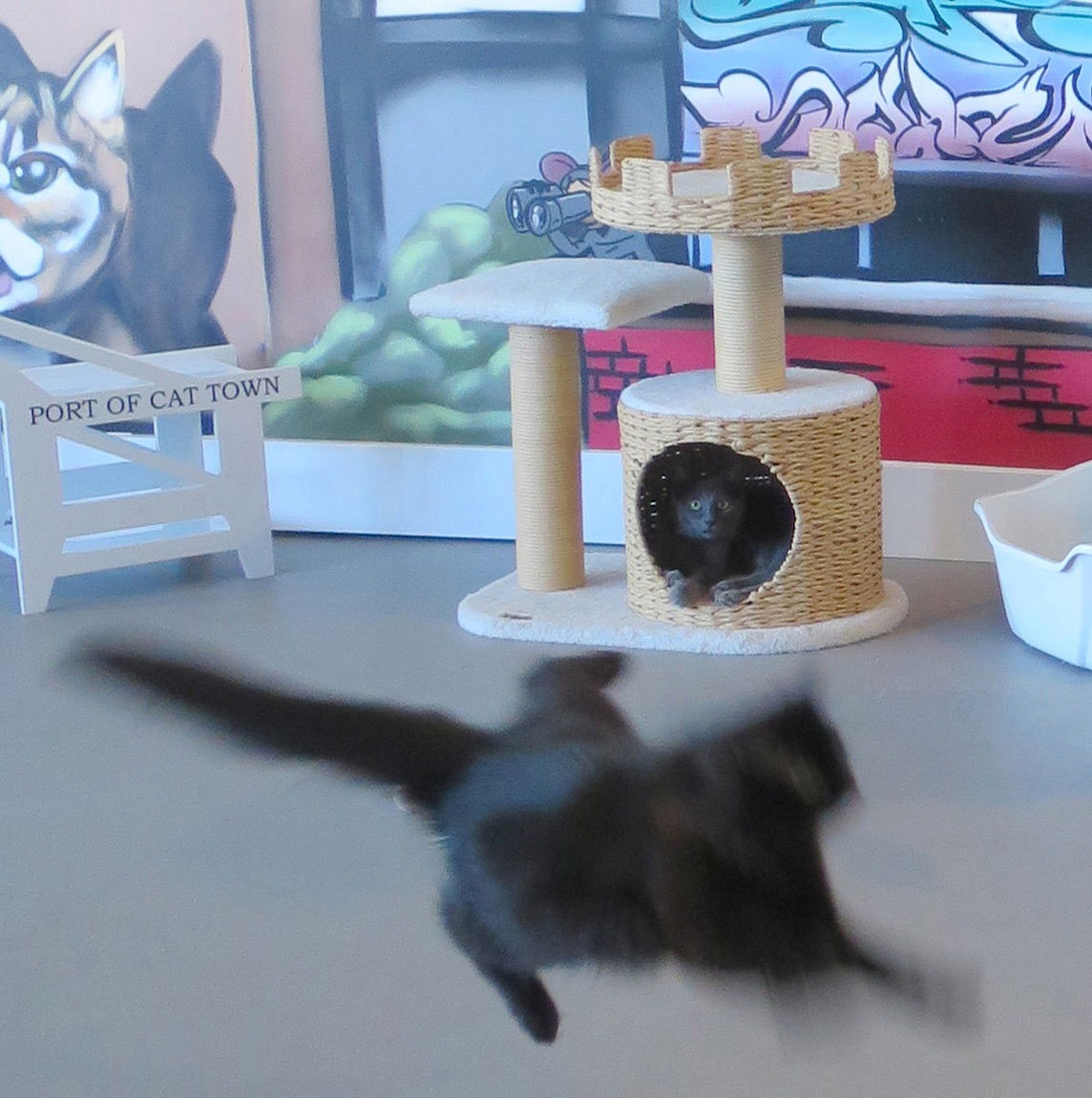 “I saw cats who were brought to the shelter as kittens and spent their whole lives in cages. At the shelter, cats spend at most 15 minutes a day outside their cages. I just kept thinking: What if we didn’t have to put them back?”

“I never imagined it would lead to this,” she says. “But it became kind of an obsession: What can I do to get these cats out of these cages?”

The rotating groups of felines with whom guests can socialize at the cafe are former shelter cats. Dunn and her colleagues hope human visitors will fall in love with them and adopt. 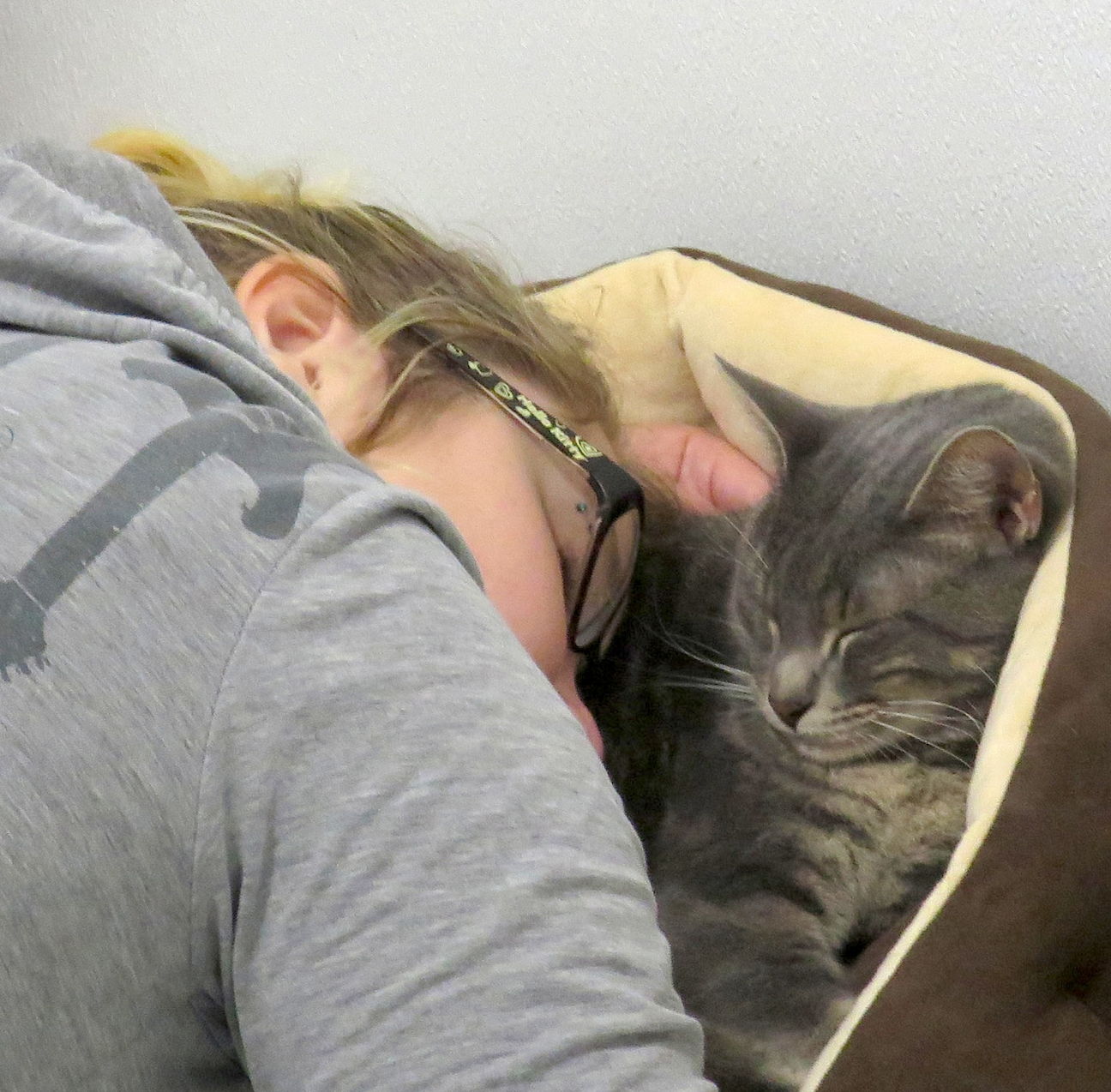 They’re carefully preselected based on their personalities and level of sociability, and have undergone a series of screenings to ensure “that they won’t be too stressed out in here,” Dunn explains. 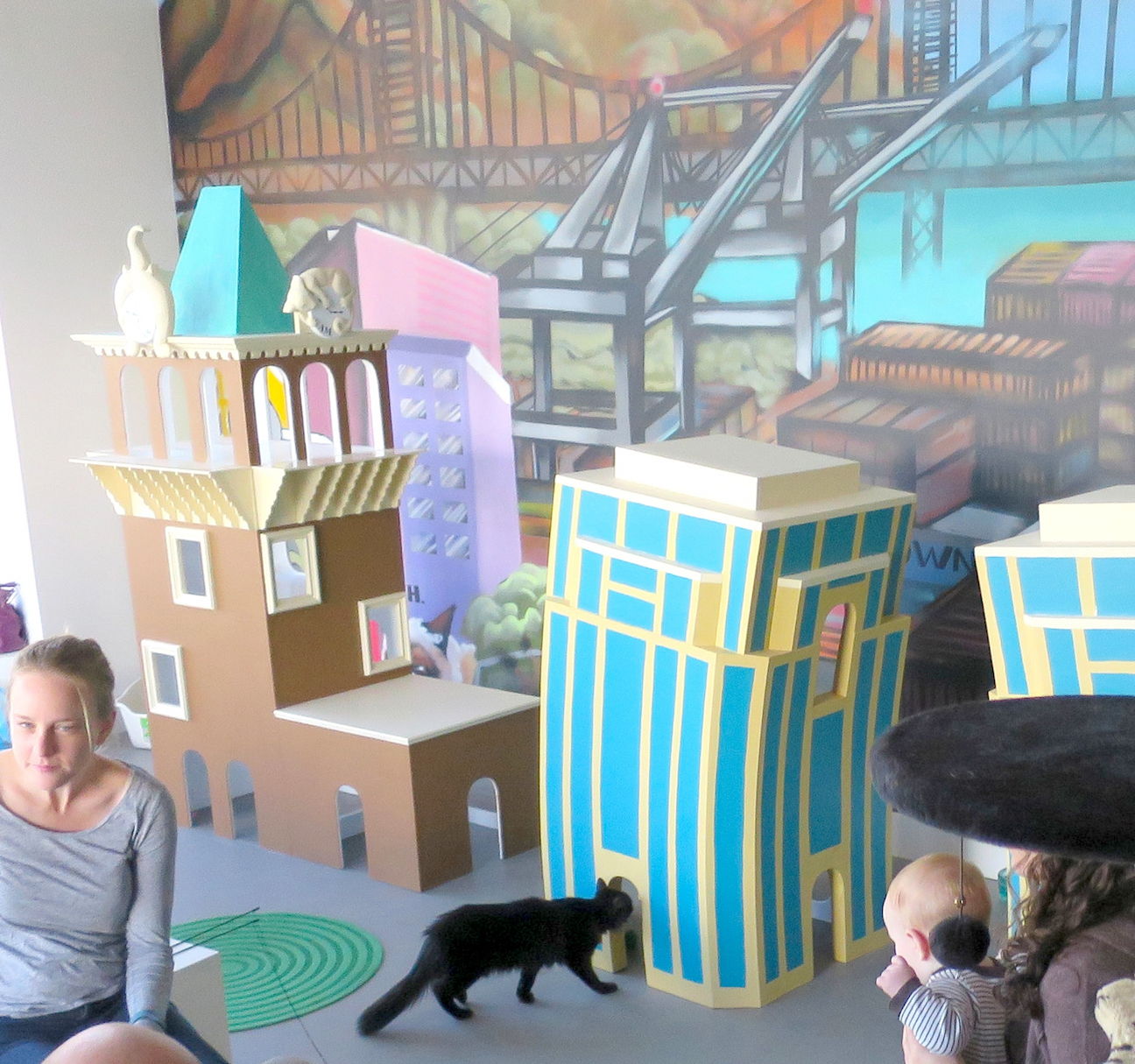 “They come from the shelter, where they’re totally under-stimulated, to this environment with all these people in it, where they could potentially be overstimulated. That’s a huge leap. If a cat panics in the shelter environment, that cat might not be able to acclimate to the cafe environment.” 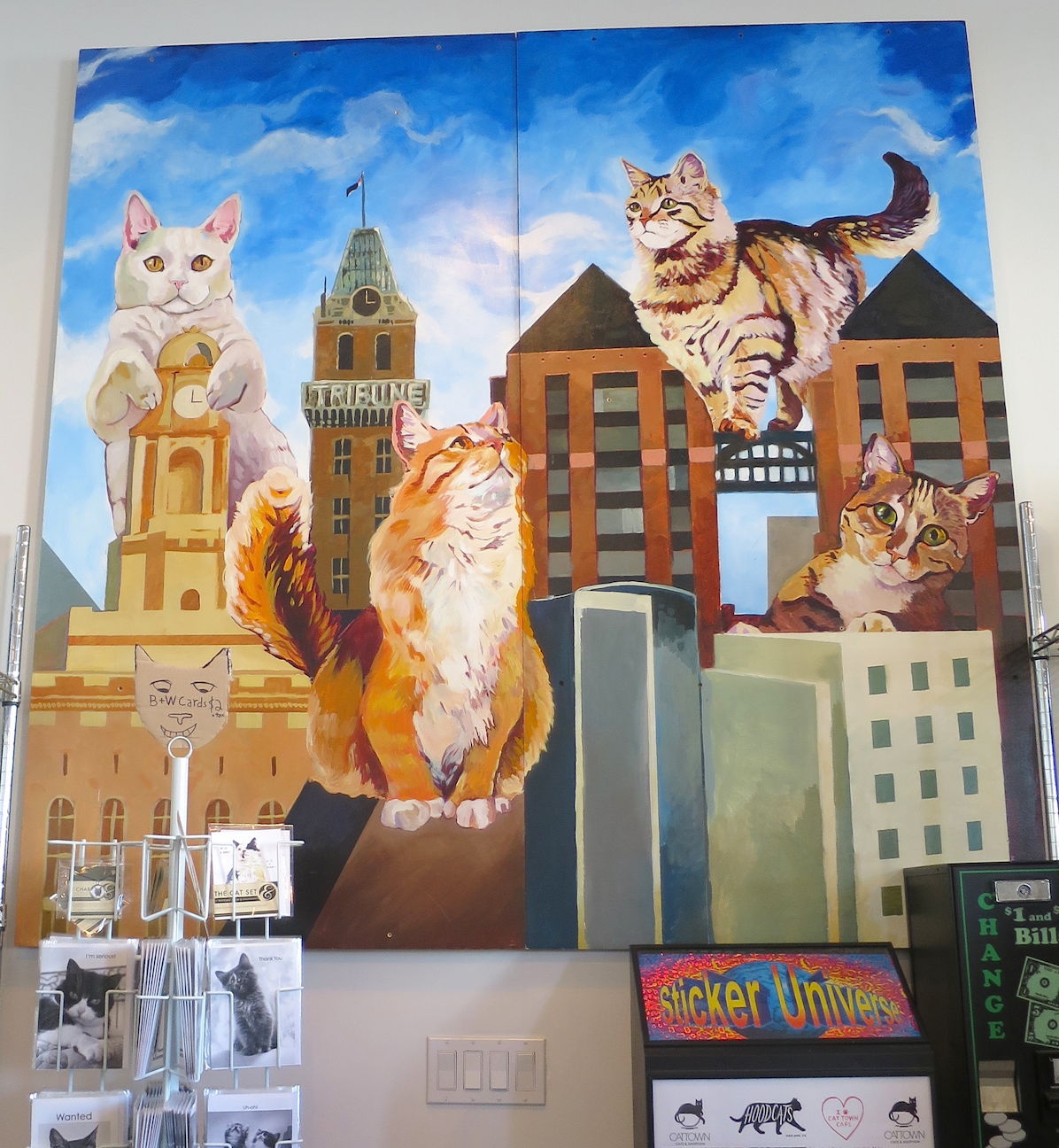 So she seeks out shelter cats that are clearly “tolerant of people and tolerant of other cats.” 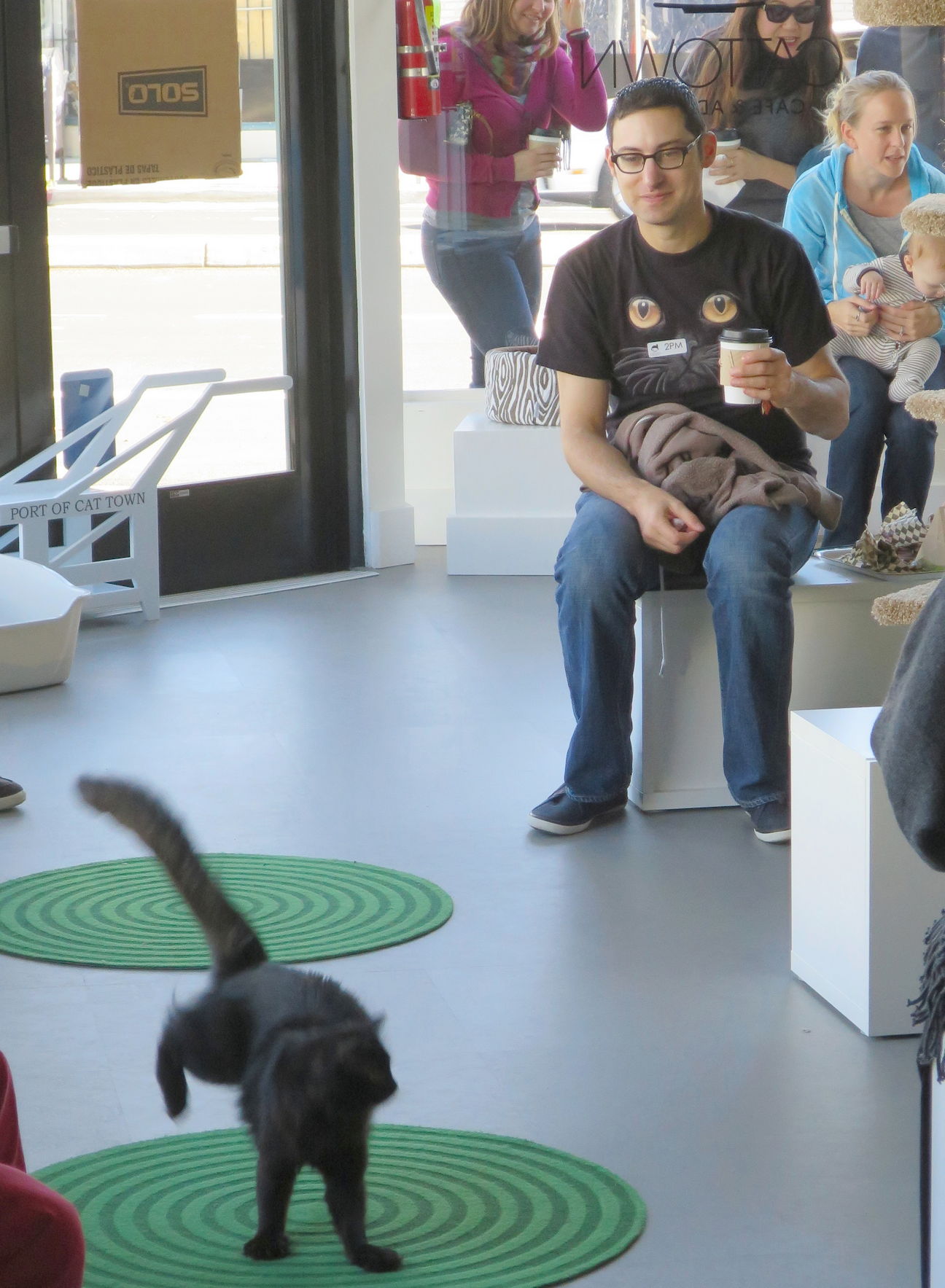 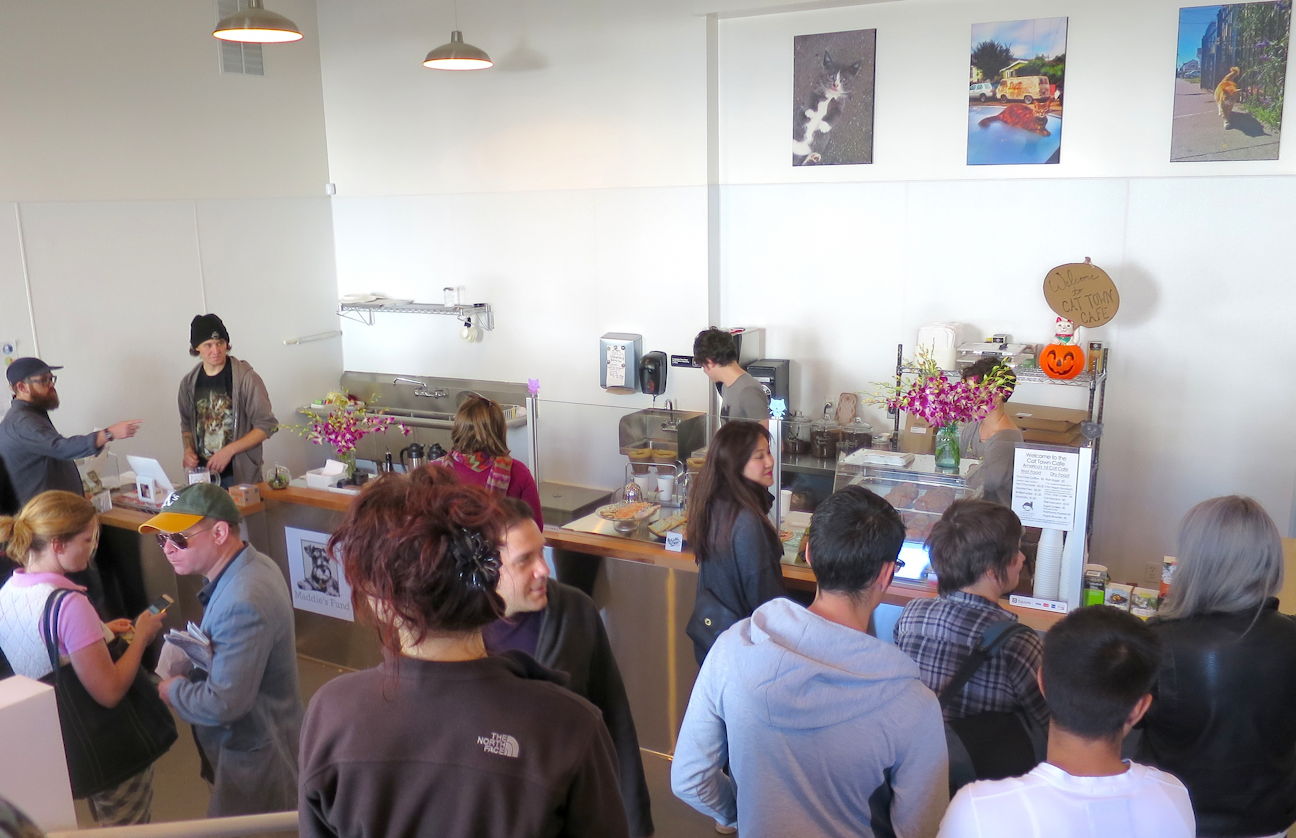 In an airy entryway, guests can buy cat-related art and gifts, locally baked snacks and locally roasted Bicycle coffee while waiting to be ushered into the 2,200-square-foot Cat Zone. 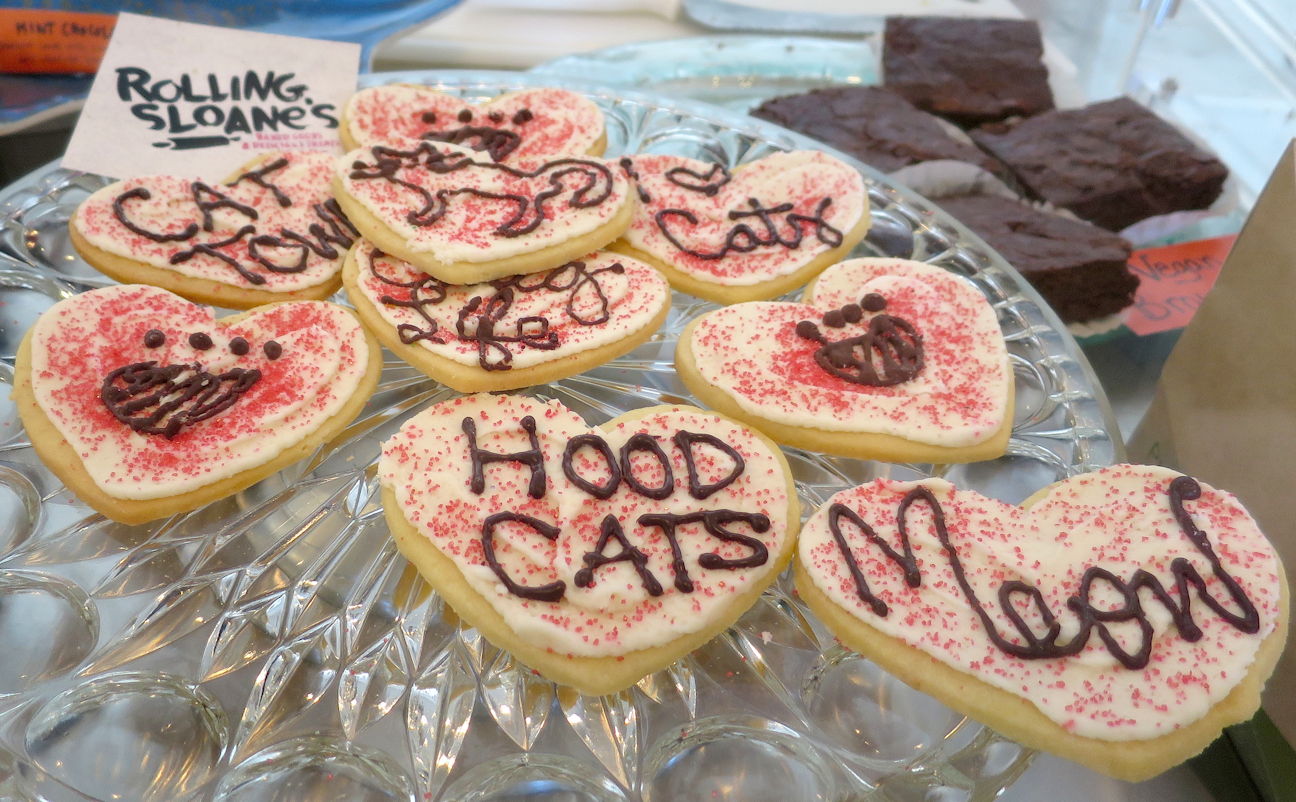 The smaller of its two rooms contains kitty beds and kitty litters. 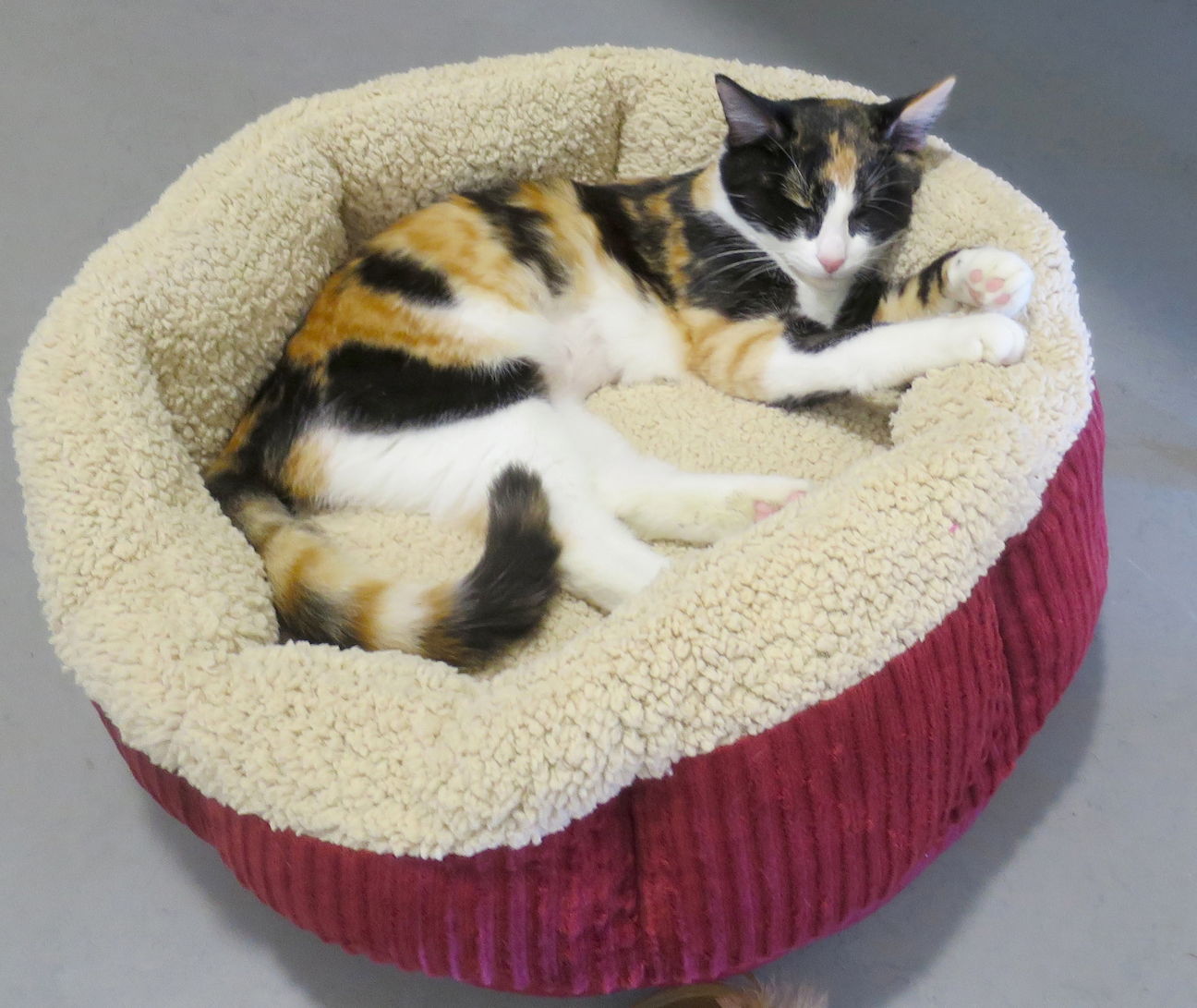 The larger room has toys, play structures and plenty of seating for felines and humans alike. In the Cat Zone, guests can also buy dehydrated treats from Oakland-based raw cat-food purveyor RAWR. 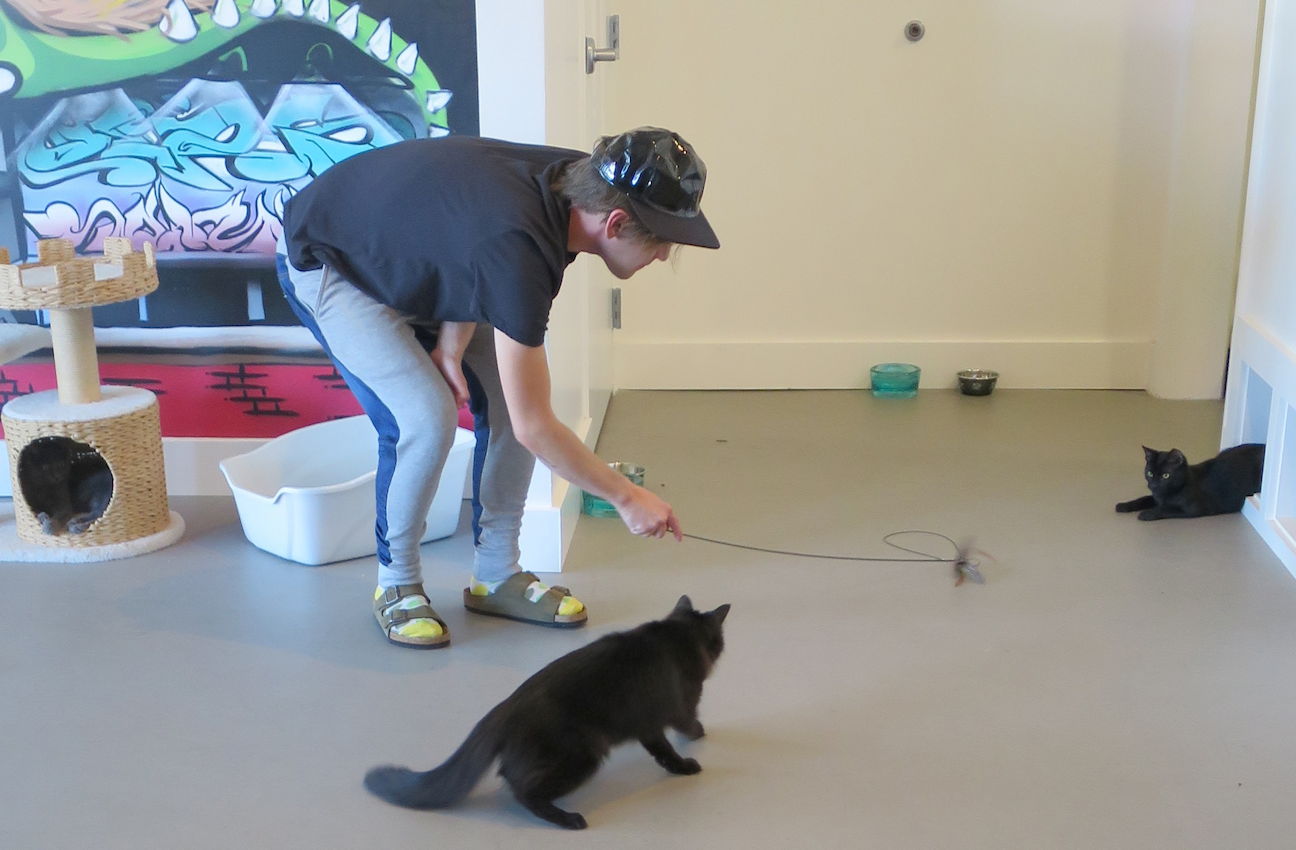 “We’re the only rescue organization that’s doing anything like this,” Dunn says as one cat delights in being petted by a human visitor, another curls up under the chair of a man reading a book, and another chases a feather attached to a string pulled by several human visitors at once. As a calico and a tortoiseshell sleep soundly side by side — “Let sleeping cats lie” is one of several rules posted by the door — a sleek gray cat prowls in and out of a skyscraper-shaped play structure as a baby watches, rapt. 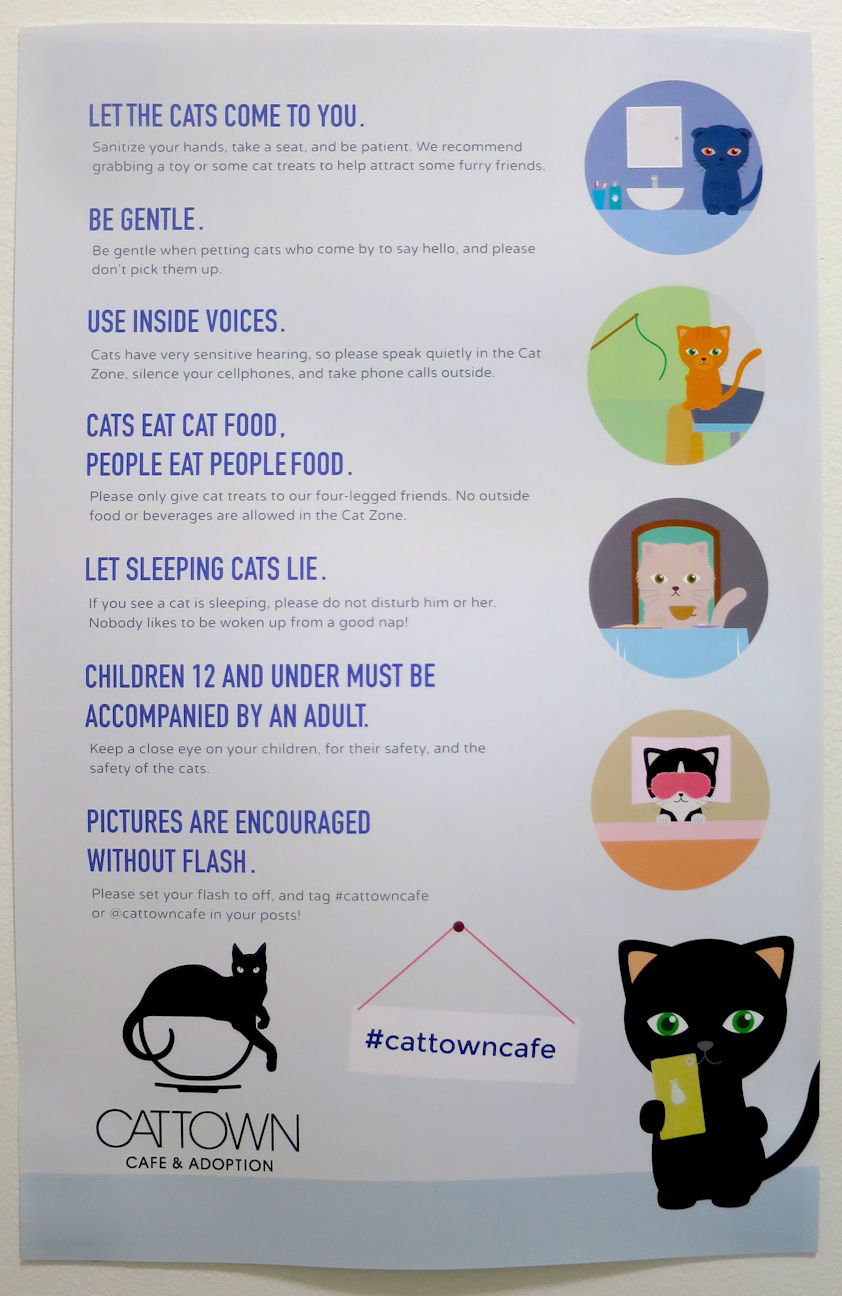 “I’ve talked with the organizers of other cat cafes in other cities — I won’t say which ones,” Dunn confides. “And I can tell from those conversations that some of them have absolutely no idea about cats or about what they’re getting themselves into.”

Japan’s cat cafes are buzz magnets, “but the Japanese cat-cafe model is such that the cats are living their lives in the cafe spaces. That’s kind of depressing to me. I’d rather have the cats skip this whole cafe step and go directly from the shelter to adoptive homes. 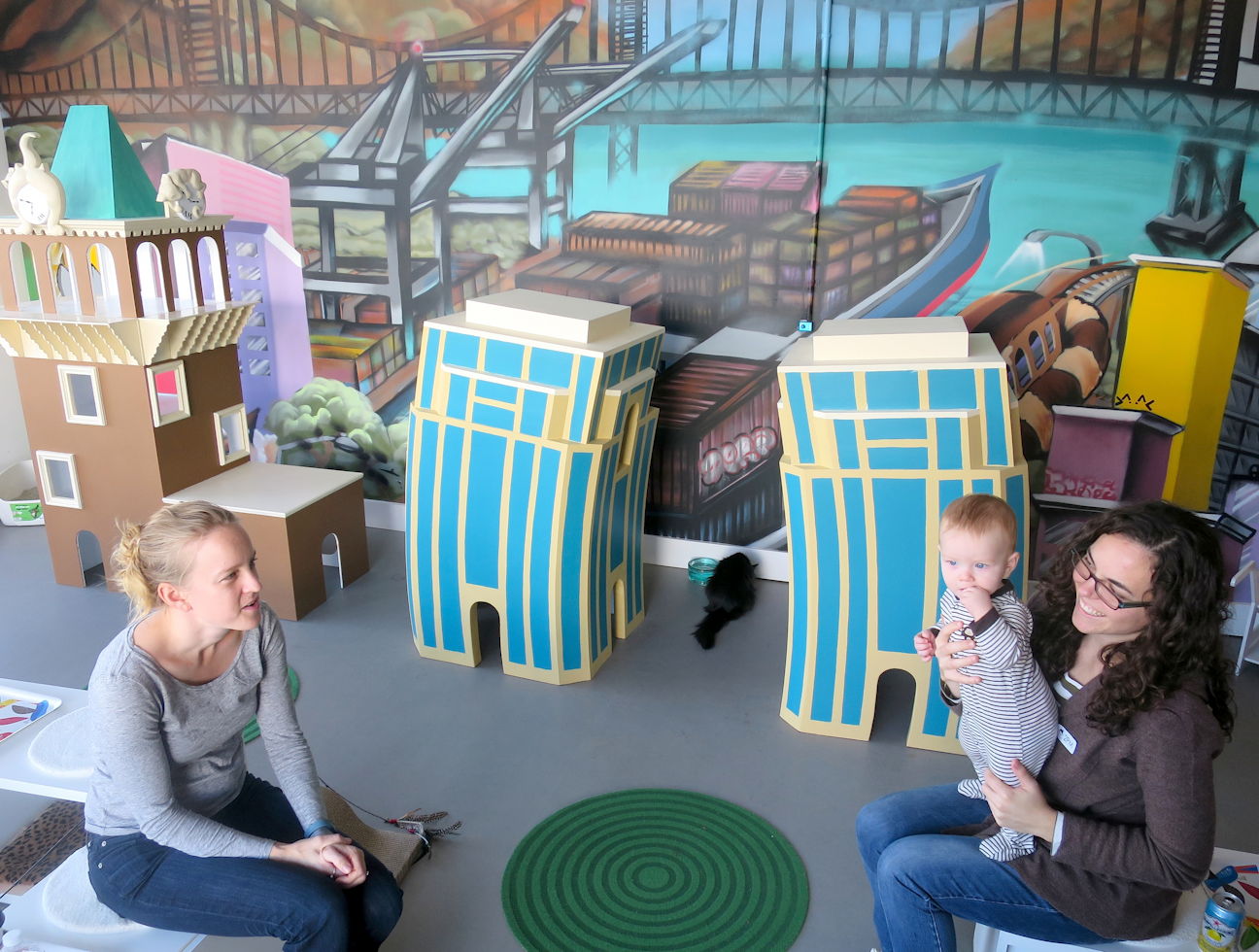 “The Japanese model stems from the idea that Japanese people tend to live in very small spaces in which they’re unable to have pets,” she says. “The cat cafe is the way they can get their cat fix. So a Japanese cat cafe is a service to the human visitors, but maybe it’s not in the best interest of the cats. 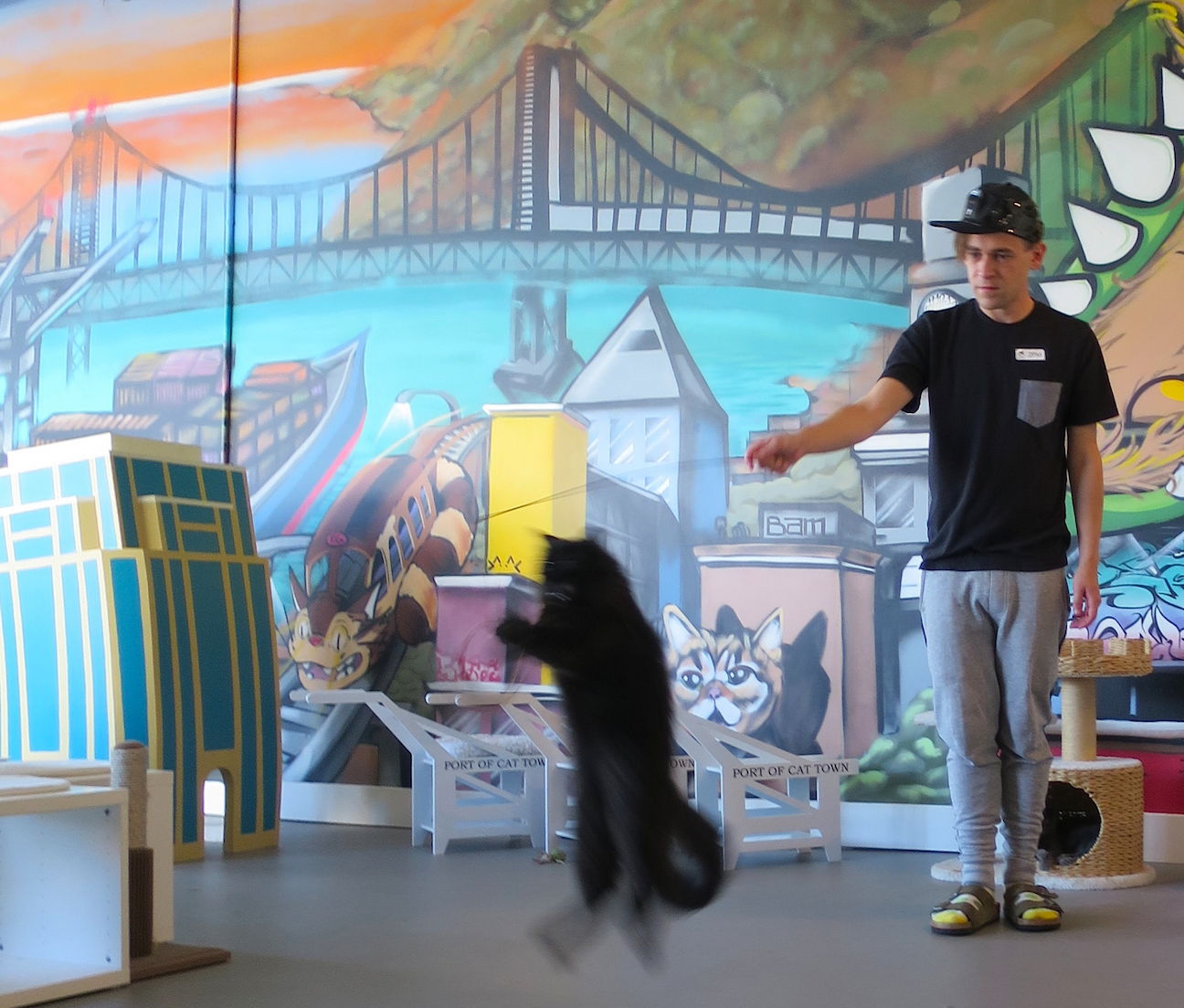 “We’re kind of the opposite of that, because we’re doing this primarily not for people but for the cats. We’re here to save cats from the shelter. That’s the overall goal, rather than just having people come in here like it’s a petting zoo.”

“We wouldn’t do this at all if we didn’t think it would get the cats a ton of exposure and thus get them adopted more quickly,” she says. 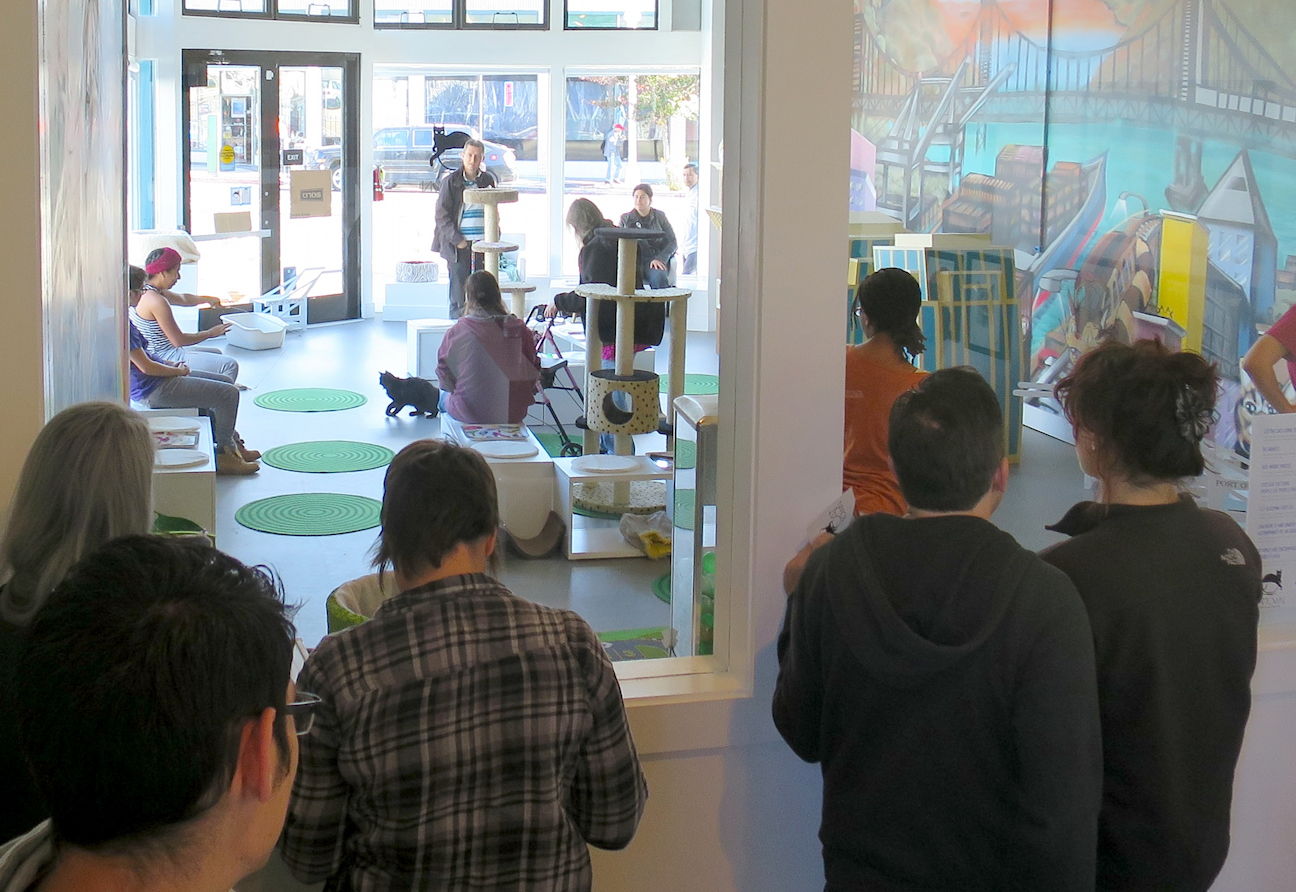 Do the cats enjoy the company of bearded hipsters, tattooed cyclists and other new human friends?

“I thought they’d be happiest on the days when we’re closed,” Dunn laughs. “But I was wrong. When we’re closed, the cats are looking around all disappointed, like, ‘Where is everybody?'”

How to Entertain Your Cats During COVID-19 Pandemic