Next on The Scoop: Cats Love Motorcycles, and These Photos Prove It
In the News

Be Good to Cats: Knock on the Hood of Your Car Before Driving

In cold weather, cats sometimes crawl into wheel wells and other parts of cars to stay warm.

Most Internet memes bring out my inner grinch really fast. Admittedly, some people would question whether “inner” actually applies in this case, but the point is: Your average Internet meme isn’t worth the paper it’s printed on. Generally, they consist of people telling the same joke over and over and over, as if it’s still as funny the 11,934th time as it was the first time.

But here’s a picture that might well be meme-worthy. It has to do with cat health and safety during cold weather, and it looks like it’s picking up momentum on Twitter and Facebook. For once, I recommend that you tweet and circulate it as much as you can. 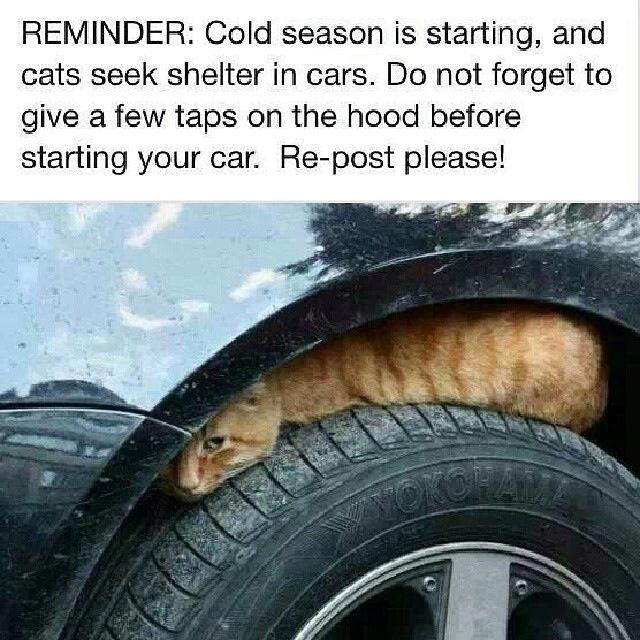 We’ve written several times about how you should bang on the hood of your car a couple of times before starting the engine in winter, in case part of your car is being used for warmth by a local cat. A picture is worth a thousand words, though, and this one makes the point nicely. Despite all that fur, winter can be a very uncomfortable time for cats, especially those who aren’t fortunate enough to live with humans. To a cat living outside, or just waiting for a chance to get back in the house, there are a lot of nooks and crannies in a car that look very inviting.

The wheel well is just one place that a freezing cat might find warmth and shelter. They may also find a comfy spot by crawling under the hood into the engine itself. Of course, that’s all fine and good until you turn the key and it becomes a much less comfy place. So this winter, avoid giving your local cats an unexpected and unwelcome ride by knocking on the hood a couple of times before you start out. And send the picture above around your social networks. This is one message that could stand to go viral.

For more on cat safety in the winter:

Top photo: Cat on a Car, by Shutterstock.

Posted in In The News, Catster Tips, Pix We Love,