Next on The Scoop: 5 Professional Services My Cats Provide Me for Free
Pet Parenting

When Ghosty misbehaves, my husband no longer puts her in a quiet room to "think it over."

I have two pretty clear memories of being put in timeout as a child. In the first, I’m about 4 or 5 years old, and I’m at a relative’s house when they banish me to a creepy basement room that I was sure was full of spiders and possibly ghosts. It was quite terrifying. In the second memory, I’m a little older and my mom has told me to sit on a chair for five whole minutes. I complain, whine, and repeatedly insist that my time is up.

In both cases, I don’t remember what I was in trouble for — and I’m pretty sure my kitty, Ghost Cat, feels the same way when my husband puts her in a timeout. I think all the meowing she does translates to “you’re the meanest Dad ever! I didn’t even do anything!”

The scenario goes something like this: My husband and I are relaxing in front of HBO when my precious Ghost Cat decides to attack our Ikea ottoman. I don’t know what Ghost Cat’s got against the Ektorp, but she has been waging a merciless war against this thing since we got it. She’ll flop on her back when we’re not looking and shimmy until her front paws are positioned beneath the skirted footstool, which sits a few inches off the ground. My husband and I hear the damage before we see it — Ghost Cat’s claws grate across the underside of the Ektorp with audible viciousness, and then little bits of yellow foam shoot out from beneath the skirt.

When my husband gets to his feet, Ghost Cat shoots out from under the ottoman, looks right at us, and freezes before running off to the kitchen. My husband follows her, picks her up, puts her in another room, and closes the door. 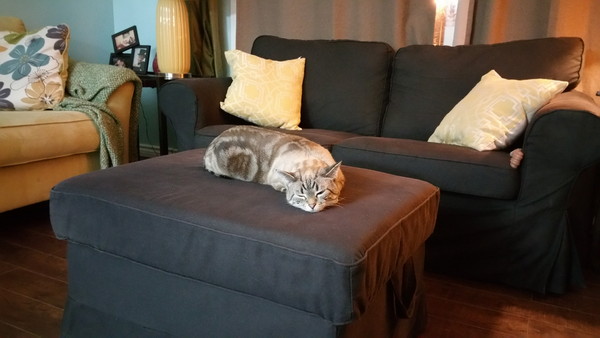 When she’s not attacking the ottoman, Ghost Cat finds other ways to use it.

Contrary to Ghost Cat’s dad’s belief, Ghosty does not learn anything from this exercise — except perhaps to meow loudly. She will just squawk on the other side of the door, and within a couple minutes one of us will open it so that she can cuddle with us on the couch and perhaps even nibble on a treat or two, having learned nothing from the experience.

Ghosty might not be capable of learning from this exercise in futility, but I am. I know from the reading I did when we adopted her that punishment techniques like this don’t work on cats (something that’s been well documented here at Catster).

My husband, however, is not the type of guy to take my word on pet-related issues, as he thinks I’m too soft. He’s as stubborn as Ghost Cat and will just dig in and defend his position if I don’t back up my claims with some kind of evidence. Luckily for me (and poor Ghosty), I have the whole Internet at my disposable and have armed myself with science-y info that supports my anti-timeout stance. 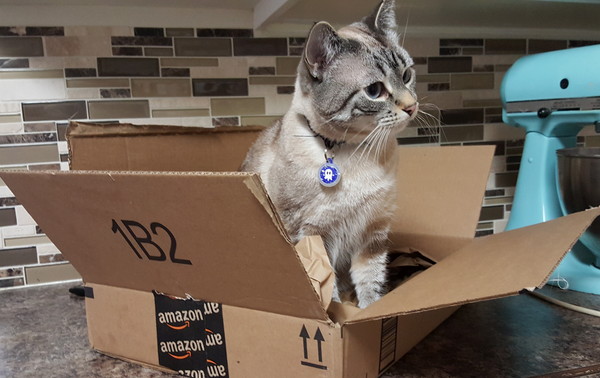 “Please don’t send me away!”

As I recently explained to my husband, the animal experts at Cornell University’s College of Veterinary Medicine say cats don’t respond well to punishments because they can’t see a connection between their actions and the punitive consequences. The folks at Cornell warn that punishments just make kitties fear their humans and can even lead to aggression.

The last thing I want is for Ghosty to fear my husband — we’re lucky that she doesn’t. Even after all this timeout business, she still loves him and climbs onto his lap every chance she gets.

Obviously (or maybe not, if you’re my husband), a timeout just isn’t a viable option for keeping Ghosty off the Ektorp. Instead, I’m trying to really tire her out with cat toys during the day so she doesn’t have as much energy to shred the ottoman at night. Because her two cat trees aren’t (and can’t) be positioned right next to the ottoman, I’ve placed her cardboard scratchers beside it and coated them in a healthy dose of catnip.

When you expend this much energy playing, you don’t have a lot left over for destruction.

We’re also working on some reward-based, positive reinforcement of good behaviors. If we see Ghost Cat attacking her scratcher instead of the ottoman, we’ll toss her a treat. That’s the kind of connection she can understand.

With science on my side, I’ve finally convinced my husband that a timeout doesn’t teach Ghost Cat anything. Now if only I could teach Ghost Cat to respect the efficient design of inexpensive Scandinavian furniture.