Next on The Scoop: N.Y. Shelters: People Adopt Black Cats as Halloween Props
Cats and Tech

Neko Atsume Is an Addictively Cute Japanese Cat-Collecting Game; Have You Played?

I have given over much of my life to caring for the cats in the game; here's how it works.

It started with a simple email from Catster executive editor (and Neko Atsume ace) Vicky Walker: “Play this game and write about it.” Sounds simple enough, right? My task was to download and play a free Japanese cat-collecting game app, Neko Atsume, which translates to Cat Collector. Play a cat video game for work. Cat geeks everywhere rejoice! It seemed so simple, so right.

Now look at me: I need my “high-class kibble” to bring all the cats to the yard. NEED. MORE. CATS. My fate is sealed. 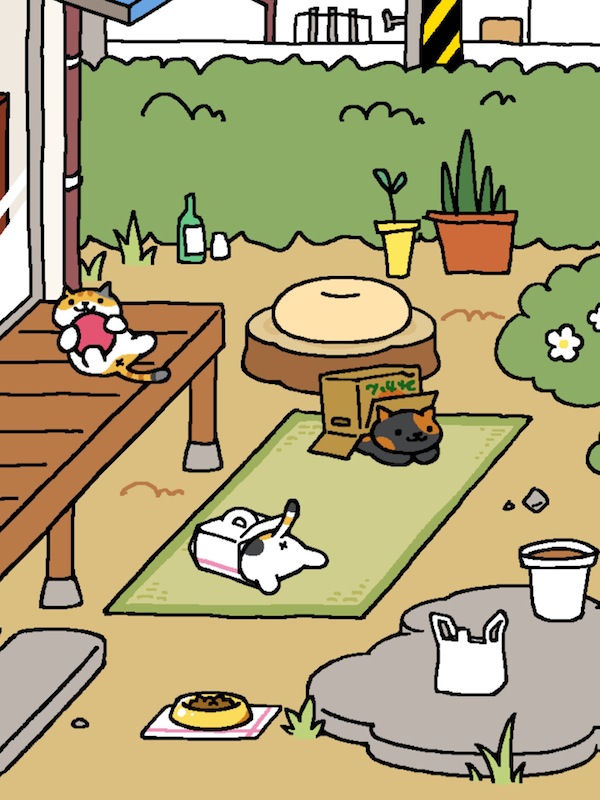 In the morning I feed Brandy, who is my living, breathing, fur-cat, then immediately get to feeding my “living,” “breathing” e-cats. I have caught myself feeling guilty for letting them go hungry overnight. The struggle is real!

My friend, writer s.e. smith, shares my obsession and captured some of the madness thusly: “Peak crazy cat person status. Thanks Louise.” 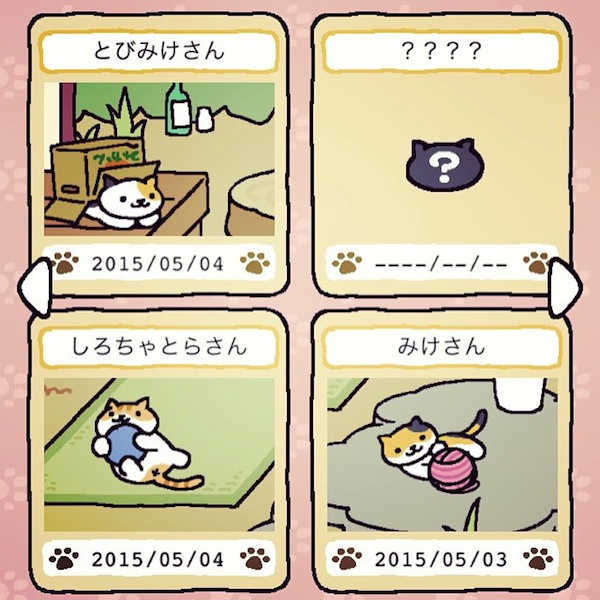 Brandy is judging both of us. Yet I regret nothing. 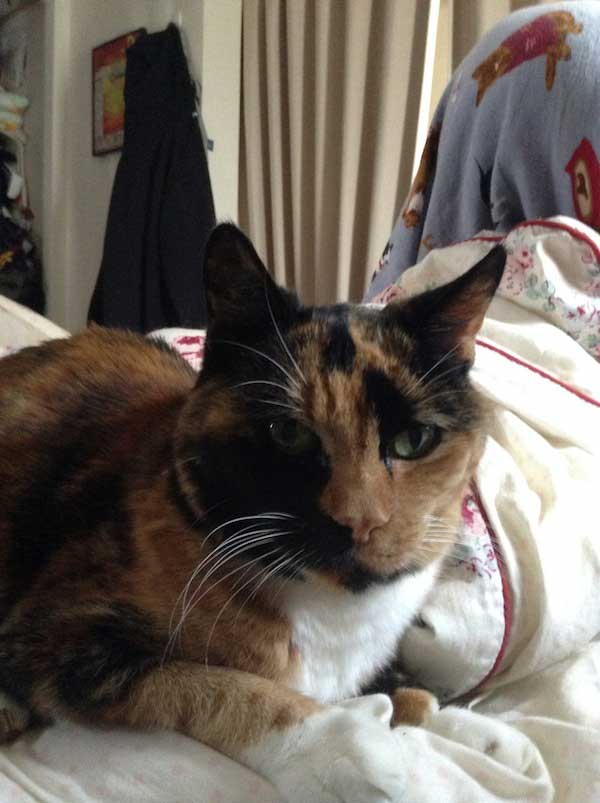 Brandy is not impressed.

You’re welcome, s.e., Vicky, and all the cat enthusiasts I’ve ushered into Neko Atsume. If you, dear reader, have ever wondered whether the lunatics are running the asylum at Catster, wonder no more.

But slow your roll, Louise. Let’s go back to the beginning.

What is Neko Atsume?

For those of you who don’t read Japanese, Neko Atsume is a free iOS and Android game in which you collect cartoon cats in your garden by putting out various food, toys, beds, and other cat-pleasing goodies.

How many cats, you ask? There are more than 40 cats you can collect, with some some rare cats thrown in there to give you incentive to spend bigger or smarter. Sure, you can get the small heating mat for 240 sardines, and a cat might curl up on it and toss you a smile. But spend 600 sardines for the stove heater, and you might get a visit from Bistro-san, the rare pizza-making cat. You’ll recognize him by his chef’s hat, apron, and smugly crossed “arms.”

Yet fancy toys aren’t the only key to happiness. You can see some pretty darn cute animation from less expensive toys. Half the fun of cat collecting is seeing what each cat will do with certain items. Currently, a tricolor cat I’ve named Nutsy is playing with a butterfly string toy that cost 120 sardines. Nutsy jumps and grabs at the toy, an action that mesmerizes me.

Get used to those cat butts, because they appear frequently in Neko Atsume — you’ll probably end up with a whole album of cat buttonholes when that’s the ONLY PICTURE YOU CAN GET OF A CERTAIN CAT.

Nermal, her mouse, and her butt.

There are niboshi, or regular old silver sardines, and there are the coveted kin niboshi, which are gold. Most cats who visit your yard will repay you for the honor of eating your food or playing with your toys in silver sardines, with the occasional gold one. If you earn enough silver sardines, you can buy some pretty sweet high-value items for your cats.

After a few days (or in my case a few hours) of playing Neko Atsume, you find you want more. The garden is nice, but what about that house just beyond the sliding glass door we spy to the left?

If you get enough gold sardines, you can expand your cat world. That is, you can open up the house and invite the cats in. Vicky did this, and she is now swamped in cats. 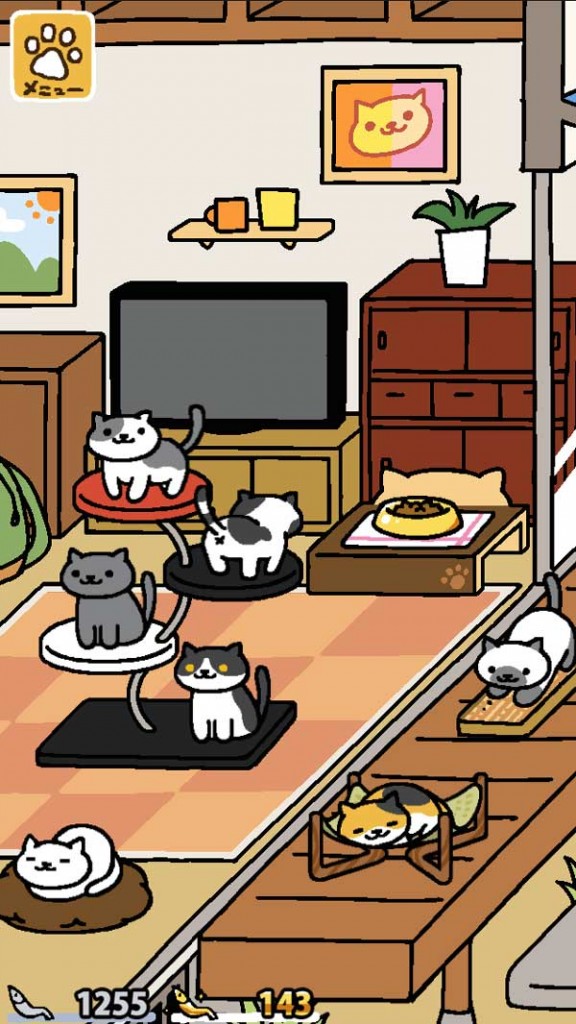 How to get the magical gold sardines

You can purchase gold sardines with real human money at the top of the kaimono (shopping) menu, or you can try to earn gold sardines by placing out big-ticket items for your cats. (The kitties are a bit arbitrary with doling out gold sardines, so again, just like real life, gold sardines are never a guarantee.)

I’m playing a pretty conservative game, but so far I’ve found the items that have earned me the most gold and silver sardines are, first, this U-shaped tunnel: 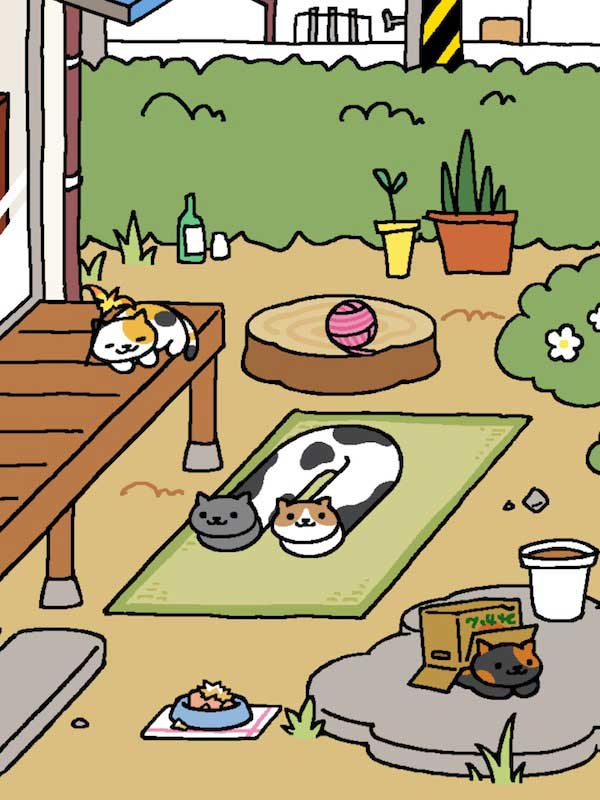 Second, multilevel cat towers like this two-tiered one here: 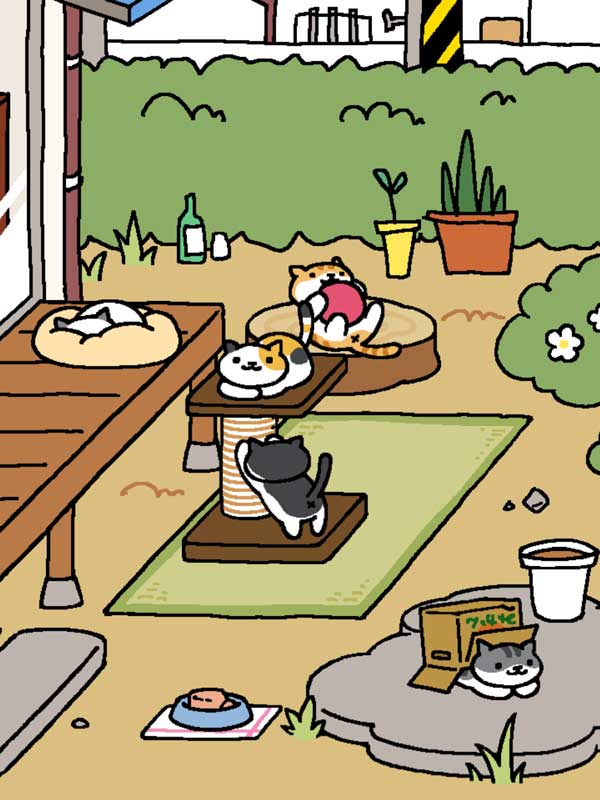 And lastly, for some reason that little red gumball or rubber ball. My cats can’t get enough of it.

Popular toys and cat comforts (such as the heater that costs 32 gold sardines) win you sardines — as well as the rare big-spender cats, too. It’s a good idea to rotate your toys and furniture in and out of your yard to tempt different cats. 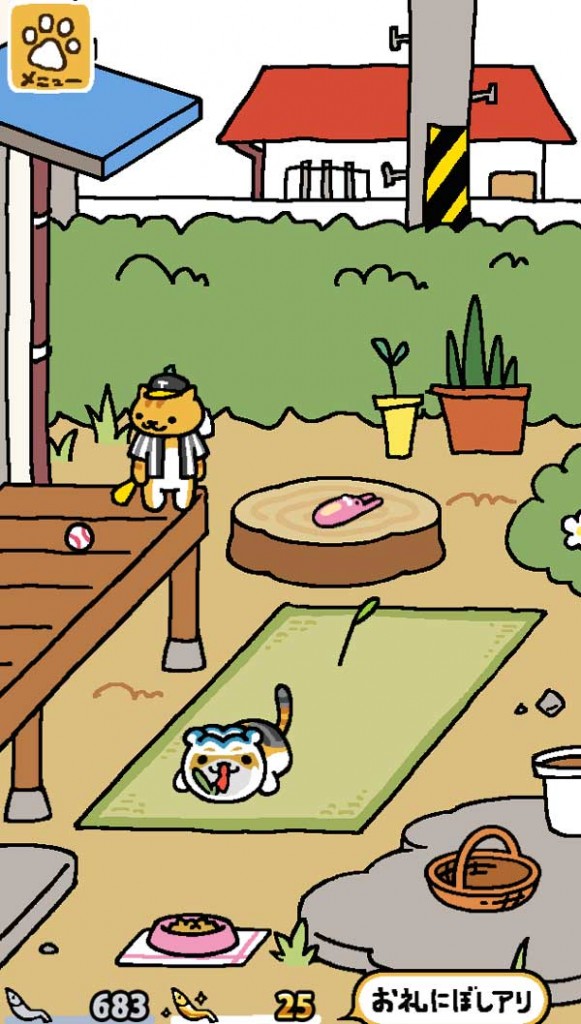 This rare sporty kitty turns up to play with a baseball.

Spend those gold sardines for the good food like the neko can (regular cat food), katsuobushi (can of sliced bonito), or koukyuu maguro neko can (“high-class tuna”) and you will be rewarded with cats and more sardines.

I am rather fond of this chubby white cat who comes around now and again to eat the ENTIRE plate of fancy sashimi I put out: 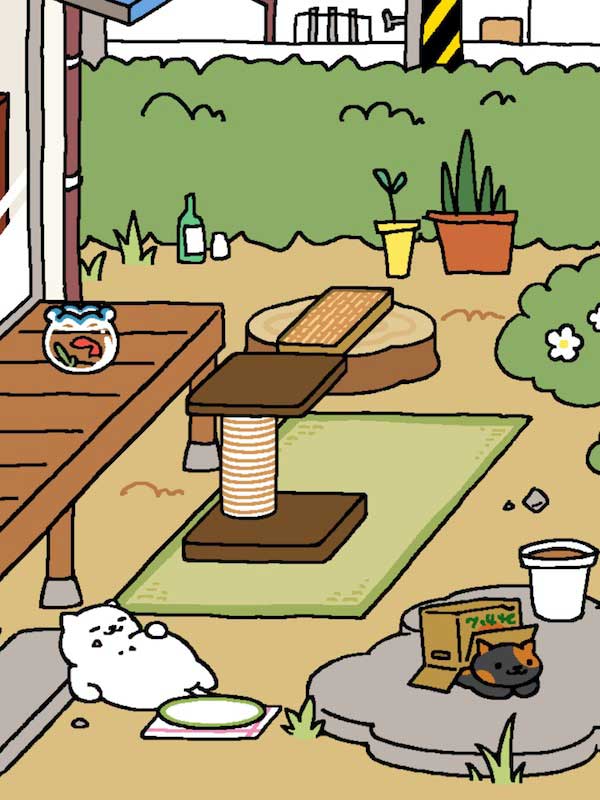 Look at that white cat pigging out on the food I left for him.

His name is Manzoku-san (Satisfaction) and in his profile he is described as “fluffy” and “impetuous.” And while Manzoku-san usually gobbles up all your food and lounges around, he is very Japanese in that he expresses his gratitude generously in sardines.

The cats eventually start to bring you gifts

Just the other day, an ash-colored cat I’ve named Meowvin brought me the husk of a cicada for my troubles. This is part of the “collecting” of Neko Atsume: You collect cat friends, who bring you gifts, and then you begin to collect gifts. Think of it like when your own kitty brings you a mouse-head present … only cuter.

The other part of cat collecting is of course taking pictures of your cats. I’ve become consumed with snapping the PERFECT picture of each of my cats for my cat album. And on the profile page for each cat, you get to choose the representative “best shot” out of all the pictures of your cat.

Is this what parents feel like when they try to take the ultimate shot of their toddler jammed inside a cardboard tube?

Neko Atsume is in Japanese, but it is pretty intuitive. I read Japanese poorly (and at the speed of tired slugs), but I was still able to figure it out fairly quickly. 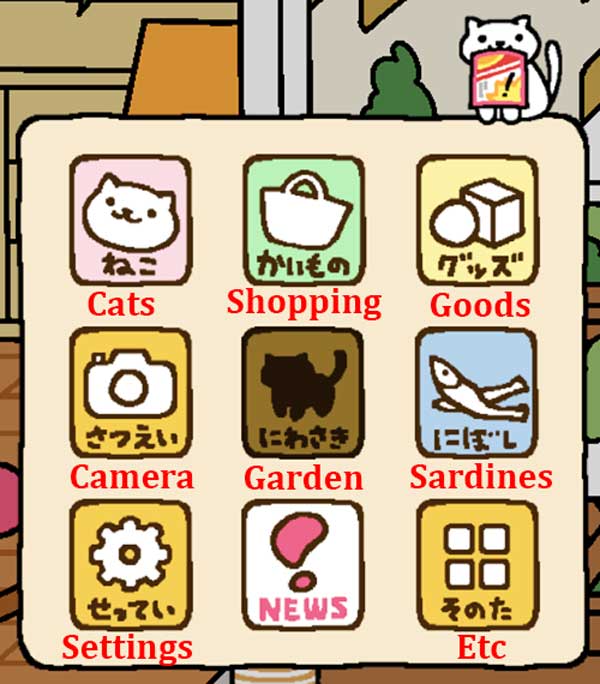 Here is a rundown of the main menu, which appears as a paw-print icon in the upper left corner of the main cat area.

Second row (left to right): Photography, where you can take pictures of the cats; Niwasaki or “In the Garden,” where you go back to the game/homepage; Niboshi or Sardines, where you buy food.

Fourth row (left to right): Random paw print that doesn’t work for me but is Home in other versions, News, and Tsūshin or Messages.

Most of these are pretty self explanatory.

How to get bonus food without even trying

A neat feature I figured out while trying to translate the game: You can get bonus fish by looking at the password for the day.

Click on News and at the top of the menu that pops up there is a cat with a sign. That’s the password. After you’ve looked at this, close the News menu and go to Messages. Click on the top button that appears — that button is asking for “password input.” Click it and you get extra treats.

Another fun feature of the game? Every cat that visits your garden has a profile. Click on Cat Notebook and you’ll see a gallery of all your cat friends.

Click on a picture of a cat, and the profile will open:

You can rename your cats and keep track of them. Cat profile courtesy Welcome to Wonderland

If you’d like to rename your cat, click on the oblong button at the top, and you can type in an English name in the pop-up menu. Click on the button on the right to confirm the name.

Your cat’s profile tells you (listed on the right, from top to bottom): your cat’s personality (Meowvin is “eccentric”), your cat’s fighting strength (how he gets the food or toys he wants in your garden), and how many times your cat has visited your garden (Meowvin has visited 17 times).

At the bottom is a list labeled Top 3 in English. This lists the top items that cat has used when visiting.

That’s really all you need to know about Neko Atsume. Certain high-priced items will bring more cats — like the “hot carpet” I just bought for 240 silver sardines — but the joy for me in this game is opening the app every few hours (or minutes) to see which cats have come to my yard and what they do with the gifts I’ve put out.

Like real cats, you can’t force the Neko Atsume cats to do anything. Cats seem to show up only when the app is closed. Opening the app is a new cat experience every time. I even have cats who I know have visited but can’t get a picture of. (Taking pictures of your cats using the Photography option in the menu has quickly become a favorite pastime.)

Vicky has bought a cat cafe at the next level of the game.

So enjoy cat collecting, cat lovers. Like the living furball snuggled up on your lap or couch right now, I think you’ll find the company of the “nekos” relaxing and rewarding.

About the author: Louise Hung is a morbidly inclined cat lady living in Yokohama, Japan, with her cat, her man, and probably a couple ghost cats. She also writes for xoJane. You can follow her on Twitter or drop her a line at IamLouiseMicaela@gmail.com.