Next on The Scoop: Texts from Mittens: The Back-to-School Edition
Catster Tips

Get Pumped: 10 Veterinary Facts About the Feline Heart

Cats' hearts are similar to those of humans; here are common disorders, tests, and treatments.

The heart is the main organ in the circulatory system. Its job is to pump blood throughout the body, supplying oxygen and nutrients to the tissues. You might be thinking, “Well, everyone knows that.”

But here are 10 more things you probably don’t know.

1. The feline heart has four chambers, similar to the human heart 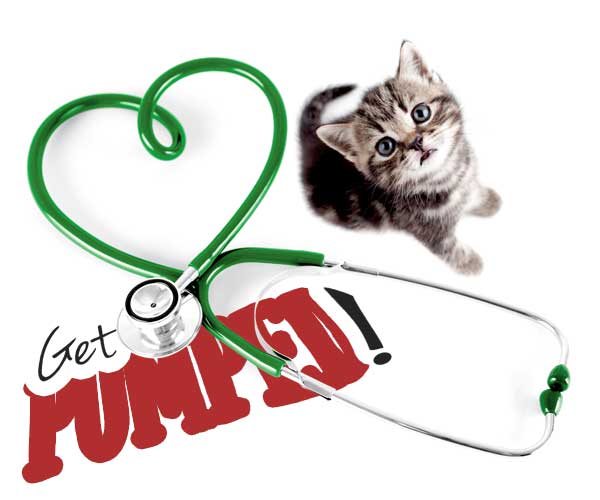 2. Listening to a cat’s heart with the stethoscope is a crucial part of a vet exam

Cats are often nervous during the veterinary visit, so it’s not unusual to find heart rates in the 200s. The rhythm should be regular, and the heartbeat should be easily heard.

The most common abnormality heard with the stethoscope is a heart murmur. A murmur is the sound of turbulent blood flow and might indicate something is amiss. The discovery of a heart murmur during your cat’s physical examination warrants further investigation.

4. Listening reveals only so much

Physiologic murmurs are benign and can be caused by things such as stress, excitement, pain, or fever.

The only way to tell if a murmur is benign vs. pathologic is to perform echocardiography (sometimes also called a sonogram, or cardiac ultrasound).

5. Echocardiography is best performed by a veterinary cardiologist

Yes, there are veterinarians that specialize in cat and dog hearts only. These cardiologists know exactly how thick or how thin the walls of each heart chamber are supposed to be, how fast the blood should flow as it travels out of the aorta and pulmonary artery, and how strongly the heart is supposed to be contracting. By viewing the heart using ultrasound and taking a variety of measurements, the cardiologist can determine whether heart disease is present.

6. The most commonly diagnosed heart disease in cats is a condition called hypertrophic cardiomyopathy

In cats suffering from cardiomyopathy, or HCM, the walls of the heart become progressively thicker, with one particular chamber, the left ventricle, usually becoming the most affected.

Think of the left ventricle as a coffee mug. Now imagine the walls of the mug becoming thicker and thicker, growing inward. The mug would hold less and less coffee.

In HCM, the ventricle holds less and less blood. If the ventricle can now hold only half as much blood, the heart will try to compensate by pumping twice as hard to achieve the same effect. Eventually, the muscle starts to give out, and congestive heart failure can develop.

7. A variety of drugs are needed

Cats diagnosed with HCM are usually prescribed a variety of medications aimed at slowing the progression of the disorder.

Many cats do well for many years after the diagnosis with no symptoms at all. Other complications, however, can arise before heart failure ever develops.

8. HCM’s most serious complication is something called aortic thrombo-embolism

In aortic thromo-embolism, or ATE, a blood clot develops in the left atrium. A piece of the blood clot breaks free, travels down the aorta, and gets lodged at the very end, where the aorta branches to supply the legs with blood. Cats become acutely paralyzed in the rear legs as a result.

This is a truly devastating complication that carries a very grave prognosis. Sadly, as a feline practitioner, I have the terrible misfortune of seeing two or three cases of ATE a year, and every case ends disastrously. 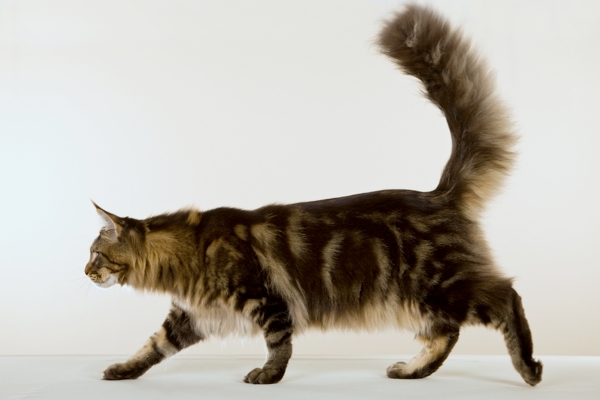 9. HCM can strike any breed of cat

However, Maine Coons and Ragdolls are predisposed to the disorder. Fortunately, the reason for their susceptibility was discovered several years ago: a mutation in the gene that codes for a specific protein in the heart.

A genetic test has been developed to screen cats for the disorder. The test requires either a cheek swab or a blood sample. Responsible cat breeders can now test their cats for this mutation and use selective breeding techniques to hopefully eliminate the gene from the population.

10. Some kittens have heart murmurs that disappear as they mature

A persistent murmur in a kitten, however, should be investigated, as congenital heart diseases occasionally do occur. The sooner they are diagnosed and treated, the better the prognosis.

About the author: Dr. Arnold Plotnick is the founder of Manhattan Cat Specialists, a feline-exclusive veterinary practice on Manhattan’s Upper West Side. He is also an author of The Original Cat Fancy Cat Bible. Dr. Plotnick is the former Ask the Veterinarian columnist for CAT FANCY magazine, and is a frequent contributor to feline publications and websites, including his own blog, Cat Man Do. He lives in New York City with his cats, Mittens and Crispy. Follow him on Facebook and Twitter.